This is a universal question: Are bailouts being used to the benefit of society of particular interests? 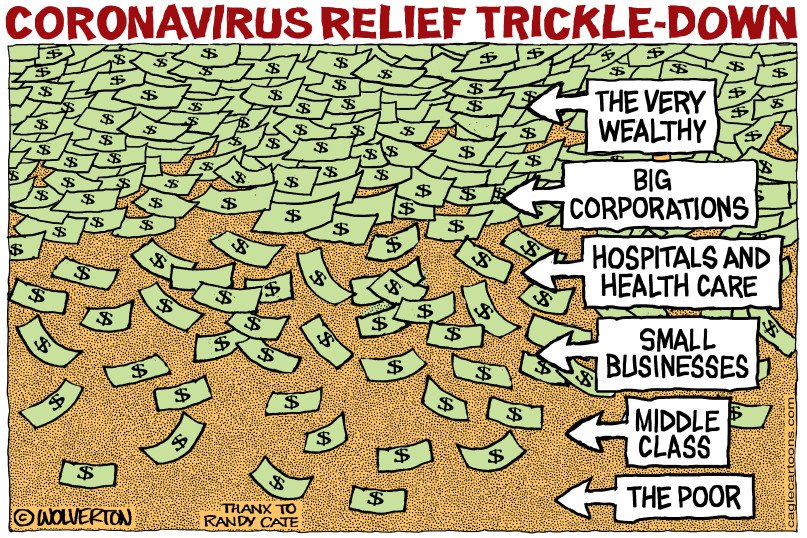 Neil Irwin had an interesting New York Times piece on how concerns about moral hazard in the bailout may damage the recovery. The gist of the article is that the fear that bad actors will be wrongly rewarded will prevent us from spending enough money to get the economy back on its feet. Irwin’s point is very important, but it does require some further examination.

We might agree for example, that it is silly to oppose an airline bailout because it will help shareholders if the bailout will also save tens of thousands of jobs. The priority should be to preserve jobs and, as much as possible, keep viable corporations intact through this crisis. This is not only to keep employment as high as possible during the crisis but also to preserve the basis for a strong recovery.

But let’s put some meat on the bones here. If we stay with the case of an airline bailout (which actually had some pretty good terms for workers, that were imposed as a result of pressure from industry unions), let’s imagine that the airlines planned to use much of their bailout money to pay out dividends to shareholders. Suppose that they plan to continue to pay CEOs salaries in the neighborhood of $20 million a year. And, they have plans to lay off a large portion of their workforce.

Do we still think it’s a good idea to bail out the airlines? I’m slightly caricaturing the story here, but the basic problem arises in all sectors. We absolutely should place a priority on sustaining the economy through this crisis, but we also have to ask the question of who is benefiting and how much?

That is unfortunate, but we live in a society where, for the last four decades, those on top have taken every opportunity to game the system to enrich themselves at the expense of everyone else. We see this with CEOs who take advantage of the corruption of the corporate governance process to get paychecks that are two to three hundred times the pay of ordinary workers. We have drug companies that constantly game the patent system to extend monopolies that allow them to charge prices that can be tens of thousands of percent above the free market price.

We have a financial industry that makes tens of billions of dollars annually by sneaking fees and penalties into contracts with their customers. And, we have a whole industry, private equity, that has made many of its partners incredibly rich by financial gaming at the expense of the creditors and workers at the companies it buys.

This is the world we lived in when the pandemic hit. In this context is there any reason to trust that the bailout money will serve the overall good of the economy and society?

The fact that Donald Trump has explicitly resisted Congressional efforts at oversight of the bailout hardly helps to promote trust. In fact, given his past behavior and the behavior of top officials in the Trump administration, it is reasonable to assume Trump’s family, friends, and political supporters will disproportionately be the beneficiaries of this bailout.

Furthermore, the punitive steps towards ordinary workers taken by Trump and other Republican officials also undermine any idea that we share a common interest in a bailout that keeps the economy moving. Trump has effectively required tens of thousands of workers in meatpacking plants to return to work in facilities that are unsafe, and without receiving any hazard pay.

Senate Majority Leader Mitch McConnell explicitly said that he wants to force states to declare bankruptcy so that they can default on the pensions that were part of their workers’ pay. McConnell has indicated that he also would like to see cuts to pay of current union workers, but he apparently is mostly anxious to take back the pay for work already done. Trump seems about to pull the same trick with the postal workers, who somehow got left out of the rescue packages approved by Congress. In the same vein, several Republican governors have told employers that they want to be notified of any workers who do not return to work when businesses reopen so that they can cut off their unemployment benefits.

The “we’re all in this together” spirit that might make a sprawling free-flowing bailout seem reasonable does not exist. The rich are not only acting to preserve their wealth in this crisis, but they are also using every opportunity to stuff their pockets as full as possible. In addition to all their standard scams, they are even ripping off the relief effort, charging exorbitant prices for needed drugs, medical equipment, and protective gear.

The idea that the distribution of income was simply the result of the free workings of the market was always a fairy tale, believed only by children and liberal policy wonks. But it is especially absurd as we see the pandemic wreck its havoc and the government choosing which groups will survive more or less in tack or even prosper from the disaster.

In effect, the pandemic has thrown the whole deck of cards up in the air. If we just let the market work its magic in this environment, it will ruin almost any industry or company – in addition to the airline industry, aircraft makers (i.e. Boeing), hotel chains, restaurant chains, hospitals losing payments for elective procedures, health insurance companies, department stores, and retail chains, and many others – would all be going belly up.

We will save most of the companies in hard-hit sectors as a political decision. We will let millions of workers and their families flounder, losing homes and apartments, retirement savings, health care insurance, and other basics as a separate political decision. The idea that this has anything to do with the market is crap. The people with political power are using it to protect and enhance their wealth. And, they are using that power to kick ordinary workers in the face.

Yeah, there are very good reasons for people not to like the current bailout. They are not being irrational.

Crossing the Rubicon of monetary financing. COVID-19’s economic impact on crumbling GDPs, collapsing tax revenues and ballooning fiscal deficits will be much larger than what has been reported thus far. Any hesitation in throwing everything […]

We may well be witnessing the demise of world dominance by the white race. The rest of the world may not be as anxious about this as we are. To the contrary. Mathew D. Rose […]