This hangover of the austerity mentality is both unnecessary and inaccurate

Dominic Caddick is an Assistant Researcher at the New Economics Foundation

With the economy reopening, it looks like the UK is slowly emerging from the economic fallout of the pandemic. As the economy recovers, the government is bringing in more money from tax revenues to cover its costs, meaning that government borrowing has fallen compared to the same time last year. This is a prime example of how government borrowing can fall simply through a strong economic recovery — and yet this government has wasted no time in arguing that we must cut costs to pay back our pandemic debt and aid public finances. So far this has looked like increasing student loan repayments, cutting university arts funding, privatising Channel 4 and not funding schools enough to catch students up on missed learning.

Economic conditions, however, mean this hangover of the austerity mentality is both unnecessary and inaccurate. In fact, the UK is already comfortably paying the interest on its pandemic debt and is due to repay £240m of that debt in full today. So why such a commotion about needing to pay back our debts?

The supposed problem is that, at the moment, tax revenues are not enough to finance our spending and debt repayments, which means that we have to borrow to meet these costs. In essence, that means we are paying back debt by issuing new debt — a commonplace practice that economists call a ​‘rollover’. Importantly, rolling over our debt does not add to the debt stock by itself: it is simply replacing old debt with new debt. At the moment, this is to our advantage, as the interest rate we pay on new debt is lower than on most older debt. So, currently, by rolling over debt we’re actually making the same amount of debt cheaper to sustain.

The main concern with rolling over debt is that it could become financially unsustainable if interest rates rise at a greater rate than economic growth. But reducing the amount of debt we rollover when interest costs are very low, and therefore the conditions are most favourable, is nonsensical at a time when the government’s top priorities should be supporting people and businesses through the end and aftermath of the Covid crisis, and preventing long-term economic scarring.

In addition, a side effect of the Bank of England’s quantitative easing programme — where the Bank creates new reserves in order to buy government bonds from financial institutions to inject money into the economy — is that our borrowing costs are even cheaper. This is because the Bank pays interest at a lower rate on the new reserves than it receives on the government bonds it owns (on average) and therefore makes a profit. As the Bank is part of the public sector, these profits are refunded to the government — thus making the government’s debt costs cheaper.

In fact, the Bank of England has bought more debt than we have borrowed during the pandemic. This means that the Bank has control over a large proportion of the interest on our debt. So even if interest rates were to rise, there would be many options for the Bank to make it more manageable (a subject of future NEF research).

Given the government consistently issues new debt while paying off old debt, the only aspect of debt that really matters is its cost. The level of debt is irrelevant without considering the cost of the interest on it. This is particularly important, as the level of debt and the cost of debt do not have a clear relationship and have often diverged over the past 60 years, as shown in the graph below. 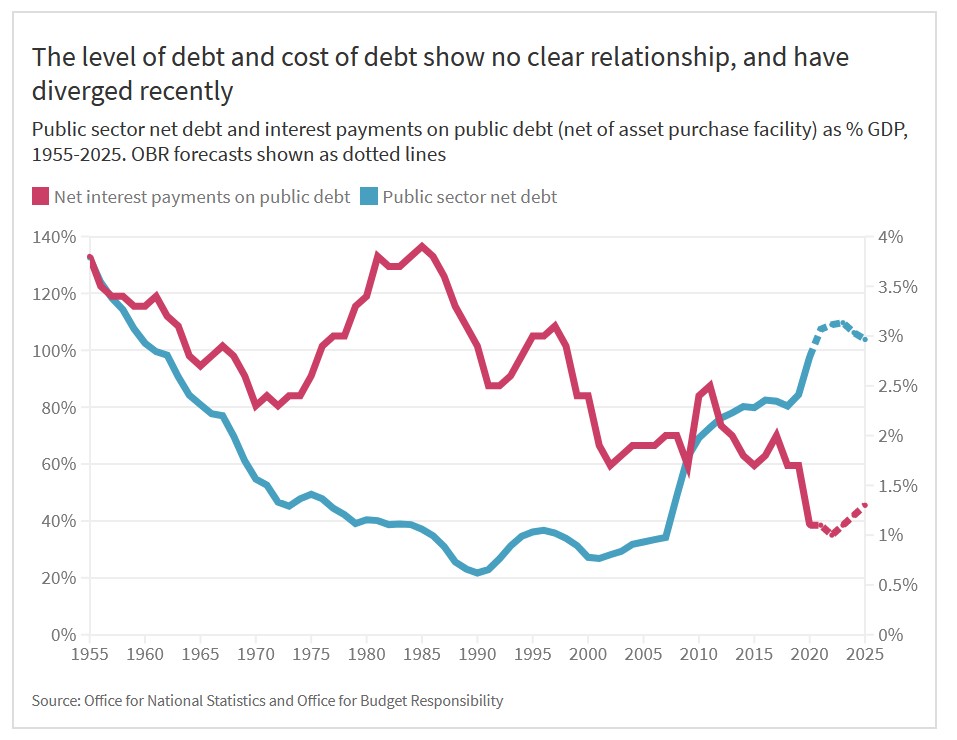 This makes focusing on the amount of government debt — the ​‘debt level’ — very misleading. Yet, after last month’s public sector finance data was released by the Office for National Statistics, seven out of eight major UK news outlets chose to report on just the debt level with no mention of how little that debt actually costs. Such reporting can inadvertently help to manufacture consent for unnecessary government cuts to public services, by invoking fear about high debts that in reality carry little risk. When politicians focus on rising levels of public debt, with no attention to falling costs, it’s a useful political tool to justify ideologically-motivated cuts.

We know that the conditions to roll over our debt are good, so the choice to cut spending is a voluntary one. If and when cuts do happen, we should make sure that harms are minimised, and inequality does not increase. But, while news outlets focus on the level of debt, and the government takes advantage of this to justify underfunding education and culture, our priority should be to stand firm against the idea that these sorts of cuts are or ever were necessary.

Chicago economics is a dangerous pseudo-scientific zombie ideology that ultimately relies on the poor having to pay for the mistakes of the rich. Lars P. Syll is an economist at the Faculty of Education and […]

The EU is moving towards a regulation of the Gig Economy. Lobbyists in Brussels are spending fast and heavy. What is on the table up to now? Ben Wray is a freelance journalist leading BRAVE […]

In his speech to COP26, Barack Obama told the world that the reason we’re not tackling climate change is because of ‘nationalism’. This comment may have been ignorance, myopia or bad faith, but it is […]