There is evidence that Germany is likely to shift toward wage restraint in the coming years. If other eurozone countries are unwilling – or unable – to mimic Germany’s wage moderation, distortion of real exchange rates in the eurozone could follow, posing a threat to the single currency.

Donato di Carlo is a Senior Researcher, and Martin Hoepner a Professor, both at the Max Planck Institute for the Study of Societies, Cologne 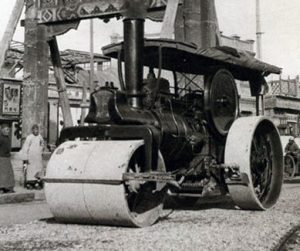 Disruption to global supply chains and Russia’s invasion of Ukraine have pushed up energy and food prices to levels unseen since the 1970s – leading central banks across the world to start hiking interest rates more aggressively. With eurozone inflation reaching 8.6% in June, the ECB has eventually raised its key interest rate by 50 basis points as it confronts surging inflation despite mounting risks of an economic slowdown.

There are now two key preoccupations in the minds of academic and policy observers across Europe. First, there is fear that inflation may become chronic and fuel uncontrolled wage-price spirals. Second, concerns have risen that eurozone countries’ heterogeneous wage-setting regimes will translate, again, into greater inflation differentials across countries, undermining the ECB’s capacity to govern the single currency.

Given Germany’s past trajectory of sustained wage restraint in the eurozone and its relative weight in the determination of euro-wide inflation levels, in this brief contribution we attempt an educated guess at Germany’s future wage developments. We do so by building on political economy research on the institutional characteristics of the country’s wage-setting system.

Wage restraint in Germany since the beginning of the euro

A certain consensus exists among academics that nominal wage developments across eurozone countries should develop in line with the so-called golden rule of wage-setting. Accordingly, to ensure price stability and avoid country-specific deviations in inflation levels, the growth of national nominal unit labour costs should – in theory – be anchored to the ECB’s inflation target (below but close to 2%).

The figure below points to two key outcomes that have characterised Germany’s wage policy. First, during the euro’s first decade, Germany experienced marked wage restraint, with unit labour costs growing significantly below the common inflation target. Since 2011, there has been sustained real wage growth and a mild rebalancing interrupted by the pandemic. Yet this has not sufficed to absorb all the previous undervaluation. Second, there has been mounting variation in sectoral patterns of wage growth, with unit labour costs growing much faster in the manufacturing and financial sectors and much slower in construction, the public sector, and low-end services (mostly hospitality and wholesale/retail trade). 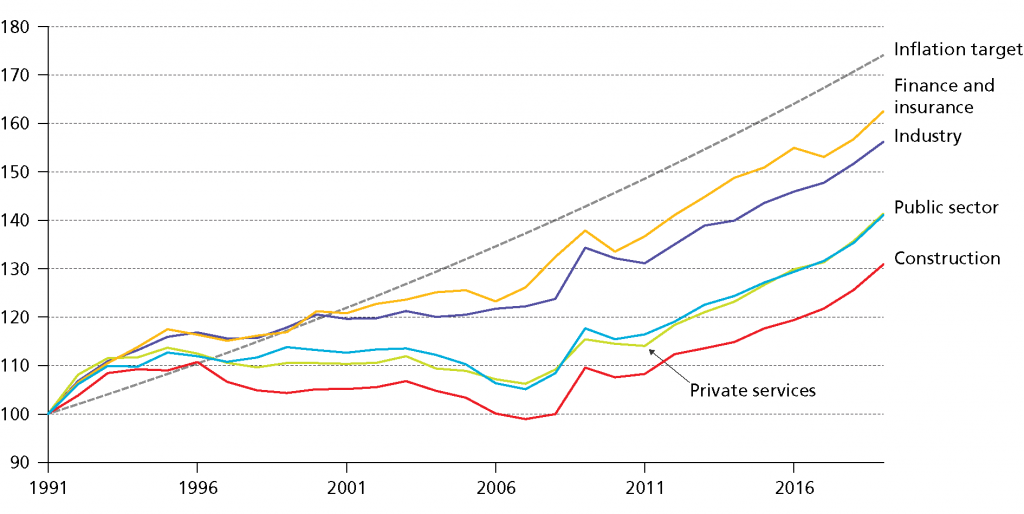 These observations point to the fact that, as shown in our previous research, Germany can no longer be considered a country with coordinated wage-setting led by the export sector – a process understood as pattern bargaining in academic parlance.

Given the evident erosion of coordination institutions in the German labour market, it is important to analyse the specific institutional setting within which wage-setters bargain in the different sectors of the economy. We analyse the five main macro sectors of the German economy: the manufacturing export sector; low-end private services; high-end private services; the public sector; and construction. For each of these, we attempt an educated guess at future wage developments based on the constellation of interests and institutions that shape wage outcomes.

In the manufacturing export sector, the mode of wage formation has changed since the 1990s. The previous model of sectoral wage co-ordination has given way to a multi-level system that emerged through several phases of organised decentralisation.

Institutionalised practices of firm-level competitive corporatism are now the norm. Employees’ representatives at company level have an interest and mandate to ensure job security in the firm, which they exchange with pro-competition wage restraint with their direct employers. As a result, the German export sector reacts quickly to a deterioration of international competitiveness as firm-level cartels between capital and labour produce self-interested wage moderation.

Given this constellation, a wage-price spiral is unlikely to emerge in exporting industries. For the autumn collective bargaining rounds in the metal and chemical industries, one could well expect an increasing conflictual environment (albeit low in international standards).

However, wage settlements are likely to be oriented – at best – to the golden rule, without fully offsetting the rise of inflation. The pattern for future agreements may be set by the collective agreement of the chemical and energy unions, which envisaged a 5.3% average wage increase. The recent agreement in the steel industry even falls short of this benchmark when considered on an annualised basis.

When it comes to the low-end private services (i.e. hospitality and wholesale/retail trade), established literature has described the erosion of collective bargaining institutions as well as export-sector employers’ opposition to legal provisions that would make collective bargaining binding on all employers.

Liberalisation has therefore led to considerable wage restraint in the low-end services over the past two to three decades – to an extent that is exceptional in western Europe. As a result, in the service sector Germany increasingly resembles a liberal market economy where weak and unskilled workers’ wages depend on the price mechanism. Considering there is a reserve of around 900,000 employable people, one should not expect significant wage-push inflation driven by low-end services.

The situation may be different for the highly productive, dynamic services represented by the banks and insurance companies in the figure above. Here, a shortage of skilled workers and (individual and collective) high bargaining power speak in favour of higher real wage developments to compensate for the loss of purchasing power. However, the most recent collective agreement for the insurance industry (April 2022) envisages a meagre 3% wage rise for 2022 and 2% for 2023. At any rate, it must be considered that the high-end services sector in Germany is smaller and underdeveloped when compared with other countries and is therefore unlikely to affect overall developments.

As shown in our research, wage developments in the public sector can be comprehended only in terms of fiscal policymaking enacted within the polity’s fiscal institutions. Here, Germany’s fiscal federalism constrains the capacity of subnational governments to grant highly generous wages in the public sector. This is because most of public employees in Germany are employed by the states (Länder) and municipalities due to the high degree of decentralisation of competences within the federal polity.

Yet, while being responsible for mandated public expenditures, subnational governments have little de jure capacity to alter their fiscal revenues at will (only municipalities dispose of own resources) due to the centralisation of tax policy at the federal level. Since the public sector wage bill represents one of the single largest items of subnational public finance, states’ finance ministers and municipal treasurers have come under enormous pressure to contain public sector wage increases and make fiscal savings.

Hence, wage growth in the German public sector remains structurally constrained by the chronic underfunding of the poorer subnational governments and contingent on the overall fiscal stance of the general government. Considering the recent calls by the Federal Finance Minister for a return to fiscal discipline and debt reduction – besides some minor ad hoc bonuses in specific professions (e.g. nurses and doctors after the pandemic) – one should rather not expect wage-push inflation in the public sector.

From a long-term perspective, construction workers in Germany have been among the most penalised in Germany. Since the Bundesbank’s decision to raise interest rates to unprecedented levels in the early 1990s, the real estate market (highly sensitive to the then increased costs of mortgages) has experienced a steady decline, and so have sectoral wages (see figure above).

Considering the reported shortage of construction workers and the steady increase of housing prices and mortgages, one would have expected sectoral wages to expand significantly (as for instance occurred in southern Europe before the financial crisis). Yet, real wage growth in the construction sector, albeit sustained, has been far from spectacular so far.

Here, wage increases in the construction sector are kept down by high levels of transnational wage competition ensuing from the posting of workers (see the ninth chapter in this contribution). In fact, last October’s sectoral wage agreement envisaging a meagre 3.3% rise for 2022 and 2% for 2023 was accepted by both sides via arbitration. In all, while future sectoral negotiations may well be more conflictual, not many elements currently suggest the spread of a price-wage spiral in the construction sector.

An endurance test for the eurozone

The return of global inflation exposes the eurozone to a challenging endurance test – yet again. The main problem, however, is not so much chronic inflation driven by a wage-price spiral but rather mounting inflation divergence across EMU-participants. It is no surprise, in fact, that mounting intra-EMU divergence in prices and wage inflation was a major preoccupation of ECB policymakers during the runup to the global financial crisis.

A long-standing finding of comparative political economy research since the stagflation of the 1970s is that a country’s capacity to absorb price inflation hinges on its labour market institutions’ capacity to produce wage restraint. In this sense, while Germany can no longer be considered a coordinated economy, our (and others’) analysis points to the emergence of functionally equivalent mechanisms for wage restraint playing out at the sectoral level.

Hence, if our educated guess is correct, Germany is likely to shift, again, toward a trajectory of wage restraint in the coming years. If the other eurozone countries are unwilling – or unable – to mimic Germany’s wage moderation, the ensuing divergence in intra-EMU inflation levels (and real exchange rates) could undermine the ECB’s capacity to govern the EMU through one-size-fits-all policy instruments and pose a renewed threat to the existence of the single currency.

Politicians could attempt to bring European social partners to the supranational negotiating table with the aim of engineering a pan-European forum for transnational wage coordination. Yet, it remains hard to believe such a process could emerge due to collective action problems and conflicts of interest among the social partners. Still, such a process would contribute to raising awareness on the need for wage-setting coordination within an incomplete single currency with neither fully coordinated nor atomistic labour markets.

Gordon Morgan, Energy researcher for Common Weal, looks at what Scotland needs to do to take the IPCC report seriously and decarbonise the country rapidly When you look at a nation being reborn, as is […]

Eliane Glaser – The left is having a moment. Here’s how to make it count

“Democracy is not just about taking control. It’s also about having clearly distinguished political agendas to choose between. Right-wing populism attaks the very concept of a democratic forum in which a genuine alternative could challenge […]

What lies in China’s economic future? Michael Roberts is an Economist in the City of London and a prolific blogger Cross-posted from Michael’s Blog Much has been made recently of the slowdown in population growth in […]