The EU is deeply concerned about an illiberal justice system in Poland and Hungary, but enjoys the benefits of a fascist judicial system in Spain.

Duroyan Fertl is a political analyst and a former Political Advisor for Sinn Féin and GUE/NGL in the European Parliament. His blog is Hintadupfing 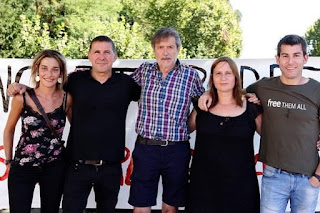 On December 14, the Spanish Supreme Court unanimously ordered a re-trial of the contentious 2011 “Bateragune” case against Arnaldo Otegi and other Basque pro-independence leaders, on charges for which they have already served prison sentences. The kafkaesque decision makes a mockery of the rule of law and is a reminder of the entrenched power the political right holds within Spain’s judiciary. The EU has made a great show of condemning breaches of the rule of law in Poland and Hungary. Will it ever act on Spain’s abuses?

In 2011, Otegi – now general coordinator of the Basque abertzale (pro-independence) left party EH Bildu – was convicted along with Rafa Díez, Arkaitz Rodríguez, Sonia Jacinto and Miren Zabaleta, of trying to re-launch Batasuna, a political party declared illegal by Spain over links to the armed group Euskadi Ta Askatasuna (ETA – “Basque Homeland and Freedom“). They had been arrested in October 2009 during raids on the headquarters of the left-wing pro-independence trade union LAB, and charged with trying to “re-form the leadership of Batasuna on the instructions of ETA”.

Otegi has always maintained his innocence concerning what became known as the “Bateragune” case – after the Basque word for “meeting place”. He argued that he and his co-accused were in fact meeting to design a new peace initiative to end the decades-long bloody violence plaguing his homeland. The arrests also brought a huge public response in the Basque Country – four days after the arrests, 50,000 supporters demonstrated for their release – and, despite the arrests, a new Basque peace initiative was indeed announced at a press conference of 100 abertzale left leaders the following month.

The logic of Spain’s charges is even more grotesque when you consider that, more than any other individual, Otegi was responsible for convincing ETA of the need to end their armed campaign. He was key in initiating and guiding the broad democratic discussion among pro-independence political activists that achieved firm popular support for this strategy. World-famous anti-apartheid and human rights activist Desmond Tutu described Otegi as “the leader of the Basque peace process”.

Nonetheless, Otegi and Diez were sentenced to 10 years jail each, while Sonia Jacinto, Arkaitz Rodriguez and Miren Zabaleta received eight years. The Supreme Court later reduced Otegi’s sentence to six and a half years, which he served in Logroño prison before being released in 2016. Meanwhile, ETA declared a unilateral ceasefire in 2010, announced its decommissioning, apologised for the harm it had caused, and by 2018 it had completely dismantled, ending all its activity after a five-decade campaign.

Otegi’s legal team appealed his sentence to the European Court of Human Rights (ECHR), which in November 2018 overturned the original trial for having violated his fundamental rights. In particular, the European court concluded that Article 6.1 of the European Convention had been violated due to the court’s lack of impartiality, with at least one judge having made comments indicating a pre-existing prejudice against Otegi. Nonetheless, it still took the Spanish courts almost two whole years to act on the decision of the ECHR, finally annulling the convictions in July this year.

By this time, Otegi and his co-defendants had already served their prison sentences and been released. It was only with the annulment of the trial in Spain, however, that a further part of Otegi’s sentence – imposed after he left prison – was ended, lifting a ban on him from holding public office. Predictably, when the annulment of Otegi’s ban on holding public office came, it did so just three weeks after the Basque Autonomous Community elections. While EH Bildu achieved its best result ever, finishing as the second largest party with 28 percent of the vote, Otegi was unable to stand as a candidate.

While Otegi’s credentials as peacemaker are widely recognised, the Spanish state’s policy remains that “everything that surrounds ETA is ETA”. This flawed outlook saturates Madrid’s attitude to the Basque people. In 2016, several Basque youth in the small pro-independence town of Altsasu got into an argument in a bar with two members of Spain’s paramilitary Guardia Civil, in civilian clothes. While video evidence suggests the altercation went no further than heated words, eight youth were charged with “terrorism resulting in injury” and posing a “terrorism threat.” Their families are still fighting to have them freed.

In the Bateragune case, the Spanish prosecutor’s office sought a re-trial on the basis that a mere “procedural error” should not lead to Otegi being cleared of the charges. All sixteen judges of the Spanish Supreme Court’s criminal chamber apparently agreed, and unanimously ordered the repetition of the trial. Such a decision – to re-hold the trial, after the ECHR has overturned it, and the sentences have already been completed – is unprecedented, and exposes the shameless abuse of the Spanish court system as a weapon against Madrid’s critics.

The decision is a divisive issue even within the traditionally conservative judiciary, with Spain’s National Court recently arguing against a re-trial. The new trial will be held, not only after those accused have already finished their sentences, but also very much after the fact. In reality, Batasuna was never rebuilt, and ETA has lain down arms and long since ceased to exist – precisely because of the efforts of those once again accused of terrorism, and despite the repeated interference of the Spanish state.

Why, then, has the Supreme Court decided to re-open the case? One reason is that trials of the Basque independence movement in Spain are never simply legal – they are always political. The persecution of Otegi is not only an infringement of his individual rights, it is also an attack on the Basque movement’s peaceful path towards independence, and a further warning to anyone – Basque, Catalan or otherwise – that in the Spanish state, Madrid’s authority remains absolute.

On this front, at least, it certainly won’t work. Responding to the Supreme Court’s announcement, Otegi accused the courts of wanting to criminalise the leadership of the pro-independence nationalist left, adding “They didn’t tame us, they didn’t bend us, they won’t subdue us! Smile, we shall overcome!”, while Arkaitz Rodríguez pointed out that “12 years after our arrest, after having spent 6 years in jail in an absolutely unfair and illegal way, after a European annulment and without even that organisation already existing, they have decided to try us again for belonging to ETA. Democracy? What democracy?”.

The court’s move could also destabilise the balance of forces in Spain’s fragmented parliament. It comes only days after Otegi’s party helped Spain’s minority left-wing government approve the Spanish budget on its first reading. Unsurprisingly, then, the political right – apoplectic about what it considers a “social-communist” regime (due to the presence of Podemos and United Left ministers in the coalition) – resoundingly welcomed the court’s decision. The centre-right parties the Popular Party and Citizens reacted with joy, calling for the “full weight of justice” to fall on Arnaldo Otegi and his co-accused, as if they had not served unjust prison terms already.

The extreme right-wing party Vox also celebrated the decision, describing it as a “triumph of justice”, and repeated their demand that EH Bildu be outlawed. Vox considers both the left and independence movements to be threats to the integrity of the Spanish State – the Secretary-General of Vox even acted as a private prosecutor in the Catalan leaders’ trial. This is a view shared by some elements of the Spanish state, and many of these same forces, who yearn for the “order” of the Franco dictatorship, have been at the forefront of the persecution of both the Basque and Catalan independence movements.

The rapid growth of Vox, and its broadening support in organs of the Spanish state – the police and army in particular – is increasingly disturbing. Recent disclosures about Francoist and anti-democratic forces in the Spanish military suggest that ongoing connections exist between the party and elements of Spain’s armed forces, but the details remain – for now – unclear.

Nonetheless, the political-judicial absurdity decreed by the Spanish Supreme Court on Monday should act as a reminder – like the verdicts against the Catalan pro-independence leaders for organising a peaceful referendum, and the police violence on referendum day – that powerful forces in the Spanish state are not interested in democracy. The Spanish state has repeatedly instigated and sought out violence across the Spanish state to conceal its undemocratic nature and to maintain the status quo.

Until Spain’s post-Francoist institutions – still teeming with those who would happily wind back the clock on democracy – are truly reformed, and the right to self-determination is genuinely respected, Spain will remain a failed state, where talk of “democracy” and the “rule of law” should only be used in an aspirational sense. For those living in the shadow of Madrid, the hypocrisy of a European Union critical of Poland and Hungary, but silent on Spain, is daily testimony to the failure of Europe to defend fundamental rights from abuses occurring right under its nose.

Michael Roberts getting us off to a rambunctious start to the week with an analysis of where things are going economically. Michael Roberts is an Economist in the City of London and prolific blogger Cross-posted […]

After the people of Ukraine and Russia, the other losers of the Ukrainian war will be Europe. Michael Hudson is the author of Killing the Host (published in e-format by CounterPunch Books and in print by Islet). His […]

Richard Murphy – Thoughts on the IMF and World Bank

Murphy believes there could well have been a sea change at the IMF and World Bank. It is however one thing to produce analyses and papers making the right noises, and the IMF arguing that […]