The idea that fair trade labels will change the world economy is questionable. Often the main beneficiaries are not farmers in the Global South but Western consumers willing to pay for the gratification of ethical consumption. The fair trade movement started out with much greater ambitions to turn everyday exchanges into opportunities for political education and international solidarity. Ellen Mangnus traces the history of fair trade in the Netherlands to ask what it means today.

Ellen Mangnus is a sociology lecturer at Wageningen University and an expert in International Development having studied the development economics of West African countries. Previously, she worked at the Royal Tropical Institute. 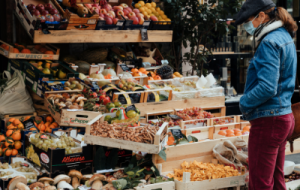 “No to Beet Sugar, Buy Cane Sugar, Aid and Trade”. This was the slogan on the banners being carried in The Hague towards the Binnenhof, the heart of the Dutch government. Photos of the demonstrations show men and women in thick coats. The sky was cloudy and it was freezing cold, but the activists were beaming with excitement.

On that day, 3 December 1968, they offered Prime Minister Joop den Uyl a heart made of cane sugar. It was the first step. The eyes of my good friend Hans Beerends sparkle when he tells the history of the Dutch “wereldwinkels” (fair trade shops). He shows me photos from his album. None of the activists had ever been outside Europe; the images of distant places and small sugar cane farmers reached them only in black and white. But they had all known hunger.

In the winter of 1944, in the hope of filling their screaming stomachs, many Dutch people had broke their fingernails digging in frozen garden soil in search of tubers and bulbs. In that year of famine they no longer dreamt about the future; their imagination extended no further than images of plates of meatballs with gravy. Once a month, they ate potatoes with peels donated by the HOKAM foundation (Help Our Children Get Meals).

They thus learned from an early age that hunger can drive people to folly, and that an empty stomach makes one susceptible to a sandwich filled with evil. At the end of the hunger year, they also learned that hunger was manmade: the liberation document had only just been signed when bags of pea flour and tins of cookies started falling from the sky. A gift from the liberators. Within a week, everyone in Holland had proper food again. It suddenly became clear to the activists – who were children at the time – that hunger was a war strategy, and that humans created hunger to eliminate their enemies, to assert their power.

The Dutch activist Piet Reckman unmasked the mystery. He described in his book Riet, het verhaal van de suiker (Cane, the Story of Sugar) how thousands of South American farmers were starving because Europe refused to take their cane sugar. European countries levied import tariffs and provided plentiful subsidies to their farmers who grew sugar beets; Brazilian farmers could never compete with that. The poverty of farmers worldwide was a result of a deliberate attempt by the West to boycott cheap products from what was then called the Third World to support its own industry and agriculture.

Reckman took action: he began to sell cane sugar. People who were against this exploitation bought cane sugar rather than beet sugar. Sugar thus became a means for political struggle.

Soon it became about more than sugar: import tariffs were also levied on coffee, tea, cocoa and tobacco. The activists set up shops where they sold these products with a premium added. They offered their goods to ordinary citizens in squats, attic rooms and town halls. But the shops were more than simply points of sale: they were activist salons for gathering, devising political actions, and recruiting new fighters.

What they sold was not just a fair product, but a manifesto. The packet of sugar or coffee was the opening; what followed was a comprehensive story about discriminatory import barriers and agricultural subsidies. Customers did not leave the store without being informed about the logging of tropical forests by large soy exporters and the displacement of people and animals for the construction of banana plantations. They would never again be able to stir beet sugar into their tea without thinking about the suffering it represented elsewhere.

In short, consumption was used to remind the unsuspecting citizen that hunger was a consequence of political choices. The goal of the activists was to create support for the abolition of tariff barriers and to make consumers part of the struggle for a fair trading system. The extra money paid for solidarity products was not intended for the farmers; it was donated to activist groups fighting for political justice on the ground. The activists maintained close ties with the People’s Movement for the Liberation of Angola, student movements in Brazil, and the Revolutionary Left Movement in Chile.

But a turning point occurred somewhere in the 1980s. Not in the situation of those farmers; they were still being exploited. Nor in the unequal trade relations; the West steadily continued to build up its tariff barriers. No, it had to do with the consumers; they no longer had time for the long stories of the fair trade salespeople. Moreover, they wanted the guilders they spent to have a direct impact on the lives of the farmers. Where did this come from? Did consumers no longer believe in the power of the liberation movements? Or had they lost hope that a fair trading system would arise through politics? The French philosopher Jean-François Lyotard identified it as the end of “grand narratives”. Instead of one overarching guiding story, Lyotard saw a mosaic of micro-stories, small visions about human existence. People no longer believed in progress through class struggle. Welfare states were rapidly being dismantled, placing mountains of responsibility on everyone’s plate. Citizens resorted to changes that were within their power.

In 1988, the Max Havelaar quality label was launched. This label allowed coffee to be characterised as “fair” and made it possible for supermarkets to buy fair trade coffee. This fair coffee reached a wide audience; this was the first step in the transformation of the wereldwinkel fair trade shops. In the following years, Hans Beerends saw with regret how the policy changed from “sales as a means” to “maximum sales as a goal”. Activism became part of the system it once fought against. Fair trade was reduced to a better price, and the story of unfair trade relations was simplified to the anecdotes that customers wanted to hear: about how the fair trade products sold helped the farmer to set up a business or pay for his children’s schooling. Foreign farmers and craftsmen were again at the service of the western consumer.

The Slovenian philosopher Slavoj Žižek calls it cultural capitalism: the blending of doing good and capitalism. Charity is no longer simply putting money to good causes; today, doing good can be done while consuming. We buy shoes from a brand that donates a second pair to a child who has no shoes, and we drink coffee that also earns money for the farmer. This is hopeless, Žižek argues: nothing will change if the roots of this thoroughly rotten system are not removed. According to Žižek, the consumer benefits by feeling good through the illusion of contributing to a better world. However, he says, the opposite of a better world is the result, as the exploitative capitalist system is only perpetuated. This can be compared to the slave owners who took good care of their slaves instead of granting them rights. In this way, the slaveholders mainly prevented oppressed slaves from realising the injustice of their situations. For real progress, Žižek says, we must restructure society in such a way that political choices do not lead to hunger and poverty. Although he gives us little guidance on how to do that, he is certain that “fair consumption” will only get in the way.

“Fair Trade became Feel Good”. I copied this powerful title from an essay by former minister Jan Pronk in which he outlines what he thinks fair trade really means. “Trade is not only about what we import, but also about what we export”, he wrote. Fair trade calls for an end to arms exports to developing countries, to the global shipment of contaminated waste and the dumping of European agricultural products on African markets. Perhaps fair trade more often calls for “not consuming” rather than for sustainable consumption. According to Pronk, fair trade also means saying “no” to everything in conflict with it. For example, countering fishing by high-tech Western ships that displace local fishing along the coast of Africa, reducing greenhouse gas emissions that affect living systems in other countries, or fighting against the importation of blood diamonds and coltan from mines where slave labour takes place. For the Netherlands, fair trade therefore also means no longer acting as a tax haven. But more importantly: fair trade is about power relations. It is about intellectual property, and access to land, water, energy and natural resources.

As they knew in the “wereldwinkels”, fair trade is a long story. Fair trade requires political struggle.

This article was first published in Dutch by De Helling.

Every Christmas all our thoughts are with the political prisoners throughout the world. Toni Strubell  is a former MP in the Catalan Parliament, journalist, and author of What Catalans Want Carme and Dolors are the […]

The Catalan crisis has brought to light the problems Spain has had with democracy since the Franco era. What we are discovering is not pretty – and has little to do with the democratic pretensions […]