Despite calls to phase out gas boilers by 2025 to achieve EU climate neutrality goals, EU governments continue to pour public money into fossil fuel heating. A new analysis shows that 16 out of 27 member states are still subsidizing different types of dirty heating, which is hampering the deployment of clean heating technologies.

The EEB is the largest network of environmental citizens’ organisations in Europe. It currently consists of over 170 member organisations in more than 35 countries (all EU Member States plus some accession and neighbouring countries), including a growing number of European networks, and representing some 30 million individual members and supporters.

Time is running out for the European Union to decarbonise the heating sector, which is the easiest and the most urgent to decarbonise as it is responsible for half of the EU’s annual energy consumption and a third of its CO2 emissions.

Technology to carry out this transition has not only been there for years but also the market is ready and the industry is calling to switch from gas boilers to clean technologies.

Nevertheless, EU member states are not doing their part to boost this transition towards clean heating.

This year, only 7 countries, Croatia, Estonia, Ireland, Lithuania, Luxembourg, Malta and the Netherlands, have cut off public funding to gas, coal and oil heating, as the latest analysis by the European Environmental Bureau (EEB) on behalf of Coolproducts campaign shows.

Findings reveal that 16 EU governments still incentivise the purchase and/or installation of new gas boilers through various tax reductions, loans and grants, which range between €200 and €2,500 and are supposedly aimed at greening our homes. Moreover, 9 are still promoting oil heating and there are still 2 of them where coal heating can still be subsidised. 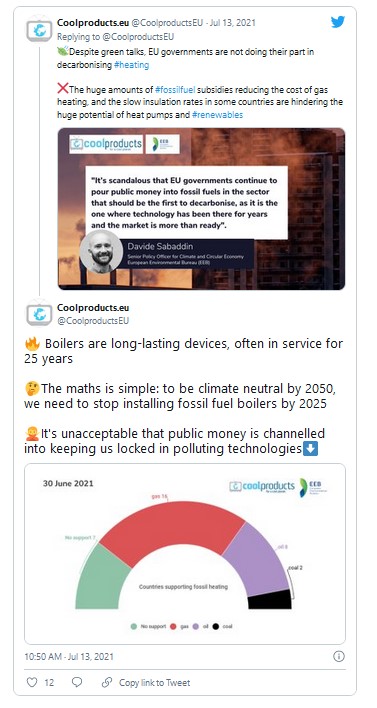 A month ago, the International Energy Agency endorsed one of the main claims of Coolproducts: we will not reach climate neutrality by 2050 if we do not ban fossil fuel boilers by 2025. The European Parliament just voted for pushing EU member states to end fossil fuel subsidies by 2025.

A recent report of ECOS for the coolproducts campaign showed fossil heating technologies face bans only in a few member states and concludes that this process can only gain momentum if the European institutions speed up the decarbonisation process.

Even major EU energy groups recently called on the European Union to favour decarbonisation through electrification of heating over fossil fuel solutions, arguing that heat pumps can be deployed on a large scale in Europe without jeopardising electric grid stability, a false argument that the gas lobby has been spreading.

Despite these winds of change over the sector, boosted by the launch of the ‘Fit for 55’ package, EU governments are not doing their part in the decarbonisation of heating. The slow uptake of clean heating at national level, namely the huge amounts of fossil fuel subsidies reducing the cost of gas heating, and the slow insulation rates in some countries are hindering the huge potential of renewables.

In the report, experts have compared families that have one average wage for a full-time employee of each country and the affordability, if the family pays 5% of the income for the investment. Findings are very illustrative:

Most EU countries support in one way or another the installation of renewable energy for heating in the form of heat pumps and solar heating, but the study reveals that no member state managed to even the payback time of the technology purchase of gas boilers and heat pumps. Some schemes are only open for a short time and have quite limited budgets.

It took us a long while to find an adequate article concerning the outrage that occurred yesterday in London. This piece by Jonathan Cook brought the most important strands together. Thus we selected this article […]

Julia Steinberger – The kids are not OK

Very recently, IPCC lead author Prof Julia Steinberger went to give a climate talk at her old high school in Geneva, and—in her own words—was given a masterclass in our failings Julia Steinberger is Professor […]