Things are looking down for the crypto lemmings. 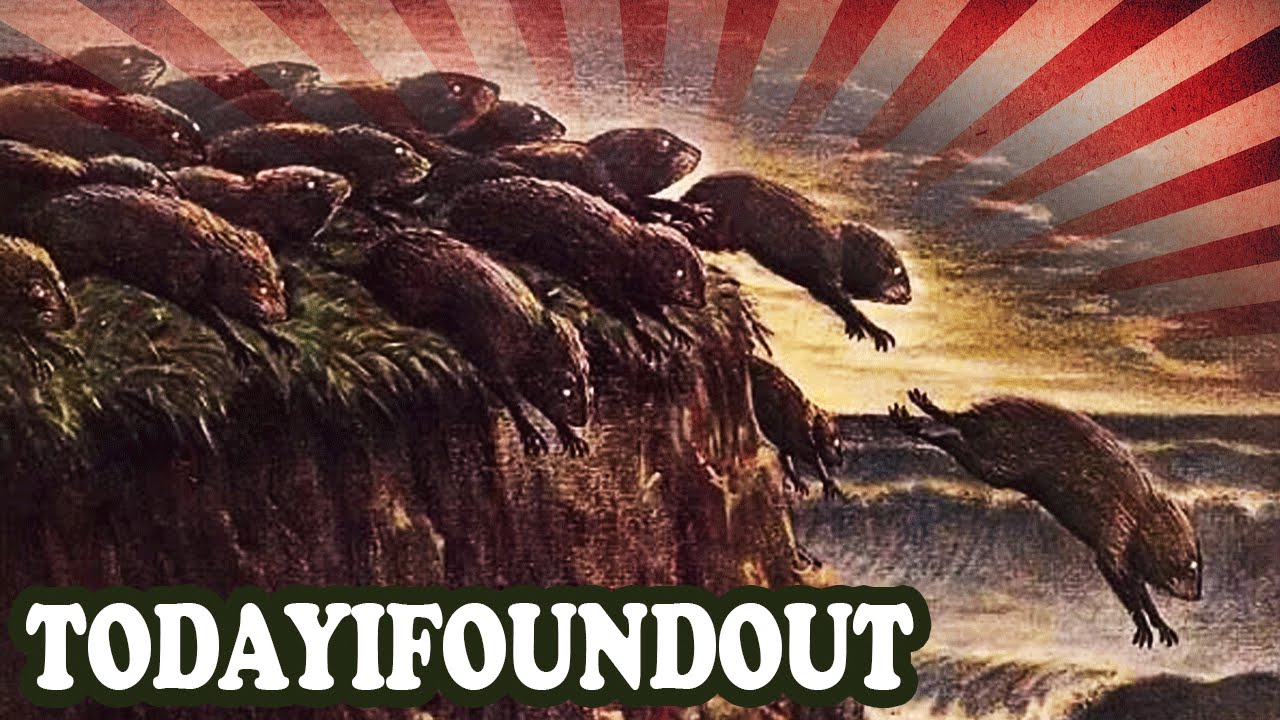 The crypto lender Celsius has filed for Chapter 11 bankruptcy. This should come as a surprise to absolutely no-one, though the grief and pain on Twitter and Reddit suggests that quite a few “Celsians” didn’t want to believe what was staring them in the face. Celsius suspended withdrawals nearly a month ago. So far, every crypto lender that has suspended withdrawals has turned out to be insolvent. There was no reason to suppose that Celsius would be different.

Celsius’s bankruptcy filing says the company has assets of $1 – 10 bn and a similar quantity of liabilities:

This doesn’t tell us much about the extent of the company’s insolvency. But rumours have been circulating of a $2bn hole in its balance sheet. In May, according to Coindesk, the company said it had $12bn of what Celsius calls “customer assets” and Coindesk calls “assets under management”, and $8bn lent out to clients. So “assets under management” seem to have fallen by $2bn. Could this be the missing $2bn?

No, it couldn’t. It’s the wrong side of the balance sheet. What Celsius calls “customer assets” are its own liabilities. And here I must take issue with the wholly wrong and downright misleading terminology used both by Celsius itself and by journalists, including Financial Times journalists who really should know better.

Celsius is not an asset manager, it’s a shadow bank. And deposits in banks aren’t even “customer assets”, let alone “assets under management”. They are unsecured loans to the bank. They are thus liabilities of the bank and fully at risk in bankruptcy.

Depositors in a bank do not have any legal right to return of their funds. Even if the terms of the account say funds can be withdrawn whenever the customer chooses, the bank can refuse to allow customers to withdraw their funds if it doesn’t have the cash to pay them. Closing the doors is the traditional way of stopping a bank run. Celsius, like other crypto lenders that have suffered bank runs since Three Arrows Capital collapsed, closed its doors to stop customers withdrawing their funds. If it hadn’t, it would have run out of money.

Furthermore, if the bank goes bankrupt depositors are only entitled to a share of the residual assets after all secured and senior claims (such as unpaid taxes and loans from central banks) have been met. This is why licensed banks have deposit insurance. And this is also why, in 2008, government chose to recapitalize banks, including unlicensed shadow banks. If they hadn’t, millions of depositors would have lost some or all of their money.

Celsius’s terms of use make it completely clear that customers who deposit funds in Celsius’s interest-bearing accounts are lending their funds to Celsius to do with as it pleases. And it specifically says that in the event of bankruptcy, customers might not get all – or indeed any – of their money back. 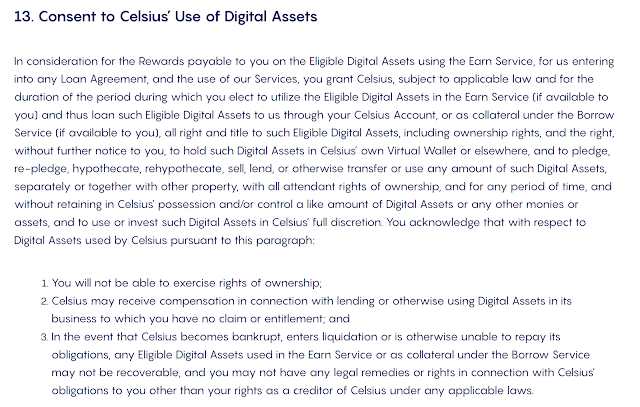 You’d think that in the crypto Wild West of all places, where “caveat emptor” rules and fools deserve to lose their shirts, people would read the small print, wouldn’t you?

Not only are customer deposits fully at risk in bankruptcy, collateral pledged against borrowing from Celsius is too. The above excerpt from Celsius’s terms of use says that title to the collateral passes to Celsius. So you haven’t pledged collateral to Celsius, you’ve sold it a bunch of crypto. Celsius is fully entitled to lend out the crypto you have sold to it. If it does, and it is unable to recover it, then you won’t be able to repurchase your crypto. Anecdotally, I have heard of several instances of people being unable to recover their crypto even when they have repaid the loan. But again, they should have read the small print. They no more have the right to return of their collateral than depositors do to return of their funds.

The only users of the Celsius platform who – in theory – have the right to return of their money are holders of “custody accounts”. Celsius introduced these in April 2022 because several U.S. states had hit it with cease & desist orders for marketing unregistered securities. These custody accounts are only available to U.S. residents. All other deposits automatically go into interest-bearing accounts.

The terms of use reassuringly say that title to funds in custody accounts remains with the customer. But that doesn’t mean your funds are safe, nor that you will necessarily be able to withdraw them. Celsius controls the keys for these accounts, and it can suspend withdrawals from these accounts. Furthermore, funds in these accounts are not bankruptcy remote:

This could be called “Custody In Name Only”. Custody accounts are merely a legal device to avoid Celsius having to register its products as securities. Unlike Voyager, Celsius seems to have made no attempt to segregate these funds or give holders of these accounts seniority over other unsecured creditors. And it explicitly says it is not a fiduciary:

I wouldn’t like to assume that people with funds in these “Custody In Name Only” accounts will get their money back.

Celsius’s insolvency is almost certainly a problem of high indebtedness and falling asset prices. When asset prices fall rapidly, as they have been doing in the crypto world recently, a highly leveraged bank’s asset value can quickly fall below the value of its liabilities. The $2bn “hole” is Celsius’s negative equity.

Furthermore, lending in the crypto world relies on overcollateralization. Lenders demand collateral top-ups (margin calls) to maintain collateral ratios, and will foreclose loans and liquidate collateral if collateralization ratios fall too low. In DeFi, this process is often automated.

Celsius has also paid off loans from DeFi lenders, probably to prevent its collateral being liquidated. And I’m sorry, Celsians, but Celsius almost certainly used your deposits to repay these debts. After all, it’s not your money. It belongs to Celsius. You agreed that it did. Why wouldn’t it use its own money to repay its debts?

It will be some time before we know how much, if any, money there will be to distribute to depositors.  There are no current accounts for Celsius – the most recent accounts filed date from February 2020 – and Celsius appears to have removed from its website anything that might indicate its current financial position. It is astonishingly opaque, far more so than any bank, or indeed any publicly traded financial institution. You’d think, wouldn’t you, that people in the crypto Wild West would want more transparency from crypto companies, not less?

Celsius marketed itself as “safer than banks”. But in reality, it was the opposite. It didn’t have deposit insurance, didn’t have any of the capital or liquidity buffers that banks are required to hold, had little or no cash reserves backing its deposits, made highly risky loans, participated in complex and opaque invesetment schemes, and lent out collateral pledged against borrowing. It behaved like the worst of the shadow banks that brought the financial system to its knees in 2008. Why, I want to know, is the crypto world hell-bent on re-enacting historical financial disasters in a new and even more dangerous form?

Inevitably, there are calls for tougher regulation of crypto shadow banks like Celsius. To some extent, I agree. At the very least, misleading marketing should be stamped on: no way was Celsius ever a safer alternative to a traditional bank. And crypto lenders should be held to the same standards of disclosure as other financial institutions. It should not be possible for a crypto lender to produce no accounts for over two years and scrub all mention of its current financial position from its website.

But there were warning signs all over Celsius. The risk to depositors and borrowers was clear from the terms of use documentation. And many people (including me) pointed out the ponzi-like nature of its business model. I am sad for those people who foolishly put their life savings into Celsius and other failed lenders. And if there has been actual fraud, then those responsible should be brought to justice. But people who don’t read the small print or take any notice of red flags really shouldn’t be surprised if they are swept away in the tide of bankruptcy.

Everyone or No One

Every year when we begin our fundraising campaign someone asks why we invest so much time and work when we could simply introduce a paywall on BRAVE NEW EUROPE. The answer is simple. We believe […]

Thomas Palley – Flirting with Armageddon: the US and Ukraine

With the tsunami of mainstream media war propaganda we have been cut off from political reality, Thomas Palley is an American economist who has served as the chief economist for the United States-China Economic and […]

Jonathan Cook: Why the western media is afraid of Julian Assange

Jonathan Cook’s speech from an event in London on the media and democracy. Cross-posted from Jonathan Cook’s Substack During an interview back in 2011, Julian Assange made an acute observation about the role of what […]