In one of the most novel presentations we have ever posted, Frances Coppola explains the current and future role of central banks in the current economic crisis. 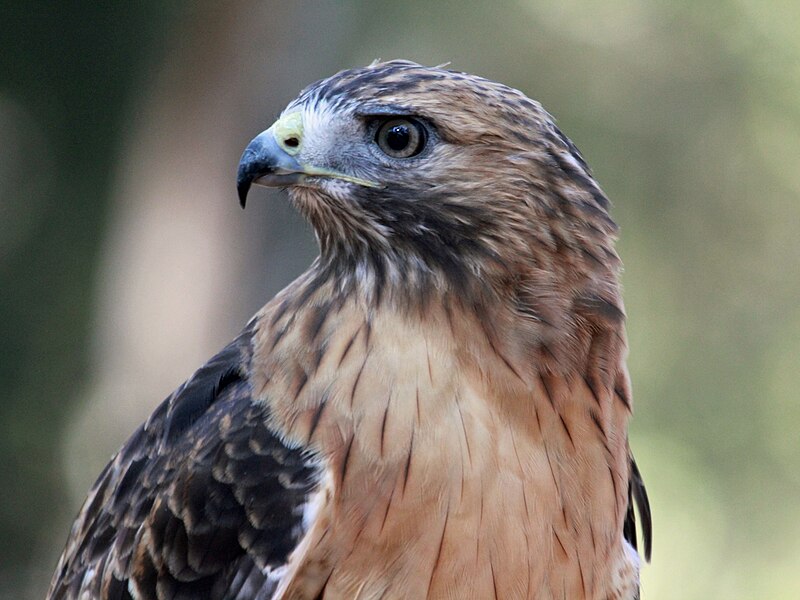 Below are the slides from my presentation at Beyond Covid on 12th June. The whole webinar can ve viewed here.
The pandemic seems to me to resemble the “nuclear disaster” scenarios of my youth: hide in the bunker, then creep out when the immediate danger is over, only to find a world that is still dangerous and has fundamentally changed in unforeseeable ways.
Rabbits hiding from a hawk is perhaps a kinder image, though hawks don’t usually leave devastation in their wake. And I like rabbits. So this presentation is illustrated with rabbits, not nuclear bombs. 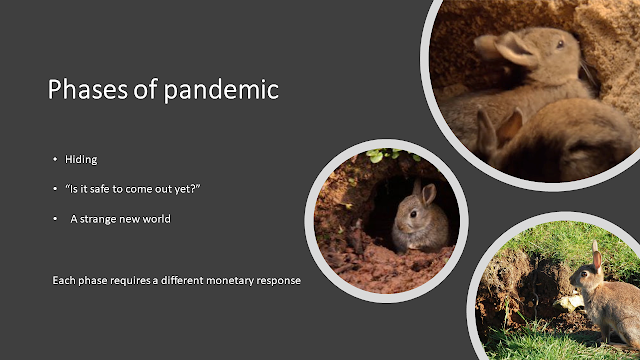 This is where we were in March/April/May. Hiding in our homes, waiting for the danger to pass: 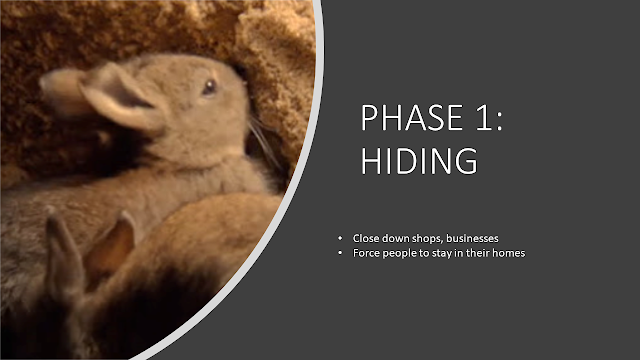 And this is what central banks should have been doing then: 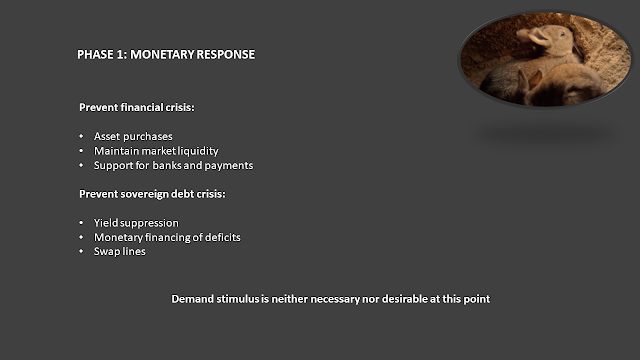 To their credit, this is exactly what they did. By supporting sovereign finances and warding off a financial crisis, they enabled fiscal authorities to take the extraordinary measures needed to keep people and businesses alive in their burrows.

Some economists mistakenly called for central banks to do demand stimulus such as helicopter money. But it was completely the wrong time for this. Why dangle carrots in front of the burrows to entice the bunnies out while the hawk is still flying overhead? Fortunately, central banks ignored them.

This is where we are now: 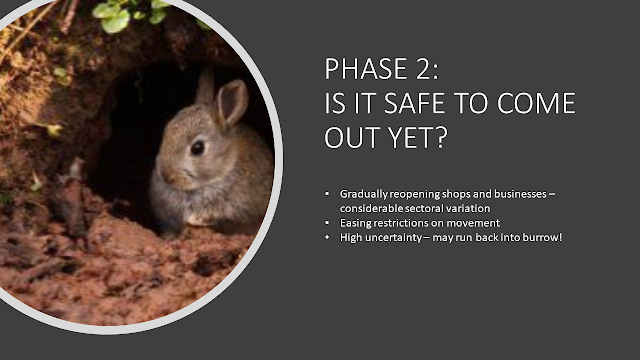 Even if all restrictions were lifted tomorrow, demand recovery would be slow because people have suffered a severe knock to their confidence. Indeed, suddenly lifting all restrictions could send the bunnies scurrying back into their burrows. The world has become a dangerous place.
So what should central banks be doing right now? More of the same, really: 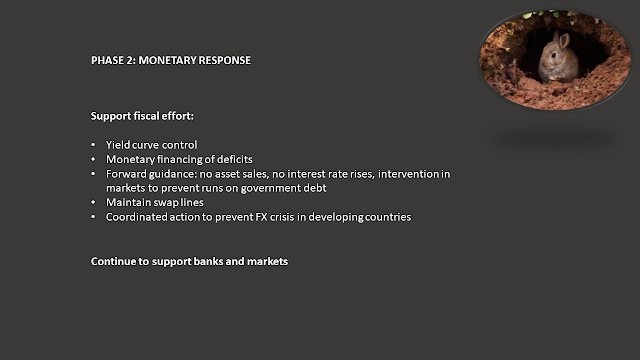 While restrictions remain in place and confidence is severely dented, it is too early for major stimulus of household demand. However, central banks could at this point do limited stimulus aimed at businesses rather than households, such as conventional QE and encouraging bank lending to SMEs.
What does the future look like? Well, it won’t be the same as before: 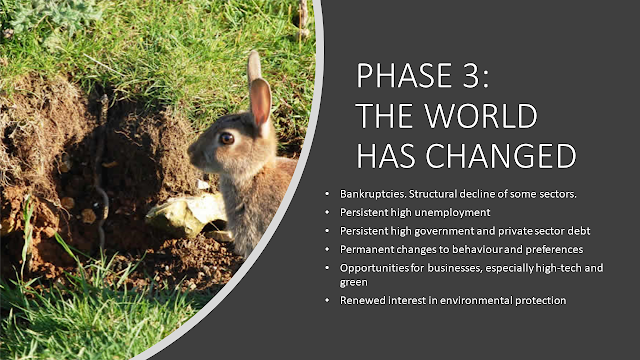 The economy will need a lot of support for a long period of time. How can central banks help to provide this support? 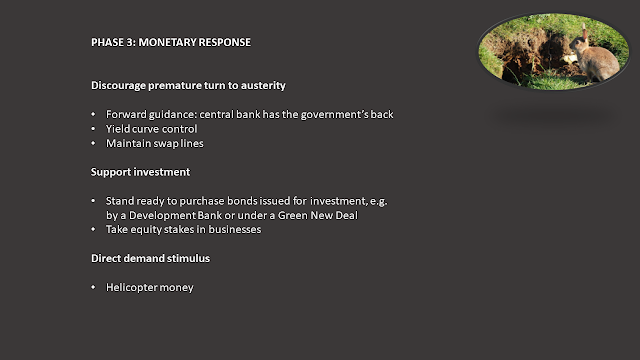 The implication of all this is that central banks need to rethink their mandates and their relationship with fiscal authorities: 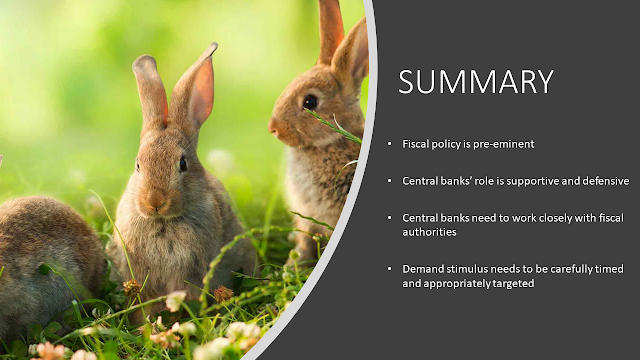 The era of dominant central banks is over. Central banks’ primary role is to support governments so that they can do “whatever it takes” to maintain jobs, incomes and prosperity.
The responsibility of the major central banks, especially the Fed, extends to the governments of developing nations. FX crises in developing countries have a habit of coming back to bite advanced nations. And the humanitarian cost of failing to support countries with high FX debt through these exceptional times is far too high to bear.

Branko Milanović – Deaths vs. the economy: an unexpected reversal

The pandemic has thrown up so many important questions. Here’s another. Branko Milanović is an economist specialised in development and inequality. His newest  book is “Capitalism, Alone: The Future of the System That Rules the […]

Politics is no longer a question of values, but of opportunism. Matteo Salvini is not the exception, but as we saw with today’s election of Urusla von der Leyen as President of the EU Commission, […]

Mathew D. Rose – The Ugly Germans Are Back

Driven by self interest German business interests and government have propelled Europe towards a political and economic abyss – still again Mathew D. Rose is an Investigative Journalist specialised in Organised Political Crime in Germany […]