The surprisingly low unemployment rate in the deep recession of 1945-6 in the US is explained by millions of women leaving the workforce to make way for men returning from the war.

This image is available from the United States Library of Congress‘s Prints and Photographs division
under the digital ID cph.3b43496

In the U.S., we are told, the post-World War II period was a golden age of full employment. High wartime government spending had brought to an end the double-digit unemployment and misery of the Depression, and as war gave way to peace, unemployment settled at a non-inflationary level of 3-5%. It’s known as the post-war “economic miracle”.

But it’s a myth. There was never full employment. The low unemployment of the post-war years is a massive statistical fudge. In fact, over five million people lost their jobs immediately after the end of the war, most of whom never worked again. But they were never listed as unemployed – because they were women.

The Great Unemployment Fudge started in the “Depression of 1946”, described by the Cato Institute as “one of the most widely predicted events that never happened in American history”. During the war, there was full employment, GDP was roaring and industrial production was at an all-time high. But much of this was devoted to the war effort. Alvin Hansen was one of many economists warning that sudden cessation of wartime production and employment would plunge the economy back into Depression: “The government cannot just disband the Army, close down munitions factories, stop building ships, and remove all economic controls,” he said. Unemployment forecasts for demobilization ranged from 8 million to 20 million.

Understandably, policymakers were very worried. And with reason. Hansen’s warning proved prophetic: as the war came to an end, the economy fell into a deep recession. The fall in real GDP in 1945-46 dwarfs both the Great Recession and the Covid-19 recession. Only the Great Depression was worse: 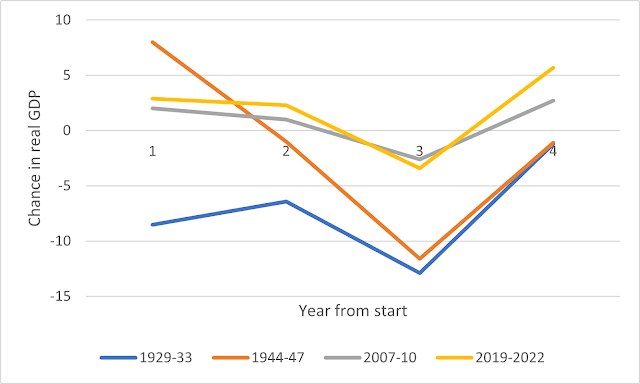 BLS figures show that the fall in real GDP was mainly caused by deep cuts to government spending: in 1946, government spending fell by nearly 65%, and by 1948 the government was running a budget surplus.  But private sector consumption and investment increased. There was quite a boom in residential construction. As has happened so often in U.S. history, the housing market pulled the economy out of recession. 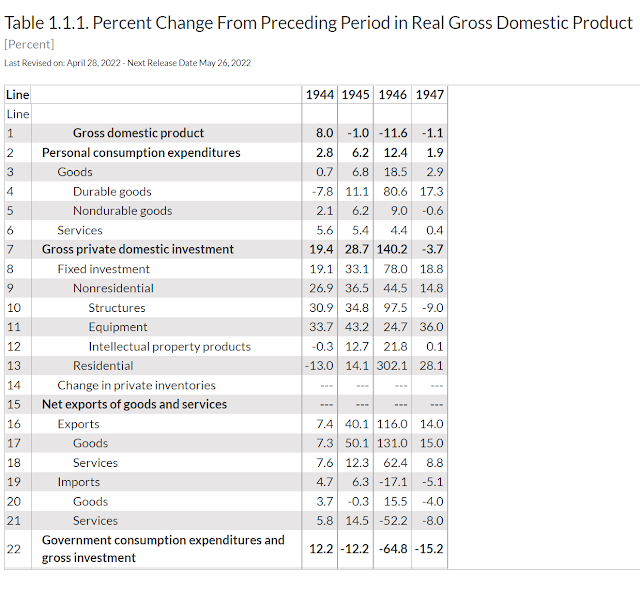 For the Cato Institute, the remarkable rebound in GDP and surprisingly low unemployment proved that worries about government spending cuts re-starting the Depression were unfounded. Blithely assuming away the counterfactual, they claimed that cutting government spending had kickstarted private sector investment and created 4 million new jobs. Unemployment was higher than it had been during the war, of course, but that’s because mobilization had artificially depressed unemployment. After demobilization, unemployment rebounded to an average of around 4%: 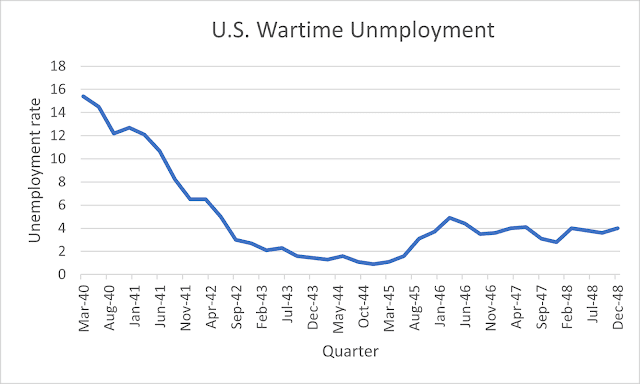 It averaged about 4% for the next twenty years.

But it is extremely odd for unemployment to be so low in a recession of such severity. The Great Recession was in real GDP terms much less severe than the 1945-6 recession, yet unemployment rose to 10%. I wondered if something was artificially depressing the reported unemployment figures for 1945-6. So I went on a hunt.

I didn’t have far to look. This table from a a research paper by the Cato Institute economists Vedder & Galloway – the same people who claimed that the “Depression of 1946” never happened – shows that the increase in joblessness immediately after the war was far higher than the reported unemployment figures. I’ve highlighted the relevant figures. 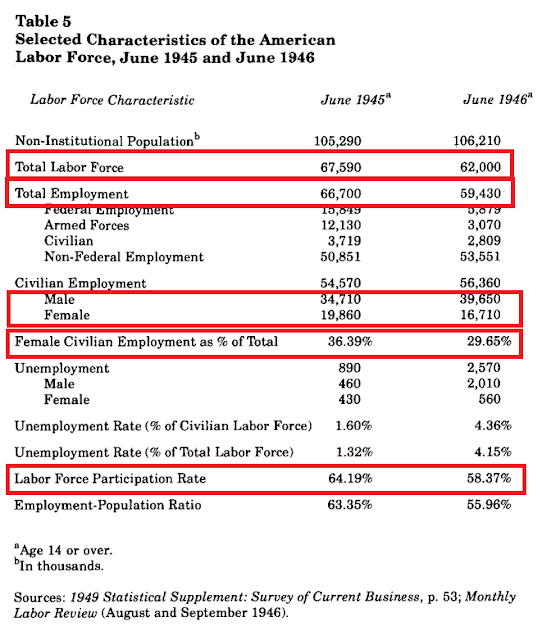 It is also evident that despite Cato Institute’s gleeful claim that 4 million new jobs were created, job losses during this period were far higher. Total employment fell by 7.27 million. But only 2.5 million people are recorded as unemployed. So nearly 5 million jobless people were not recorded in unemployment figures.
The detailed figures in this table show us that between 1945 and 1946, nearly three million female civilian employees lost their jobs. As their jobs disappeared, civilian employment among men sharply increased: 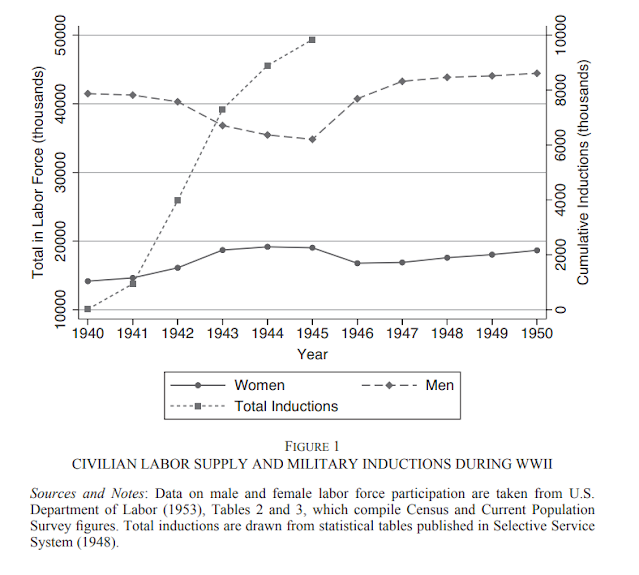 As a result, the labour force participation rate – the proportion of the adult population that is either working or looking for work – fell to less than 60%, a drop of nearly 6% in one year. It did not regain its wartime level until 1981.

So the surprisingly low unemployment rate in the deep recession of 1945-6 is explained by millions of women leaving the workforce to make way for men returning from the war.
Did the women want to leave their jobs? Vedder and Galloway say they did:
In particular, millions of women voluntarily decided to withdraw from the labor force and reverted to their traditional roles as mothers, wives, and housekeepers.
This is the heart of the Great Unemployment Fudge. People who voluntarily withdraw from the labour force aren’t unemployed. So if women who left their jobs in 1945-6 were simply reverting to being mothers, wives and  (unpaid) housekeepers, they did not need to be included in unemployment statistics. Hey presto, we have an explanation for the remarkably low unemployment in the 1945-6 recession. The GDP fall in 1945-6 was merely the economy readjusting itself to peacetime activity. The “Depression of 1946” really didn’t happen.
But Rose found that far from voluntarily leaving the workforce, women were systematically pushed out to make way for men:

Faced with discrimination, harsh pay cuts, and unfair job downgrades, many women did indeed opt to leave the workforce. But it is hard to see how dropping out of a labour market that did not want them and was determined to push them out is in any way “voluntary”.

To modern eyes, deliberately pushing women out of the workforce to make way for men appears appalling. But in its time, it was sensible. No-one wanted a return of the unemployment and poverty of the Great Depression. And there were an awful lot of veterans needing jobs. If women had stayed in the workforce, they would have competed directly with those veterans for jobs. At the time, unemployment was considered to be a much bigger problem for man than for a woman, because she was considered only to be working for herself while he was keeping his entire family. So reducing male unemployment had to be the priority, even if it meant large numbers of women remaining jobless for long periods of time. I have no doubt that women were put under considerable social pressure to leave their jobs and return to being housewives and mothers.

But I have much less sympathy for the blatant misrepresentation of unemployment figures and the poisonous claim that women “voluntarily” left the workforce. Had women still been counted as “available for work” in 1945-6, reported unemployment would have been in double digits – not as high as in the Great Depression at its worst, but certainly of the order of 10-12%, similar to the rates immediately prior to the war. And it would have stayed elevated for a long time. But that would have destroyed the myth of full employment, along with the notion that cutting government spending by 65% in one year can ever kickstart recovery and job creation.

So the Depression of 1946 very much did happen. And its effects were very long-lasting. It wasn’t just women who worked during the war who were excluded from the post-war workforce. Women who were children during the war were too, and so were the early “baby boomer” women. Women didn’t start to return to the workforce in significant numbers until the second half of the 1960s, and they were still being systematically discriminated against well into the 1970s.

This is by no means the only example in history of a country disguising high unemployment by encouraging some groups of people to leave the workforce. For example, in the early 1980s recession, the U.K. paid older workers, particlarly men, to retire early to make way for younger people. But in no other post-war recession to my knowledge were millions of women systematically pushed out of the workforce without compensation to provide jobs for men. Let us hope this never happens again.

Gig Economy Project – Podcast: ‘The difference between a slave and a worker’ – interview with Leïla Chaibi MEP

Capitalists in general—and U.S. capitalists in particular—calculated that profits would be greater in other investments than those that could have produced the items needed to prepare for and contain COVID-19. They also determined that the […]