German politicians and media are intensifying pressure on Rome in anticipation of today’s EU Commission verdict on Italy’s national budget. Already last week, EU Budget Commissioner Günther Oettinger announced, in reference to the Italian deficit, that the Italian government must “correct” its draft budget. Media reports refer to a “black week” for Rome. Negative reporting – like rating agencies’ devaluation of Italy’s creditworthiness – can contribute to the destabilization of Italy’s financial and credit markets. The country’s current downward spiral threatens to re-escalate the banking crisis. Whereas Berlin insists that the EU take sharp measures against deficits, Germany’s Finance Minister at the time, Wolfgang Schäuble had prevented the EU Commission from taking measures against excessive surpluses, which the commission sees as potentially just as destabilizing. Germany has been achieving these surpluses year after year. 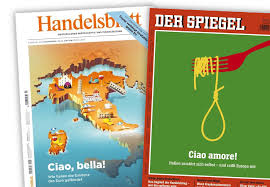 A Polish member of the European Parliament has urged the European Commission not to allow former top politicians to work for Russian energy companies, a news website has reported. Read here Another job offer at […]

This was all done during EU membership. Where was the social and labour protection so touted by the EU? Read here