It is more than tragic that the last high-ranking French Socialist is playing the role of the executioner of Italy. Fear of neo-liberalism will eventually be the death of the Social Democrat movement. 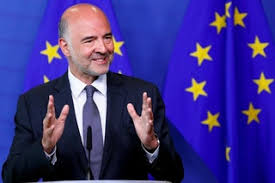 Pierre Moscovici, who, as European Commissioner for Economic and Monetary Affairs, will probably be the last French Socialist to hold high political office, has written a letter (together with the responsible Vice-President of the Commission, Valdis Dombrovskis). It is a response to the Italian finance minister concerning the Italian government’s draft budget, declaring that in the history of the Stability and Growth Pact the draft is an unprecedented deviation from the agreed cuts in government spending.

This is a very harsh judgment, which indicates that the Commission, under the leadership of a French Commissioner who belongs to a defunct party called the Parti Socialiste, wants to make an example of Italy. Since the ECB is also doing nothing to keep the “markets” in check, where Italian government bonds are being speculated on, a perfect storm is brewing against the Italian government. Without a doubt this storm has the aim of disempowering the Italian government that has just been elected, or at least intimidating it to such an extent that it adopts European “fiscal discipline”.

Who created this perfect storm?

One can be certain that the preparations for this storm were concerted, and that the German government played a decisive role. It is amazing how little the German government has said about the Italian case in the past weeks. Apart from a relatively moderate interview with the Federal Minister of Finance, the German government and the parties supporting it have hardly made any violent outbursts concerning Italy, while by contrast Germany´s “leading media” have been foaming at the mouth. This can only mean that the government and party leaders have agreed not to be seen as the ugly Germans this time, in view of the anti-German mood among the Italian population, but to leave the dirty work to European institutions.

The ECB has certainly been firmly involved in the process which – in view of the legal situation (ban on state financing), the massive political pressure, and the fact that an Italian, Mario Draghi, is its president – has no choice but to do what is expected of it, i.e. stand aside passively and let the “markets” do their work. The ECB’s critics should also note that, against German resistance and legal action, the European Court of Justice did not refer to the entire operation of quantitative easing (QE) as public financing simply because the ECB could credibly argue that this instrument should be regarded as monetary policy. QE has served to stave off deflation throughout the monetary union. Intervention in favour of a single country is exactly what is needed in view of speculation with Italian bonds, if it were not for the fact that the legal hurdles are too high.

What should Italy do?

It is difficult to predict how the Italian government will in the coming weeks after the Commission rejected the budget. In view of the many voices, including some in Italy, warning against embarking on a path that ends with Italy’s exit from the euro, the resolve of the 5 Star Movement in particular, which has hardly any independent economic expertise, could weaken. From the political point of view, however, it is certain that Italy backing down would have fatal consequences for Europe.

Italy’s ways out of the crisis are legally obstructed, blocked by other nations, or impassable for reasons for which Italy is not responsible. The path via rising export surpluses, which Italy has often successfully pursued in the past, no longer exists in the monetary union because Germany, with its outstanding competitive position acquired through years of wage dumping, is blocking any attempt in this direction. Absolute wage cuts, as was the case in Greece, would lead to the collapse of Italy´s already weak internal market and directly increase unemployment.

The possibilities of monetary policy have long been exhausted by Italy and the whole of Europe, so that no solution can be expected from companies or from the “market”. Moreover, in Italy too, companies are net savers, which mean that they actually worsen the demand situation instead of improving it. Logically, in this situation, only the state can take the step of leading the country out of years of crisis by increasing expenditure and deficits. Anyone who blocks this path politically or legally is a fool.

The end of social democracy

The fact that social democracy in Europe has for years been unable (or unwilling) to pick up on such a simple connection and use it politically shows that its days are numbered. Neither the French Socialists nor the German Social Democrats (and large sections of the other “leftists”, especially the Greens) oppose neo-liberal madness, because decades ago they missed the opportunity to put their programme on a sound economic footing. Their fear of Keynesianism with its “debts” was so great that they preferred so sell their souls to the devil, embracing the neo-liberal mainstream.

Today, when “debt” has become an existential question for nations and for Europe, this is a bitter nemesis. A party that could deal with this issue in an enlightened manner and could address a new world, in which companies save instead of investing, would initially have a huge intellectual advantage over its competitors. Since these purely logical interconnections are not a “theory”, a party (or a movement!) could easily communicate them to a sceptical population. They could make it clear to the electorate how much the citizen is being hoodwinked by the centre-right. But they apparently lack the courage and at the same time the ability to take three simple logical steps. Those who choose the path of extinction don’t deserve any better.

This is definitely not one of those brainless Orban bashing pieces. A very good analysis. Gabor Scheiring is a political economist, a Marie Curie Fellow at Bocconi University currently working as a research associate in […]

An excellent analysis of the many elements resulting in the destruction of Europe’s forests and environment. Yanis Varoufakis is a Greek economist, politician, leader of MeRA25 and DiEM25, former Greece’s Finance Minister, author and professor […]