Delivery workers for online retailer are hired as ‘independent contractors’ via a subcontractor, and are routinely earning under the legal minimum wage.

BRAVE NEW EUROPE has contributed to the strike hardship fund and we would like to encourage you to do the same. Simply click here 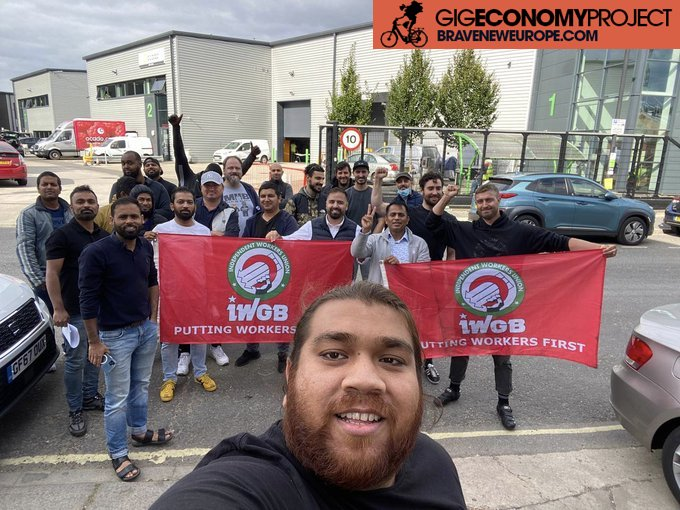 UK delivery workers at online retailer Ocado have voted for escalating action of protests and strikes, as the company refuses to engage with the union over anger about outsourcing and poverty wages.

The Ocado Zoom ‘riders’, who are represented by the IWGB union, voted by a majority to launch the campaign against the company, which had previously promised workers £14 an hour, but under a new sub-contractor, Ryde, have seen their earnings fall by 50-70%, often less than the legal minimum wage. They are hired by Ryde on an ‘independent contractor’ basis.

Business has been booming at Ocado as grocery delivery has taken off in the UK. The company saw its revenues grow by 19.8% in the first half of 2021, £1 billion up from 12 months previous. CEO Tim Steiner earned £58 million in 2019, and is expected to bag up to £100 million in bonuses over the next five years if the share price continues to rise. A report in December last year found Ocado has the largest pay gap between CEO and staff in the UK.

The company initially responded to the outcry by stating that the dispute had nothing to do with them, as the workers are hired by Ryde, not Ocado. However, under pressure, they then announced in a blog post that they planned to end the use of third-party courier companies, but this post has subsequently been deleted.

Now, the company is advertising for new couriers through its recruitment agency partner, Job & Talent, which states: “As we continue to increase the amount of deliveries we make in-house we will start to reduce the amount of orders we send to our existing third party courier companies. We will stop using these services entirely in October.”

This suggests that Ocado is planning to hire workers in-house, but the IWGB has concerns over what this is going to look like for the existing workforce, since no information has been forthcoming. The union is also aware of Ocado workers who have been employed through the Job & Talent agency for six months and still not been moved in-house.

Post-pandemic, it has become common for companies looking to restructure to use a ‘fire and re-hire’ approach, where workers are transferred to a new company under new conditions without the agreement of the workforce. A legal transfer of workers would have to be in accordance with government TUPE transfer regulations, which requires consultation with the workforce, but Ocado Zoom couriers have not been informed about these changes and the Job & Talent statement makes no reference to TUPE.

Commenting, Alex Marshall, IWGB President and former delivery worker, said that Ocado “is moving to switch from the notoriously exploitative gig economy model to an equally unethical outsourcing one based on zero hours contracts.”

He also questioned the legality of how the company is going about it.

“When workers are transferred between service providers, employers have a basic legal obligation to communicate clearly and formally with workers in advance,” Marshall explained. “They also have an ethical obligation to engage respectfully with workers and their union to address all their concerns. Both Ryde and Ocado are failing on both counts. So, as of now they are in breach of TUPE regulations.”

As well as concerns over pay and outsourcing, the workers are unhappy with health and safety issues, including the heavy loads they are being forced to deliver which gives them shoulder and back pain, and unfair processes for job distribution, shift allocation and terminations.

Babar, Ocado courier and IWGB member, said: “I am forced to work six or seven days a week to support my family but on less than £5 per hour I’m still struggling to pay my bills. We worked through lockdown even though I fall in a high risk category. I have colleagues who got ill, lost their loved ones.

“If our hard work is worth the nation’s applause it’s worth decent pay and fair conditions and that is all we’re asking for, for us and for our families.”

The #ShameonOcado campaign has also won support from Black Lives Matter UK, as the majority of Ocado’s workforce is BAME. Kwadwo Kyerewaa said: “BLM UK strongly supports the under-paid and exploited Ocado drivers who are overwhelmingly Black and people of colour.

“Ocado’s racial hierarchy is clear to see: at the bottom, darker skinned drivers must work 10+ hour shifts for insecure poverty pay topped up by food banks. While Ocado’s all white leadership team has individuals getting paid over £1 million a week to “stay motivated”.

“This predatory practice must end. All Ocado workers should be respected and paid above the poverty line.”

The workers have been given the support of local Labour MP Rupa Haq, who they met last week, and are set to meet Barry Gardiner MP, who is campaigning against fire and rehire tactics, at the West London Depot today. A strike hardship fund for the Ocado Zoom workers has already raised over £1,000.

David Beer – The power of our social media data

“Platform Capitalism is, of course, underpinned by the value of our data. Targeting people using their data is not the exception, it is the whole point. It is targeting that enables data to be turned […]

Agribusiness is trying to spin itself some eco-credentials, to stop governments from regulating it. Mat Hope is editor of DeSmog UK Cross-posted from Open Democracy If the current home page of pesticide giant Syngenta is […]