Flying is one of the most acute challenges of climate breakdown. How the aviation industry tries to get around this. 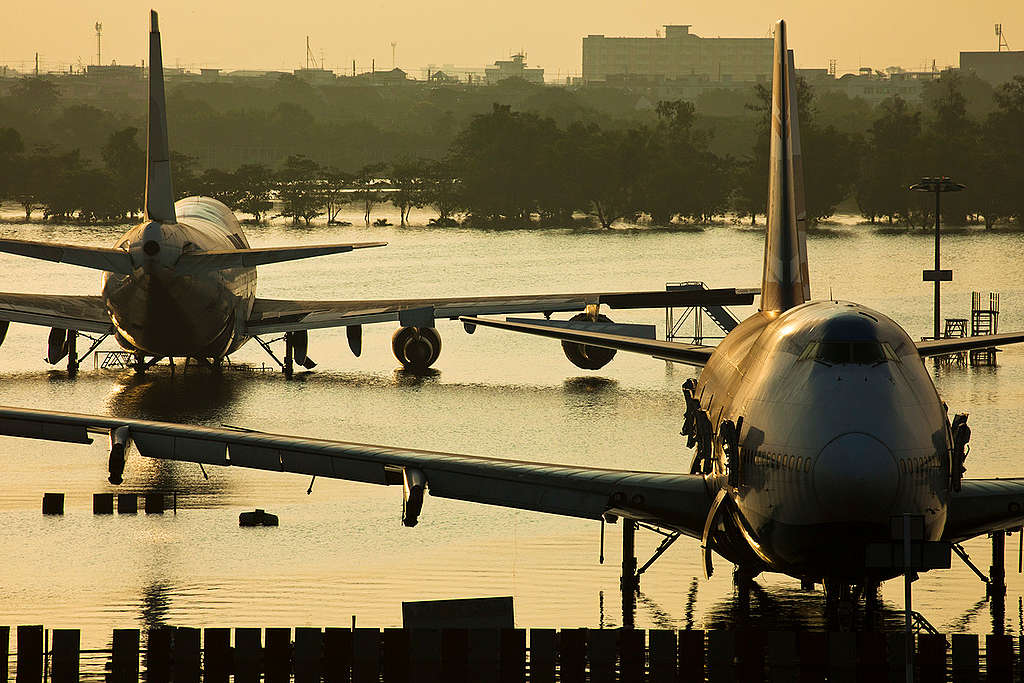 Abandoned aircraft sit on a flooded tarmac at the Don Muang domestic airport which has been closed for weeks due to the extreme flooding in the area in Bangkok (2011). © Athit Perawongmetha / Greenpeace

Airlines around the globe have been vying with each other on who has the greenest and shiniest announcements recently. British Airways made headlines with its plan to use sustainable aviation fuel on a commercial scale, Air France claimed to aim for a 12% cut in emissions by 2030, and Ryanair has called itself “Europe’s lowest emissions airline”…

And yet, in the face of the climate crisis, something in this gleaming rhetoric leaves a bitter taste. Could an industry whose global greenhouse gas emissions have been growing by 3.4% annually over the previous decade be fooling us about its efforts to become a responsible beacon of climate protection?

Bearing in mind that climate scientists have warned that the climate limit of 1.5°C is close to being broken, let’s take a closer look at the green promises and climate actions of airlines – and dissect their carbon jargon!

A new report by Greenpeace Central Eastern Europe finds that there is little to no substance to the climate claims made by some of the biggest European airline groups that they will cut greenhouse gas emissions in the future. Why? Firstly because these companies mainly rely on false solutions and tricks that create a myth that aviation is green, despite the fact that flying remains the most climate-damaging means of transportation per passenger and per kilometre. These are the industry’s five most widely used tricks and false solutions:

1. The illusion that flying is “carbon neutral” through offsetting emissions

Globally, airlines have pledged to become carbon-neutral (or “net zero”) by 2050. Doesn’t sound too bad? Think again! The term “carbon neutral” does not actually mean cutting greenhouse gas emissions at the source. Instead, it is based on the illusion that someone can release greenhouse gases, and balance them out by capturing these emissions somewhere else in the future, e.g. through carbon offsetting schemes.

Neither planting trees nor avoiding deforestation will make a flight “carbon neutral”. Research has actually shown that only 2% of offset projects have a high probability of resulting in additional emissions reduction. Nevertheless, airlines continue to push the illusion that we can fly carbon neutral or net-zero.

Climate scientists have warned that the concept of “net zero” and “carbon neutrality” is a “dangerous trap” that has “hastened the destruction of the natural world by increasing deforestation today, and greatly increases the risk of further devastation in the future”.

2. Overemphasis on “sustainable” aviation fuel as a solution

The airline industry loves bringing up the magic word “Sustainable Aviation Fuel (SAF)” which refers to a variety of relatively new types of jet fuel based on e.g. biomass or waste intended to replace fossil fuel-based kerosene. But the problem with so-called sustainable aviation fuel is: it is not sufficiently available and/or mostly not really sustainable. While airlines present SAF as a key lever to decarbonise aviation, it only represents 0.05% of the annual jet fuel needed in the EU. In 2019, SAF accounted for at most 0.1% of the total annual jet fuel consumption of airlines analysed in a new Greenpeace CEE report. It’s estimated that SAF will make up only 19% of airline fuels by 2040 – meaning that 81% will still be fossil-fuel based kerosene.

Not to mention that crop-based biofuel or so-called agrofuel which is made from food and feed crops like palm oil are often associated with deforestation and biodiversity loss.

What about renewable e-kerosene, synthetic kerosene made from electricity and a carbon source? It’s one of the few alternative fuels that can be produced in a relatively eco-friendly way if the electricity comes from 100% renewable sources. But this is a long way from being a done deal and would need significant investment, research and development.

The aviation industry and political leaders are relying on excessive optimism for false technological solutions – and it comes with a high price: researchers have warned that “technology myths” are stalling the necessary progress in climate policy for aviation. More fuel-efficient planes are not a false solution as such, but they will not be sufficient to achieve decarbonisation in time to limit global heating below 1.5°C. Under an optimistic scenario, Greenpeace expects an efficiency improvement (energy consumption per passenger-kilometre) of only 30% by 2050 – not enough on its own to limit global heating below 1.5°C.

As the world becomes increasingly invested in tackling the climate emergency, the airline industry certainly wants us to think that they are part of the solution, not the problem. We see greenwashing everywhere in the sector: from misleading communication and sponsorship of climate friendly initiatives to the promotion of solutions to tackle the environmental and social shortcomings of the industry that are either wrong, insufficient, or both. There is a big discrepancy between the actual emissions reduction plans of airlines and the promotion of “green” PR by the airlines.

5. Promotion of frequent flying as a necessity and cheap way of getting around

Advertisements by airlines pretend that there is no climate emergency and no reason to reduce the number of flights. Airline advertising overwhelmingly focuses on low-cost flights, deals and promotions while evoking access to nature through flying, as found in a new Greenpeace Netherlands report. The true cost of flying – the millions of tonnes of GHG emissions it causes – is not included in a low-cost fare. And let’s be honest: an individual airline ticket might be cheap, but this is only because airlines already benefit from taxpayers money through major tax cuts and public subsidies.

Where does this leave us?

Unfortunately for the planet and us people, airlines are currently getting away with their tricks and false solutions. Without political action to counter its growth prospects, the aviation industry could become one of the biggest emitting sectors globally.

At the same time, no other means of transport in Europe has been as heavily subsidised with public money through VAT and tax exemptions, state aid, bailouts and loans, as well as research and development support. This has distorted markets for decades to the benefit of aviation above green mobility. For example, airlines are exempt from kerosene taxes and VAT on international tickets, while railway companies pay high energy taxes and rail tolls. On top of this, European airlines still receive a large proportion of their emissions allowances – permits to pollute under the EU’s Emissions Trading System – for free. There is a serious lack of strict laws to mitigate airlines’ GHG emissions – and that’s a major problem!

What needs to happen, to bring aviation in line with the Paris Climate Goals?

Chaitanya Kumar – Use Covid Recovery to get to Net Zero: the Citizens Assembly’s Verdict

Juan Laborda – Spain: Every Credible Recovery Plan begins with ‘G’ as in Green