The  German movement “Ende Gelände” has kept up pressure on the German government, which has de facto revoked its Paris Climate Pledge, to continue burning lignite and coal until 2035. 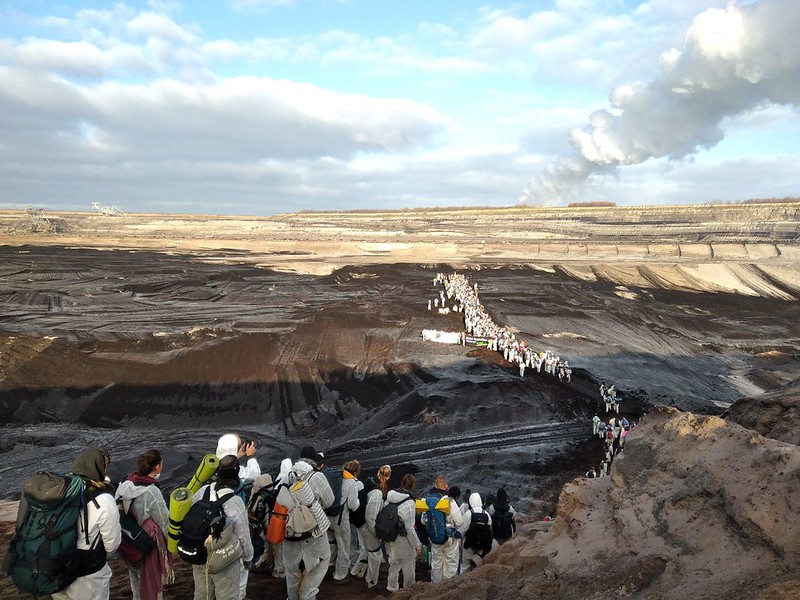 One day after the global climate strike, more than 4,000 participants from the German movement “Ende Gelände” blockaded to three lignite opencast mining regions in Eastern Germany. While the situation in the federal state of Brandenburg and around the city of Cottbus was relatively tranquil and the police were largely restrained, the police in the neighbouring federal state of Saxony, south of Leipzig, took a harder line against the protestors and numerous arrests were made.

In the run-up to the protests there had been massive agitation in the Cottbus region against the organisation “Ende Gelände”, both in the local media and in local politics. A coalition of politial parties consisting of Social Democrats, Christian Democrats, the Left (Die Linke) and the fascist AfD claimed that members of “Ende Gelände” were planning violence and destruction.

Due to the cold weather “Ende Gelände” decided to change its strategy, organising these one day blockades. In various columns, termed “fingers”, with up to 1000 activists in their visible white coveralls the 4000 participants managed to reach all planned blockade points: the coal railways and the three opencast mines.

The activities began shortly after 5 a.m., 1000 people took the train from Berlin to the Jänschwalde power station. Other fingers set off with buses from Berlin and Dresden. Around 7:00 a.m. the activists got off the train near the Jänschwalde power station and shortly after blocked the railway lines used exclusively for coal transport and occupied the opencast mine.

The Jänschwalde power plant is operated by the Czech LEAG coal group, Sweden’s Vattefall having cut and run as their power plants fell into disrepute (but not closing them down as requested by many). Together with the Boxberg and Schwarze Pumpe power plants, Jänschwalde is one of the ten dirtiest CO2 power plants in Europe. Here alone, there are 20 million tons more CO2 produced than by the whole of the German capital, the city of Berlin with its 3.7 million citizens.

In addition to the “Purple Finger”, the “Red Finger” succeeded in shutting down conveyor belts in the Jänschwalde open-cast mine. A “colourful finger” with the “Anti-Coal Kids”, who were walking with fireworks and Bengali fire on the road to the level crossing near Kopatz, blocked the coal trains for several hours almost unhindered by the police. The “Green Finger” came with 10 buses from Dresden and had meanwhile occupied the opencast mine at Welzow-Süd.
Contrary to fears, the occupations of the two opencast mines in the Lusatia region and the blockades of the coal railways between the power plants were largely peaceful and the police apparently had orders to let the activists go unhindered. There were isolated incidents of neo-fascist groups trying to attack individual groups, but these were either prevented from doing so by the police or deterred by anti-fascist self-protection groups.

In the Cottbus region in particular, there is broad support for the continued operation of lignite-fired power generation. The hooligan scene of the local football club Energie Cottbus, which is known for its extreme right-wing orientation, called for violent resistance against “Ende Gelände”. “A week before, the hooligans in the stadium had shown a banner with the words “Smash Ende Gelände”, the daily newspaper ‘Junge Welt’ reported. There are also problems with right-wing groups within the police force itself. A photo of nine police officers posing in front of a wall painted with the words “Stop Ende Gelände” was cheered in right-wing chat groups in the days before the blockades. On the action day, however, only a few hundred counter-demonstrators consisting of miners and AfD sympathisers, but also local SPD politicians, gathered outside the gates of the Jänschwalde power plant.

In the state of Saxony things were much different. Here, the arch-conservative Christian Democrat state government pushed ahead with a state-wide ban on assemblies and wanted to criminalise the entire climate movement. Nevertheless, more than 1000 climate activists moved to the open pit lignite mine and occupied it for several hours despite the resistance of several hundred police officers. The police took brutal action against the occupiers, used truncheons and pepper spray against the sit-in blockades, and several hundred protesters were surrounded and detained by the police. There were also dozens of arrests. Even after the end of the action, hours later in Leipzig, 30 km away from the open-cast mine, two people walking around in white coveralls were detained by the police and their shoe soles examined for traces of coal.

Following the protests the activists of “Ende Gelände” declared: “2019 was the year of the climate movement, but a lost year for climate justice. We must act now, because the climate crisis radically threatens our future. That’s why we reacted with radical protest today,” said Johnny Parks, spokesman for Ende Gelände. “We are in the right place at the right time. Next week, the federal government wants to pass a coal phase-out law that will sacrifice the 1.5 degree limit – not us! We are not idly watching how politicians and corporations are destroying our future. Our protest today at the places of destruction is a clear sign of climate justice and an ecological and just system change,” Nike Mahlhaus added.