For over a decade Germany’s political class has justified austerity with the pretence that “We cannot burden future generations with debt”. For the same politicians with regard to CO2 reductions it was, as the Germans say, “Scheissegal” (We don’t give a shit) 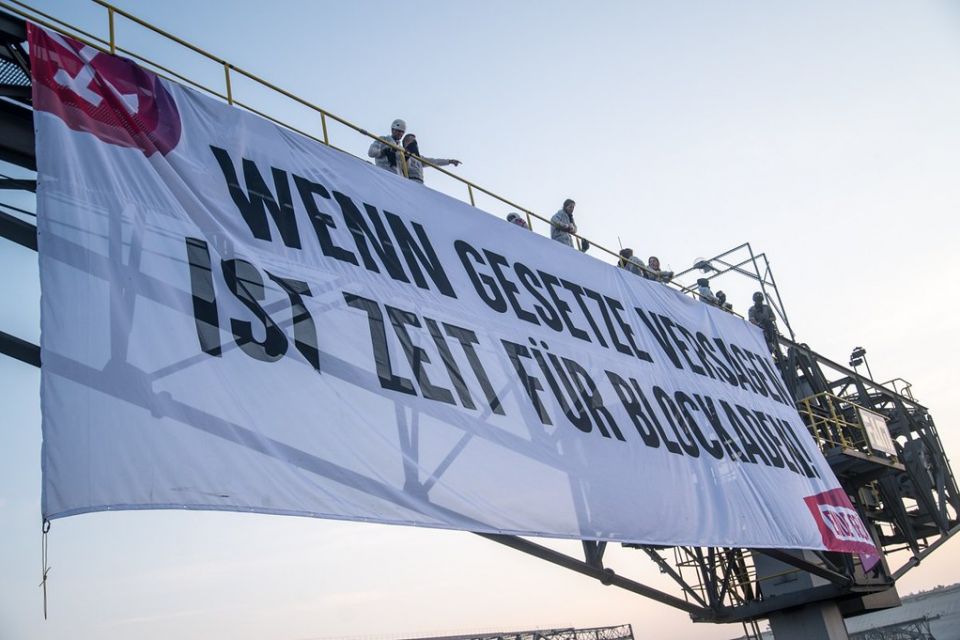 “When laws are wrong it is time to block lignite mining” (Protestors ccoupy a coal excavatorin the open lignite pit in Jänschwalde, Germany)

Climate policy in Germany has been characterised for years by formalistic compromises, bureaucratic hurdles, and postponement of overdue fundamental decisions into the distant future. The grand coalition of Merkel’s Christian Democrats and the Social Democrats is a master at hiding the various interests of powerful corporate lobby groups in seemingly innocuous laws. This is also what happened in the current climate protection law, which was passed in both parliaments, the Bundestag and the Bundesrat, in 2019. It stipulates that by 2030 CO2 emissions must be reduced by at least 55 per cent compared to 1990 levels. Zero CO2 emissions are targeted for 2050. But at what pace in the various sectors these reductions will be achieved after 2030 – the law leaves that completely open. In other words the grand coalition left it to a later government to bite into the sour apple.

The fossil fuel and German car industries in particular were euphoric, as they were granted relatively moderate transition periods compared to the demands of climate science and the requirements of the Paris resolutions of 2015. Business as usual could continue. But now Germany’s highest court, the Federal Constitutional Court, has ruled that parts of this climate law due to their corporate friendly largesse are unconstitutional.

Following complaints from various NGOs and individuals close to the Friday for Future movement, the Court issued a sensational ruling on 29 April:
The current climate protection law violates the civil rights of an entire generation.

Referring to the fundamental rights article 20a in the German constitution, the judges say that the state has a protective function and the court – and this is new – also applies this to climate change: “The State shall also, in responsibility for future generations, protect the natural foundations of life and animals within the framework of the constitutional order by legislation and, in accordance with law and justice, by executive power and the administration of justice.”

According to the constitutional judges, young complainants in particular are threatened by the Climate Change Act, such as 22-year-old Sophie Backsen from the North Frisian island of Pellworm, who lives on a farm just above sea level: “The complainants, some of whom are still very young, have had their liberties violated by the challenged provisions.” Already now, parts of the island are regularly under water during storm surges.

These people are affected by climate change today and even more so in the future, the judges said. The state must therefore ensure that fundamental rights remain guaranteed in the distant future. The natural foundations of life must be treated with care. And they must be bequeathed to posterity in a condition “that subsequent generations cannot continue to preserve them only at the price of their own radical abstinence”. In other words splurge on CO2 today, reduce radically later: them, not you.

It is therefore a matter of distributing the emission reduction targets in a way that is fair to all generations. “According to this, one generation may not be allowed to consume large parts of the CO2 budget under a comparatively mild reduction burden if this would at the same time leave a radical reduction burden to the following generations and expose their lives to comprehensive losses of freedom,” the judges wrote in their verdict.

The mention of the CO2 budget still available is also new in the jurisprudence of the constitutional judges. This is because the budget can be used to calculate much more precisely how much time is left to meet the 1.5 degree target.

Referring to the decisions of the Paris Climate Agreement of 2015, the judges in Karlsruhe state that humanity has only a very limited CO2 budget left if the 2 degree or 1.5 degree target is still to be achieved. And the German climate law imposes a “substantial reduction burden” on the generation after 2030 without precisely distributing it among the various sectors. Here, the court demands that the legislator make significant improvements by the end of 2022.

In order to preserve civil liberties, the legislator should have made provisions “to mitigate these high burdens”, the judges ruled. In addition, they demanded “precautions to ensure a transition to climate neutrality that preserves liberties”. “In doing so, the relative weight of the climate protection requirement in the balancing process continues to increase as climate change progresses.” And the judges demand that the federal government legislate “with foresight” and not, like the Climate Change Act, violate the civil liberties of an entire younger generation. No federal court has ever said that with such clarity.

However, the judges point out that in the future, even serious infringements of freedom to protect the climate should be proportionate and constitutionally justified. “In order to achieve this, the reductions still required after 2030 will then have to be made ever more urgently and in the shorter term,” the court said. “Virtually every freedom is potentially affected by these future emission reduction obligations because almost all areas of human life are still linked to the emission of greenhouse gases and are thus at risk of drastic restrictions after 2030.”

In the coming months, which are marked by the current German election campaign, this ruling is likely to cause a lot of excitement. However, it is predictable that a tightening of the climate law will first be launched by the new federal government after the Bundestag elections in September. The focus will be on revising the coal phase-out law, in particular bringing it forward in time. This is because the majority of lignite-fired power plants, which alone are responsible for half of the CO 2 emissions in the energy sector, will according to the government’s current plan, which contradicted its own scientific advisory board, not be shut down until the mid-2030s. Apart from a still-pending decision by the EU Commission on subsidising energy companies to the tune of billions of euros for depreciated CO2 blaster, which could declare the coal phase-out law not “eu-compliant”, this is a big blow for Christian Democrat chancellor candidate Laschet, who is considered a close friend of the RWE which is the owner of most German coal power stations and mining.

After the ruling was announced, the plaintiffs reacted euphorically. One of the lawyers involved in the case, Felix Ekardt, described the judgement as “groundbreaking”. “This is the first environmental lawsuit to succeed before the Federal Constitutional Court”.

“It is truly a great day for quite a lot of people and especially for the young people who have been taking to the streets for their future for three years,” said Luisa Neubauer from Friday for Futures. “We were laughed at, laughed at, discredited – and now a court is doing us justice.” The climate movement can “now demand a 1.5 degree policy with a completely different self-confidence”.

The ruling has also been endorsed by the scientific community: Claudia Kemfert, energy expert at the German Institute for Economic Research DIW, explained:

“Luisa Neubauer is absolutely right. Today’s ruling is historic and
groundbreaking, and a defeat for the laggards in government who are
putting the brakes on climate protection. Climate protection requires
swift action and will not tolerate any delay. Climate protection is a
fundamental right, creates generational justice and freedom for all. The
ruling creates enormous economic opportunities for a new start out
of the Corona crisis, as investments must be made in renewable
energies,energy efficiency or electromobility. Investments in future
markets create enormous economic opportunities, innovations and
sustainable jobs.”

Climate lawsuits have already had success in some other EU member states’ courts. In 2019, the Dutch supreme court ordered the government to reduce greenhouse gas emissions to a maximum of 25 per cent of 1990 levels by the end of 2020. This was the first time a court had ruled that promises made by a government under the Paris Climate Agreement were legally enforceable. The ruling also had direct consequences: The speed limit on motorways was tightened and the coal phase-out accelerated. In France, too, the highest court, the Council of State, at the end of 2020 obliged the government to adopt tougher climate laws. The legal battle centred on Article L.100-4 of the Energy Code, which calls for a 40 per cent reduction in greenhouse gas emissions by 2030 (compared to 1990). These targets, previously considered “soft law” and thus in fact not binding, have now become “hard law”, obliging the state to take concrete measures to reduce its CO2 emissions.

Richard Murphy – The right answer to ‘How are you going to pay for it?’

A short, but good piece on how small government ideology is dressed up to look erudite, but in the end is simply neo-liberal trope. Richard Murphy is Professor of Practice in International Political Economy, City […]