Throughout the EU whenever the Greens enter a government coalition they drop their moral posturing and become reactionary, power hungry politicians just like the rest.

After two years of occupation of the village of Lützerath by dozens of climate activists on the edge of the Rhenish lignite mining area Garzweiler 2, a shut-down took place at the weekend: 35,000 demonstrators marched in pouring rain through dirt and mud towards the village, which had been almost completely cleared by the police beforehand. The police protected the private interests of Europe’s largest Co2 emitter, the RWE corporation, with a massive contingent.

Heavy clashes broke out on the edge of the lignite mine. As a result, several demonstrators were seriously injured with broken bones and head injuries, and some police officers injured themselves because they got pepper sprayed in the face themselves in the strong wind or fell over in the mud.

The Rhenish lignite mining area is managed by the RWE corporation, which has turned this region between Cologne and Aachen into a lunar landscape in recent decades. Two of the three largest lignite-fired power plants in Europe are located here. RWE is the largest German energy company and at the same time one of the 100 largest CO2 producers in the world.

In October 2022, the Green energy minister Robert Habeck reached a “compromise” (according to Habeck) in negotiations with RWE: RWE will phase out lignite-fired power generation eight years earlier, in return for which the power plants will be allowed to emit significantly more CO2 than the agreement of 2018 and, above all, individual units will not be shut down in 2022, but will continue to run for 2 or 3 years. In return, Lützerath will be dug up so that the huge coal mine Garzweiler 2 can be exploited even further. Minister Habeck cheered in front of the press: “This is a good day for climate protection”. But how much CO2 will actually be saved? Various independent experts have come to a disastrous conclusion: Almost zero.

The opposition party die ‘Linke’ (which is not represented in the Düsseldorf state parliament) writes: “With the 2022 coal compromise, no CO2 will be saved because the same amount will be emitted by 2030 instead of 2038. This means that Germany will neither meet its sectoral targets nor pursue a policy compatible with the 1.5 degree limit. The compromise violates the Paris climate agreement. In order to achieve the 1.5 degree target, a coal phase-out path would be necessary in which only a maximum of 200 million tonnes would be produced in the Hambach and Garzweiler opencast mines by 2028; RWE, on the other hand, plans to produce 780 million tonnes of lignite.”

The deal between the government and RWE is also a clear violation of the of the Federal Constitutional Court decision of 2021, which requires the federal government to make a significant reduction in CO2 emissions well before 2030, in order not to further endanger the the living conditions of future generations even further.

For RWE, the compromise is a very profitable deal. Because according to the decisions of the EU Commission, the CO2 tax will be raised significantly after 2030. This will make the operation of lignite-fired power plants even less profitable. The bottom line is that Minister Habeck has secured billions of euros in addtional profits for the RWE Group.

Lützerath – the climate policy emperor is wearing no clothes

The energy policy of the Greens in the past year 2022 served first and foremost to secure energy supplies for German industry. No matter from where and at what price. Minister Habeck bought gas from Qatar, had LNG terminals built in Wilhelmshaven and Greifswald at lightning speed to cushion the sanctions against Russia for German industry. This also included taking over the 40 billion debts of the Uniper Group, which was getting into trouble due to long-term gas supply contracts with sales prices far below purchase prices.

With this priority of securing corporate interests, climate protection fell by the wayside for the Greens and the traffic light coalition. When it comes to climate protection, the Greens have done a complete U-turn in the last year: neither has the expansion of renewable energies been accelerated, nor have agreements been reached in the governing coalition on the reduction of CO2 emissions in the transport sector. In fact, CO2 emissions have risen throughout Germany! An embarrassment for the Greens!

The energy policy consequence of the sanctions against Russia was the capping of gas imports. This led to a significant increase in the share of lignite and hard coal in electricity production in Germany. The main beneficiary of this was RWE with record profits of several billion euros in 2022.

Where does the anger of the 35,000 in Lützerath come from? 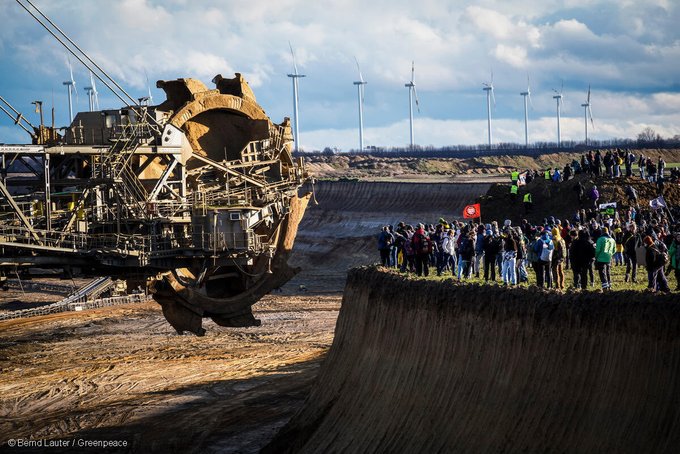 In the 2022 election campaign, the Greens in the German federal state of North Rhine-Westphalia had won the election with, among other things, the promise “Lützerath remains”. No sooner had they taken their seats on the government benches than the opposite was decided in the coalition agreement with the CDU. Lützerath is to be mined.

The anger of the 35,000 is directed against this 180-degree turnaround by the Greens. Before the demonstration on Saturday, Green party offices in several cities were occupied, the windows smashed and the entrances nailed up with the yellow crosses of Lützerath. Prominent climate activists from ‘Friday for Future’ like Greta Thunberg and Lisa Neubauer demonstratively let themselves be carried away by the police during attempted blockades in Lützerath. Some Green members of the state parliament tried to declare their solidarity with the climate activists. But the shambles are huge for the party. Even after the demonstration, there are no critical voices in the party leadership. As in the Ukraine war, the responsible ministers Baerbock and Habeck are not publicly contradicted. Only the ‘Green Youth’, which was present in Lützerath with dozens, is loudly critical.

The alliance between RWE and the Greens is simply undeniable. When the police use massive violence against civil disobedience actions, with the help of RWE’s private security services, it is clear to everyone whose side the Greens are on.

Only through extra-parliamentary pressure on the streets or in the mud in front of Lützerath can the climate movement achieve success. Fortunately, the activists in Lützerath did not let themselves be divided into “eco-terrorists”, who throw stones and Molotov cocktails and only want to riot, as conservative local newspapers wrote before, and the “peaceful ones”.

Nut 100 km away, one of the biggest destructions caused by climate change in Central Europe took place the year before last. In the Ahrthal, more than 130 people lost their lives in flash floods caused by days of severe weather. The people at the demonstration in Lützerath know that the climate crisis has long since arrived here and that it is from here that the climate crisis has been partly caused. No pause or even reversal can be expected from the political parties or corporations, however greenly painted (such as the subsidiary of RWE “Green Energy”). According to Lützerath, the following applies more than ever: “Climate protection remains manual work”.

Odd that such articles are so rare, while those in mainstream media demanding more weapons, more death, more destruction, yet ignoring the possiblitiy of the use of nuclear weapons are like sand on the beach. […]

Robin McAlpine: This is how Scotland’s Economy can Survive the Coronavirus