Many believe that the German Greens are a leftist, ecological party. they aren’t. It is a neo-liberal party that prominently parades the remaining tattered remnants of its earlier environmental trappings. 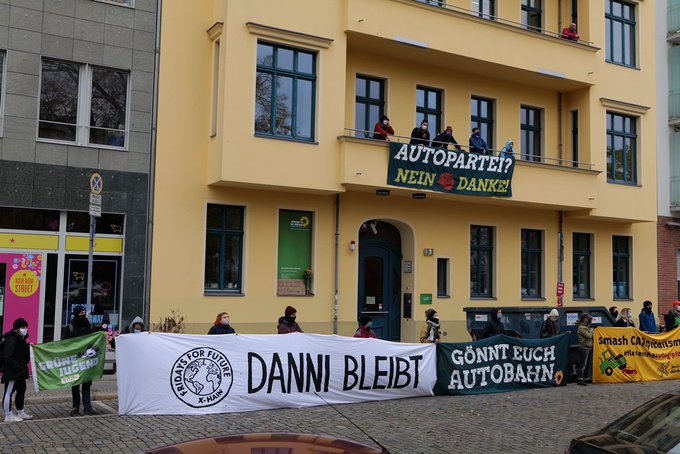 On 28 October activists from “Friday for Future”, “Ende Gelände” and “Sand im Getriebe” occupied the party headquarters of the Greens in Berlin in protest against the expansion of the Motorway A 49 in the state of Hesse. For weeks now, more than a hundred climate activists have been occupying the Dannenröder Forest, which is being razed to make way for the road construction. Contrary to earlier election promises, the Green Minister of Economics Al-Wazir had agreed to the destruction of the forest. The coalition between Merkel’s rightist Christian Democrats and the Greens in Hesse has been in place since 2014 and, as the conservative daily FAZ praises, is running “without conflict”.

For decades the Greens in Hesse have been well versed in putting aside their election promises from the periods of being in parliamentary opposition and implementing the opposite. The earliest prominent representative for this was Joschka Fischer, who was the first environment minister, also in Hesse, in the 1980s to repeatedly make rotten compromises, such as selling the continued operation of the Biblis nuclear power plant with increased safety requirements as a “success” of green “Realpolitik” instead of closing the facility as demanded by the party base.

The original sin of Realpolitik from the annals of the German Greens, was joining in the war in Kosovo. In 1999, the then Foreign Minister Fischer made a radical change of course in the first red-green government coalition at federal level: from the “peace party” of the 1980s to the modern party for the “defence of human rights” with the use of weapons. Later he spearheaded the German participation in the war in Afghanistan. This radical change of course resulted in grass-roots resentment and mass party resignations.

In recent years, this policy of false election promises has become a feature of green environmental policy on the government benches. Just two examples: Before joining a government coalition in Hamburg in 2008, the Greens were vehemently opposed to the commissioning of the huge CO2 centrifuge, Vattenfall’s Moorburg coal-fired power plant, and therefore won many votes. Their coalition partner Christian Democrats, however, demanded a green kowtow. At the party conference there was talk of “breaking our word” and “betrayal”, but the party leadership prevailed and was allowed to take up their ministerial posts. Moorburg went into operation. The conflict over the construction of the new railway station “Stuttgart 21” drove the citizens of the otherwise conservative state of Baden-Württemberg onto the streets. The Greens vehemently supported the extra-parliamentary protest and won the state elections in 2011 with the promise to stop the billion-euro project. But barely seated on the government benches, they agreed with the Social Democrats to continue the mammoth project. Green Prime Minister Kretschmann was even re-elected five years later.

How can this transition from Paul to Saul be explained?

1. Today’s Green voter base is more middle-class than when the Greens were founded in the early 1980s and has shed the radical tendencies that were reflected in the Greens’ programme and policies in the early 1980s. There is no longer any talk of “leaving NATO”, of ” exiting industrial society” or of the “end of growth policy”. Instead, the German army is sent to Africa on ” peace-building” missions and in the matter of the climate crisis the panacea is “green growth”.

2. From their original criticism of parliamentarism arose the demand for the separation of “office and mandate” and the “rotation principle”, i.e. following the political mandate rejoining the grassroots in everyday poltical and social life. However, the more mandates the Greens won, first at the municipal and later at the state parliament level, the more this principle was abandoned. As with the other parties, politics became a profession. The posts, salaries, and perks in both state administration and parliament were too attractive – and not least, being allowed to proclaim political statements on prime time television – few can resist this siren call even among the Greens. And when their mandate or ministerial office expired, many prominent Greens changed sides in recent years and became lobbyists for the natural gas and car industry, such as Joschka Fischer or the Green Secretary of State Berninger, responsible for consumer protection, moved to the chocolate multinational Mars.

3. The integration of the Greens into the German political system was achieved primarily through the entry and rise of Green politicians in various local and state administrations, which was initially viewed with suspicion by the other parties. It was here that the Greens very quickly learned the thinking and processes of modern bureaucratic administration with all their compromises and the structural violence hidden in laws and regulations.

The formulation of alternatives to the dominance of private property and the capitalist compulsion for growth does not occur in the lowlands of everyday political life. And when the pressure from outside, be it from scientists, as in the climate crisis, or from the ranks of the climate movement as in “Friday for Future”, seems to become too great, the party leadership around its leaders Harbeck and Baerbock takes refuge in a “policy of indifference”, as the German daily ‘taz’, with close ties to the Greens, a year ago aptly described it: “They claim to be in favour of radical clarity, but remain vague enough not to frighten anyone. Cleverly played indifference has become a characteristic feature of the Greens”.

This policy of indifference is the new dress in which the old Realpolitik has slipped. The Greens are still associated with the label “Ecology Party”. However, originally ecological concerns and demands in governmental responsibility are quickly dropped or sacrificed to the pragmatism of the coalition agreements with the Social and Christian Democrats. The most recent example of this is the approval of the Greens in the Bundesrat (the upper house of the German parliament) of the law for Germany’s coal exit law, which has been heavily criticised by all NGOs because coal-fired power stations are allowed to continue operating until 2038 and, in addition, the coal companies receive billions of dollars in premiums in return. Addtionally a new coal-fired power station Datteln 4 in North Rhine-Westphalia was allowed to go on line. This was simply too much for some environmental associations, who then resigned from the commission that had drafted the bill. However, the Greens in the state coalitions with the SPD and CDU did not want to jeopardise their coalition harmony and simply ignored the matter.

In the federal states of Berlin and Brandenburg, two ecologically and climate devastating projects are currently being launched with the explicit approval of green ministers. On 1 November, the new airport in Berlin, BER, went into operation with a decade delay. Construction costs tripled and not least due to the Corona crisis, the airport is completely oversized. It is the new dinosaur of air traffic and already outdated. The Green transport ministers and economics ministers Günther and Popp do not say a word about the devastating climate balance of air transport but repeat the mantra of “growth and jobs” like the other neo-liberal parties.

East of Berlin, the US Tesla group is building its first large car factory in Europe. Without a legally valid building permit and without a required environmental impact assessment, declared as unnecessary by the green minister of the environment in Brandenburg, hundreds of hectares of forest are cleared and the objections of the citizens are simply ignored. The promise of 12,000 jobs also mesmerises Green politicians and makes all ecological and climate policy objections to electric car mobility to be forgotten.

To sum up: the Greens are miles away from the widespread demand for a “system change” of the climate movement. Thanks to the policy of indifference, designed not to frighten off potential voters by overly radical demands or early commitments, the Greens have become an establishment political party. The Greens are not expected to bring about any social or climate-political change when they probably will form the government following the next federal elections. This makes the extra-parliamentary pressure from the climate justice movement all the more urgent.

Following six years of austerity in the United Kingdom and the suffering it has caused millions of households and will cause millions more, Richard Murphy believes not only is it time to alter course, but […]