Last week climate activists from thoughout the world met in Hamburg, Germany, to protest against German climate hypocrisy and the capitalist system responsible for climate breakdown 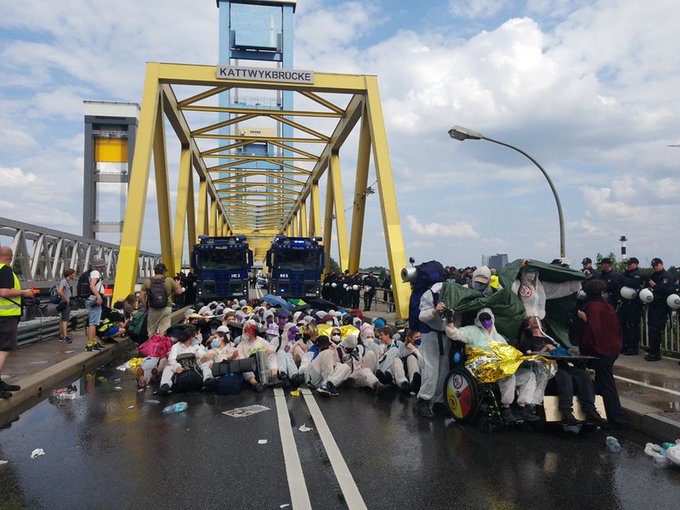 From noon on Saturday, 13 August, the port of Hamburg was closed. The entire goods train traffic was paralysed for hours due to track blockades. Trucks could not drive either because the important Köhlbrand Bridge to the container port was also blocked. In the course of its struggle against “fossil capitalism”, the climate justice movement has significantly expanded its scope of action thematically with the port of Hamburg as an important hub of global and neocolonial trade.

The central point of criticism of the climate activists is the plan of Germany’s traffic light coalition that includes the Greens to build twelve liquefied natural gas terminals in the coming years. But also the ramping up of coal-fired power plants that have already been shut down and the extension of the operating lives of the last three German nuclear power plants meet with great opposition from the climate movement. The Ukraine war and the threat of a gas supply freeze from Russia are being used by the Green Minister of Economics, Bobby “Green Gas” Habeck, as an opportunity for a total energy policy rollback “in order to cope with the coming crisis in winter”. A few days ago, Chancellor Olaf Scholz (SPD) announced that the first two terminals in Wilhelmshaven and Brunsbüttel would start operations at the beginning of next year. The Greens in particular are no longer talking about the promised and long overdue new energy policy and industrial restructuring.

For Charly Dietz, press spokesperson for “Ende Gelände”, the new natural gas infrastructure is “a gift to the fossil fuel industry”. The big energy companies were profiteers of the crisis, they had are racking up obscene profits, while many people do not know how to pay their electricity and gas bills in the coming winter.

With corresponding anger 2000 climate activists travelled to the System Change Camp in Hamburg last week. Among them were many from other European countries.

“The system is the crisis! Society lurches from crisis to crisis. (…) In the case of climate breakdown, two systems are confronting each other, which will decide what our future will look like: The dominant economic system, based on profit maximisation and constant growth. And the Earth system, on whose finite resources and intact ecosystems humanity depends. Both systems are not compatible with each other”, stated the call for the “System Change” camp in Hamburg, which took place from 9 to 14 August. More than 30 groups followed the campaign, which was mainly written by “Ende Gelände” and the group “Ums Ganze”. Over 2000 activists camped in the Hamburg district of Lurup. Among them were many from other European countries.

The programme was correspondingly international. Many events dealt with the neocolonial exploitation of fossil resources. For example, people from Argentina reported on the devastating consequences for the local population of fracking gas exploration by the German company Wintershall AG.

In the port of Hamburg, tens of thousands of tonnes of coal, mainly from Colombia, are unloaded from ships daily. This coal is nothing other than “blood coal”, because in the open-cast mining areas the indigenous population is driven out, the rivers are polluted and whole regions become uninhabitable, as an activist from Colombia impressively described the consequences of fossil capitalism in the countries of the South.

Hamburg’s port is also the logistics centre for the transshipment of uranium from Nambia, Kazastan or Canada, which is then transported to the fuel cell factory in Gronau and shipped back abroad as uranium fuel rods via the port. The city of Hamburg also wants to have LNG gas terminals built. Not to be forgotten are the three oil refineries in the port area. Every day, dozens of goods trains with oil products roll through the port area.

But the camp area was not only the venue for numerous events. Three columns (“fingers”) were formed in the action plenums to run on separate routes to their destinations in the port area on Saturday. Thus, hundreds of mostly younger activists trained to break through police barriers or to distract and deceive the massive police presence in the harbour area, which had been guarding every bridge for days.

One day before the big day of action, the Green Finger had travelled 250 km away in three buses to block the LNG terminal construction site in Wilhelmshaven, . Even before that, dozens drove to Brunsbüttel at the mouth of the Elbe to close the entrance gates to the Yara fertiliser factory there. The Norwegian company Yara is one of the largest industrial gas consumers in Germany, producing fertiliser mainly for export there in future with using LNG gas. Fertilisers for the monocultures of industrial agriculture, produced with fracking gas. In terms of climate policy, it doesn’t get any more absurd than this.

On Saturday, the three demonstration marches, divided into the golden, pink and purple fingers, first marched together to Altona station, where a rally had been planned. “Today we will stand in the way of the big climate killer corporations. We are blocking fossil capitalism today. The port of Hamburg stands for the plundering of resources in the Global South and the unjust distribution of wealth. The big climate killer corporations make billions in profits from the colonial appropriation of fossil raw materials. With our protest we decry this climate crime and will prevent the expansion of further fossil infrastructure, said Charly Dietz of “Ende Gelände”.

Contrary to the announced demo route to the Elbphilharmonie, the three fingers boarded public transport and headed south to the harbour. There, three vigils had been organised at strategically important points for transport logistics. Although the police closely escorted the three columns with a large contingent, the 1500 activists running in white coveralls and colourful parasols managed to get onto the freight tracks at three points and occupy them. From the midday onwards, the goods trains were stuck in traffic jams. In the meantime, a group of “Extincton Rebellion” and “Last Generation” activists had glued themselves to the road of the Köhlbrand Bridge, which is important for lorry traffic.

At two blockade points, such as the bridge to the Moorburg coal-fired power plant, which is currently shut down, the police took tough action to end the rail occupation. But despite pepper spray, water cannons, and batons, about one hundred and fifty activists remained on the tracks and could only be cleared after hours. Several hundred were surrounded by the police, paramedics were denied access, drinking water was not allowed to be distributed on the orders of the police. With temperatures of more than 35 degrees on the exposed street, this was dangerous.

The last fingers did not return to the camp until the evening hours amidst great jubilation. Everyone was exhausted from the heat and the brutal police crackdown. But still rather euphoric. Because at least the regional press had followed the protests closely. Halting climate breakdown is no longer possible without System Change – this has also reached the bourgeois press.

The alliance around “Ende Gelände” was satisfied with this experiment of holding blockade actions for the first time in a big city at widely separated points: “We have shown this week: the climate justice movement has full force. Whoever still invests in fossil infrastructure in 2022 has to reckon with our resistance. We stand closely together against fossil capitalism and colonial exploitation. With us, there will be no fossil fuel rollback.”

Chris Bambery – In Spain Democracy has become a major Crime

We have pointed out that the trial against 12 Catalan leaders for “Rebellion” has become a political show-trial. Chris Bambery was so kind to write a report of the trial proceedings from the past week […]

Ben Wray – Are We Ready to Adapt to the Coming Age of Climate Refugees?

The problem is that no one is seriously discussing most of the true consequences of the climate disaster. Plastic straws are almost irrelevant. This requires a policy upheaval that is nowhere to be seen. In […]