In the UK the second strike within two years by academics and staff at 60 universities begins. They are opposing the financialisation of higher education. We are very proud that a number of our authors and many readers are participating in the strike. All our solidarity! 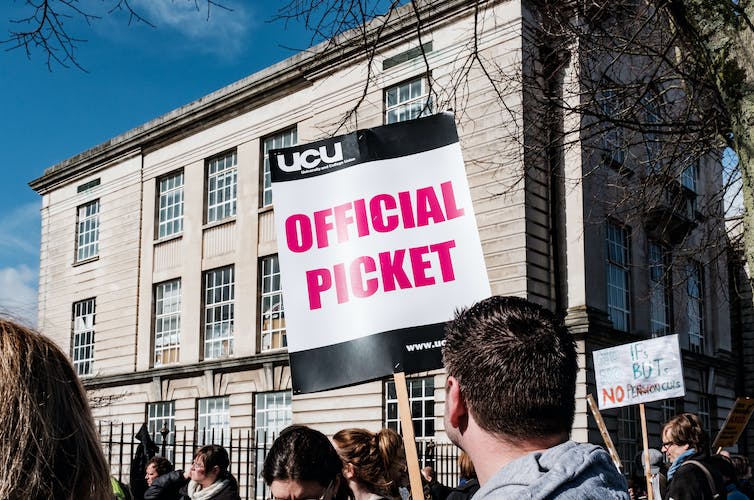 Eight days of strike action announced by academics will run November 25 until December 4. After that, industrial action will continue with academics working to contract – this means they will be unable to cover for absent colleagues or reschedule lectures lost to strike action.

The universities affected include many of the biggest and most prestigious institutions in the UK. And the action comes less than two years after tens of thousands of workers walked out over changes to their pensions, striking for 14 days in 2018 in a wave of action on 65 British campuses.

Why are academics striking?

The dispute over changes to the universities pension scheme (known as the USS) is still unresolved meaning that academic staff still face cuts that could leave them significantly worse off in retirement.

During the last round of action in February and March 2018, 65 universities voted in favour of strike action in the USS dispute. And the resulting strikes saw the University and College Union (UCU) succeed in forcing employers to drop plans to change pensions at universities established before 1992.

Universities UK, the umbrella group for UK universities that manages the pension scheme, claims the change is needed because there is not enough money to make the scheme financially viable.

In August 2019, universities pushed through plans to make members pay 9.6% of their salary into their USS pension. Employers argue that higher contributions are needed to meet increasing costs of the scheme. But a Joint Expert Panel report argued that employers should reevaluate their attitude to risk and dispute the USS valuation of contributions. The union is now challenging the size of staff contributions – currently at 8.8% – which it thinks should be capped at 8% of a lecturer’s salary.

On top of the pensions dispute, university workers in 2019 are also striking over pay, equality, casualisation and workload. Following the most recent ballot, staff at 43 universities will be taking action over both disputes; 14 over just pay and conditions; and three over the pension scheme.

In total, 140 universities were balloted over pay and conditions, as well as all 69 institutions affected by the USS changes. According to the UCU, strike action was backed by 79% of voters in the pensions ballot and 74% in the ballot on pay, equality, casualisation and workloads.

What are the wider problems?

Until recently, government policy in the UK has encouraged an expansion of higher education. The aim being to increase participation and help create a more educated workforce. This expansion has led to competition between higher education institutions. Students are increasingly positioned as consumers – with institutions working to improve the extent to which they meet “consumer demands”. This has changed the relationship between lecturer and student to one of customer and service provider.

Higher education is a post-experience good. This means that its impact is difficult for the consumer to ascertain. So in a competitive education market, universities need to assure as much quality as possible to be “market leaders”. This leads to more control over the work effort and the commodification of education – think quality control, auditing and ranking performance. Yet, rather than developing a competitive, well-functioning education market, the marketisation of education has been paralleled by an increase in state intervention, through, for example, the introduction of the Teaching Excellence Framework. This and other measures of ranking universities, such as the Research Excellence Framework, have led to an increased use of performance targets in research and teaching.

Academics are understandably concerned about the consequences of marketisation. Specifically, the transformation of what is an abstract, intangible, non-material and relational experience, into a visible, quantifiable and instrumentally driven process. This underlying concern cannot be ignored in trying to understand the strength of disquiet in the sector, which goes way beyond pay and pensions.

The university strikes show how a dispute which began around a fairly technical employment issue (pensions in the 2018 dispute), can develop a momentum of its own, to become a catalyst for a much wider expression of dissatisfaction – which intensified and accelerated after the introduction of higher fees in 2010.

How effective are strikes?

Strikes can be a sign that workers have broken with a habit of submission and passivity. They indicate workers are beginning to question the authority of management and are willing to dare to defend their interests. Strikes give workers a sense of their own collective strength, demonstrating in practice the dependence of employers and the wider society on workers’ labour.

Strikes in higher education have been shaped by the specific political context of the sector. This includes the drive to marketisation that has arguably led to a greater politicisation of industrial relations and trade unionism. Students making claims for compensation for missed teaching also gives workers in the sector more leverage when taking action as universities will want to avoid having to make refunds.

The politics of union leadership can also be an important ingredient in understanding the strikes. Jo Grady was elected as general secretary of the UCU after the wave of strikes in 2018, which arguably politicised a new generation of academics in the sector. Ideologically committed union leaders and activists have been a crucial driving force of trade unionism. They have played an influential role in using such politics to galvanise the broader membership into action. And by linking a strike over pay and pensions with the underlying issues of casualisation and workloads – effects of the drive to marketisation – it resonated with a large number of workers in the sector.

The relative success of the 2018 strike over pensions gave workers in the university sector a renewed sense of confidence in the efficacy of collective action. This confidence has been reignited by anger and frustration at the lack of progress in negotiations – even though the vice-chancellor of Essex University has called for employers to compromise. The General Sectretary of UCU has said that employers seem to want to ‘test the mettle of staff’ and that they are misjudging the strength of anger. And with warnings of further strikes to come this conflict looks likely to endure.

Michael Roberts – No V-Recovery for Britain

Yesterday the British Chancellor presented his new budget. What is happening in Britain reflects what is occurring in the EU. Things are not going to plan. Michael Roberts is an Economist in the City of […]

We at BRAVE NEW EUROPE have been highlighting Modern Monetary Theory. Here is another excellent article by Richard Murphy, this time in conjunction with tax avoidance Richard Murphy is Professor of Practice in International Political […]