Neo-classical economics is falling apart before our very eyes. While academics of the school try to prop it up and Germany alone clings to it, in the real world things are moving on.

It is usually only a matter of time before ideas for which there is clear empirical evidence can no longer be denied even in those circles that initially reject them outright for ideological reasons. This was the case with government debt, and now it is gradually becoming true for the relationship between wages and prices.

One has to imagine that an editor of the conservative German newspaper Frankfurter Allgemeine (FAZ), in an article concerning zero interest rates, first explains to his astonished readers that companies in Germany and elsewhere – in contrast to the “traditional textbook model” – have become savers. This leads this editor, Gerald Braunberger, to the conclusion that for “fundamental” reasons interest rates must be low. Finally, he blames German „euro-critical economists” and “bank economists” for the fact that there has been a one-sided assignment of blame to the ECB, which obviously contradicts all reason. Braunberger concludes:

“Although these voices have not been completely silenced, the attempt to isolate Germany from the international debate has failed. In the long run, scientific knowledge cannot be ignored. This is why the view, which has long been widespread internationally, that low interest rates are due to both fundamental economic reasons and monetary policy intervention, now dominates both among German economists and in the German financial sector.“

This is revolutionary. If he had taken note of the fact that there are economists in Germany who have very long held this position, but were pushed into the left-hand corner by the FAZ for decades and systematically ignored, he would probably have had to fear for his job.

But this is not the end of my tale of wonders. Another flagship of economic conservatism, the Swiss Neue Zürcher Zeitung (NZZ), goes one step further. It published the headline “When social partners become monetary politicians” and asks whether wage increases can and should be used to boost inflation. The basis for the article in the NZZ is of course not its own insight, but a paper written by employees of the Bank for International Settlements (BIS,  here).
Indeed, in the paper the authors explain that it is worth considering bringing inflation back on track with the help of a social consensus on appropriate wage increases, because it can be shown empirically that the relationship between inflation and unit labour costs is very close. Various nations are presented – such as France and Italy – where in the past, it has been possible to reduce the rate of inflation through cooperation of the social partners without excessive social costs. This is impressive for an institution (even if the authors do not represent the BIS) that feels that it is the bank of central banks and therefore usually represents central bank positions.

Nevertheless, growing insight by central banks (and some governments) into the relationship between wages and prices is by no means new. The Japanese government under Prime Minister Abe was one of the first to recognise that such a link exists and that one should work with it (see this piece in German). The ECB also argued in a working paper in spring 2019 in a similar vein (see here).

In our book “The End of Mass Unemployment”, published in 2007, Friederike Spiecker and I described the link between unit labour cost increases and inflation in a perfectly clear and unambiguous manner (pages 68 to 71). The empirical evidence for Germany was already then obvious and undeniable over a period of more than forty years (Figure 1, which corresponds to the original Figure 8 in the book). 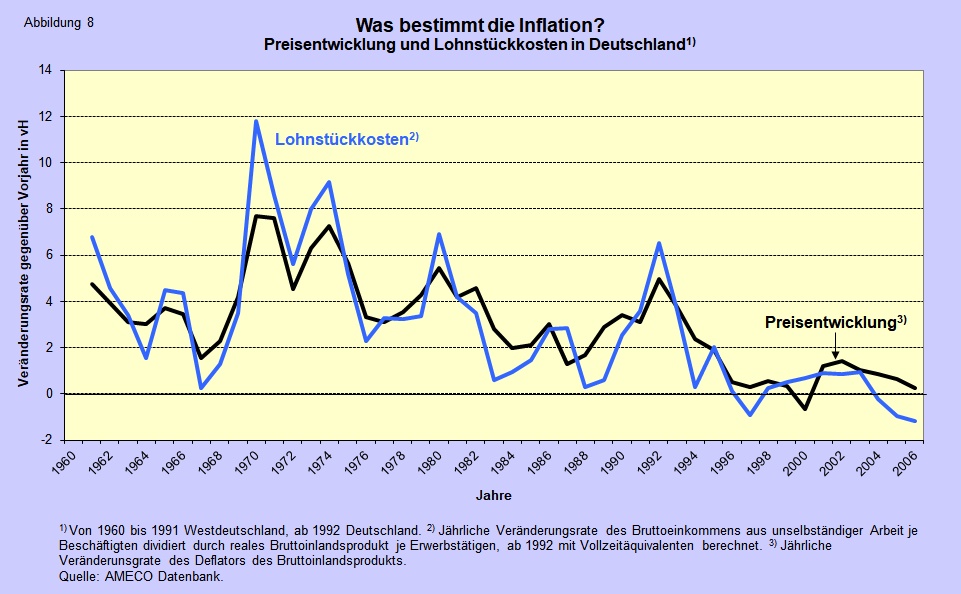 In 2018, I last presented calculations for the entire industrial world (Figure 2), which for two consecutive periods (for 20 and 16 years) leaves no doubt that only with appropriate wage policies can inflation be avoided just as much as deflationary developments. 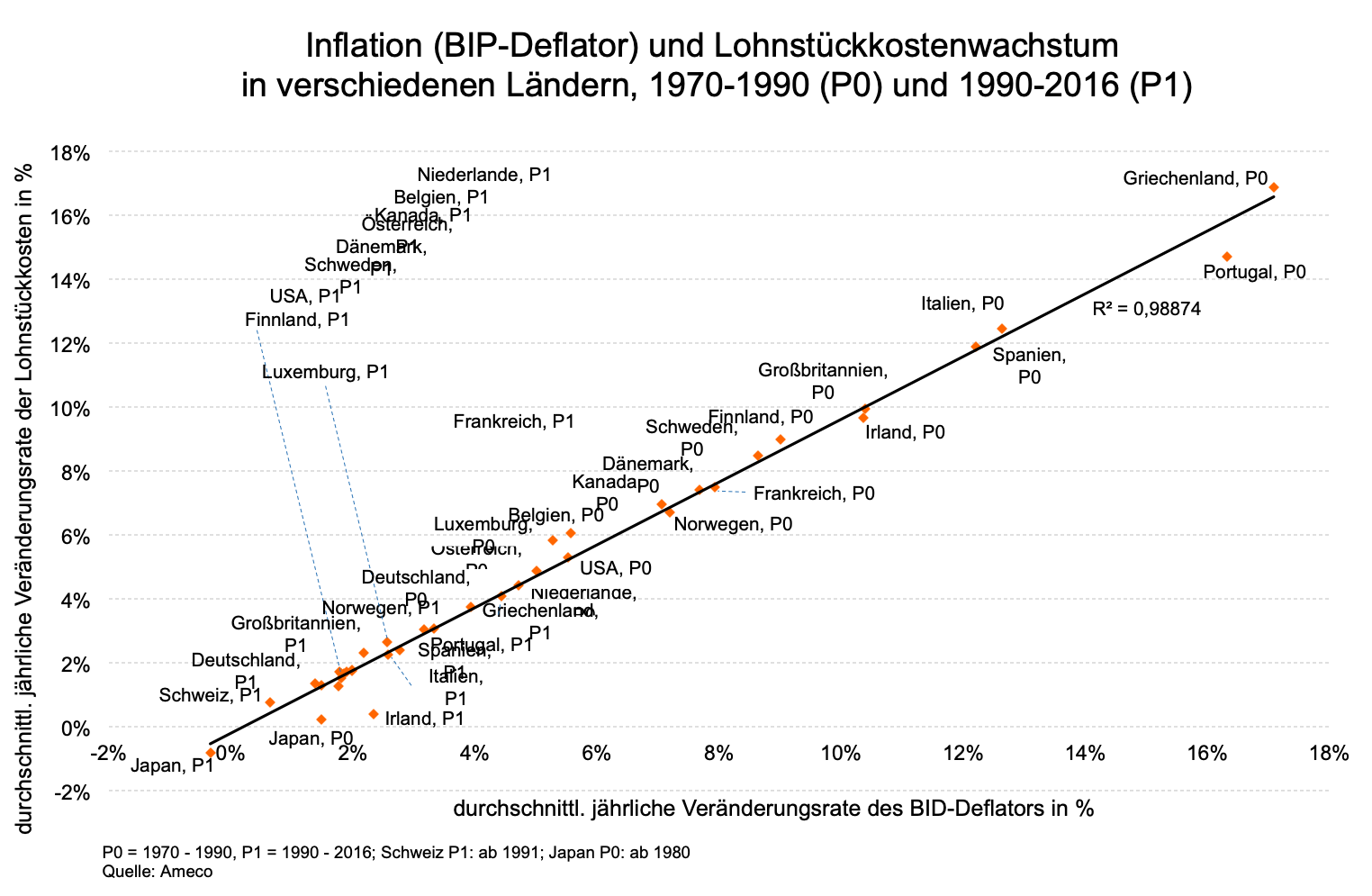 But despite this evidence, the prevailing neoclassical doctrine refuses to draw the necessary conclusions. This is not really surprising, because the explicit acknowledgement of this connection throws the entire neoclassical theory off course. After all, then there is no labour market that functions according to the usual microeconomic concepts of supply and demand. If there is no such labour market, there is no general market equilibrium, which makes almost all the models that economists currently are working with theoretically and empirically obsolete.

What is remarkable about the paper from the BIS, in my opinion, apart from the topic itself, are two aspects in particular: First, the two authors note quite succinctly at one point (p. 15) how important “public knowledge” is for companies that not only their own wage bill increases when wage increases are implemented at the industry level, but also those of their competitors, so that companies do not fear a loss of market share. This, however, is in strict contrast to the micro-economically based equilibrium model, because there the anonymous market determines prices and there is no room for publicly available information. The fact that companies behave differently when they have this knowledge proves precisely that collective bargaining has the character of a public good, which individuals only demand when they know that everyone (must) demand it.

Second, the authors write at the conclusion of their paper (p. 17) that the proposals to let nominal wages rise by social consensus in such a manner that the inflation target is constantly met have nothing to do with real wages. This is to say the least misleading. It has nothing to do with real wages if it is taken for granted that real wages always increase in line with productivity. But this is by no means self-evident in a world dominated by neo-classical economics. If one follows the authors’ proposals and always increases nominal wages in such a way that unit labour costs follow the target inflation rate of the central banks, real wages always rise in the long run at the same rate as the growth rate of productivity. This is absolutely reasonable, but it is in stark contrast to the prevailing doctrine in economics.

It is regrettable that so far even the trade unions in Germany have not understood (or have not wanted to understand) the importance for them of the close relationship between prices and unit labour costs. The trade unions would find it much easier to negotiate wages (especially in the European Monetary Union) if they insisted that the target inflation rate set by the ECB did not have to be negotiated, but could be set from the outset as inevitable. If they could then still break away from the micro-world of many of their members, where – as in the neoclassical theory – lower real wage increases are good for jobs, then it would not be far to a world where wage increases followed rational considerations instead of the distribution of power in the so-called labour market.

The auditing profession has become synonymous with fraud. Richard Murphy is being generous by not mentioning that the same auditing firms advise the same companies on how to evade paying taxes, not to mention how to […]