… is a Europe where people treat each other honestly and fairly. But unfortunately that does not exist. The European election campaign of the political centre was dedicated to just one goal: brutally suppressing the truth.

It is said that the first victim of every war is the truth. This applies increasingly to election campaigns as well. In particular since the mainstream parties of the middle have identified the “populists” as opponents truth has become irrelevant. Even with regard to Europe, where the populists are naturally also nationalists, then – at least for the sake of an objective political discourse – even in the corporate media behind the Centrists, lies have replaced reality.

What should we have talked about in this 2019 election campaign if we had wanted to be honest? Well, of course we should have talked about the euro crisis, which is neither overcome nor intellectually and politically understood. The clearest expression of this is the continuing crisis and the conspicuous weakness of growth in southern Europe, including France, and the resulting extremely high unemployment.

The comparison between the US and the Eurozone in terms of unemployment shows the grandiose failure of the past years.

Unemployment in the European Monetary Union and the USA 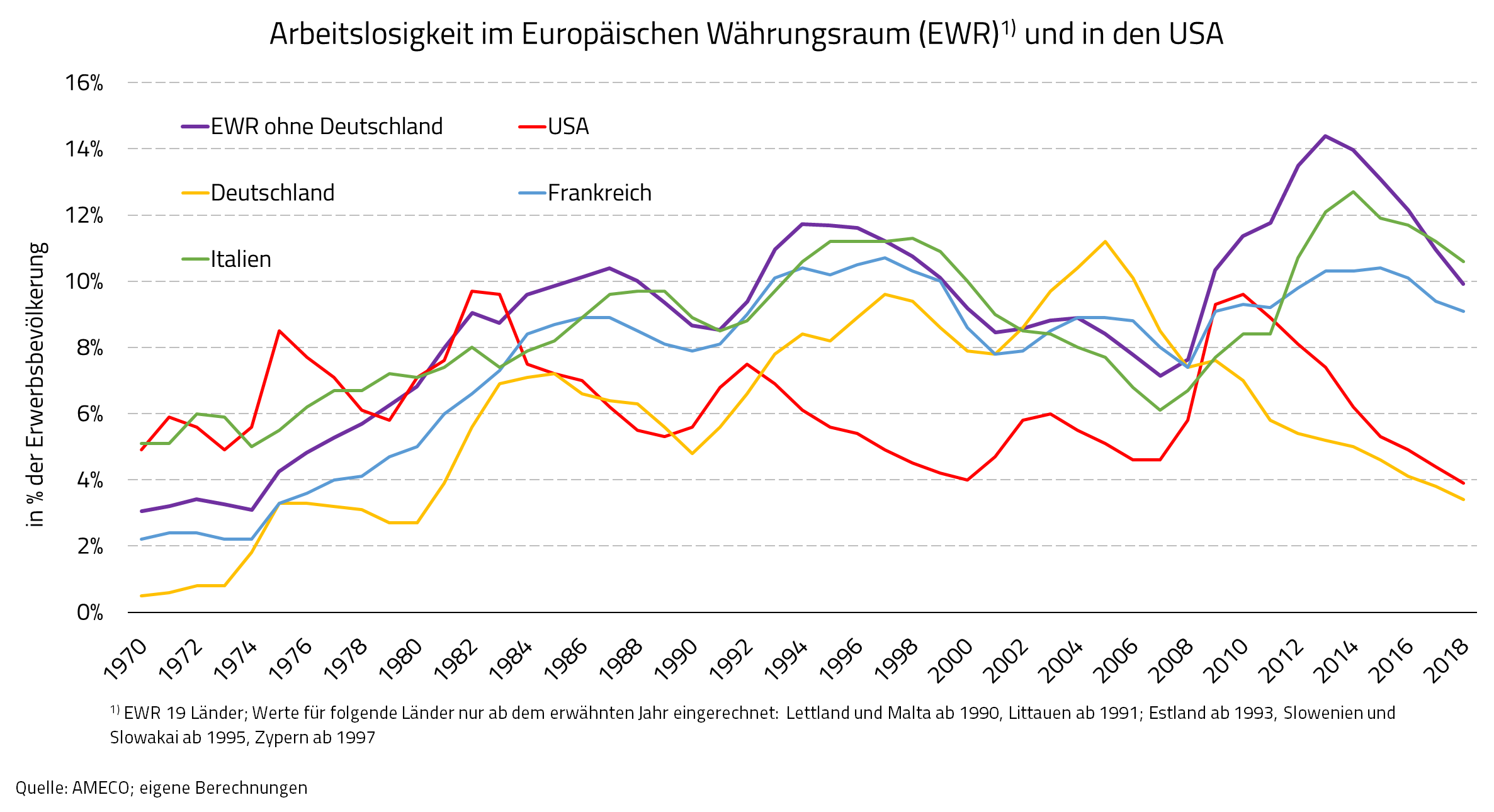 Under Obama and Trump, the unemployment rate fell steadily after 2010 and reached a level in 2018 that can be regarded as full employment in the USA in a long-term comparison. In the European Monetary Union (EMU), unemployment is still at a level that is extremely far from satisfactory. This applies in particular to the EMU states without Germany, with a rate of ten percent. France and Italy are still above their 2009 pre-crisis levels. Only in Germany has unemployment fallen steadily since 2009 and is thus moving in a similar direction to that in the USA.

Would this dramatic discrepancy between the largest member state and comparable countries such as France and Italy not have been worth discussing? Isn’t this the decisive reason for the strengthening of national and nationalist movements and parties? Would it not have been necessary to openly discuss what is going so wrong with European economic policy with such a disastrous result?

… is swept under the carpet

But there was no mention of this in the entire election campaign, as far as I could discern. Whether European “Leading Candidates” or national politicians, economics and economic policy were irrelevant. The European monetary system was no more an issue than the huge German current account surpluses or the insane austerity policy that Germany imposed on other countries (and itself). I have seen several television programmes in which the moderators clearly stated that migration, climate change, and social issues are the only topics being debated and nothing else. Economic policy was obviously banned in the media from the outset because they wanted to suppress any unpleasant truth about European development in recent years.

This was probably not explicitly agreed, but there was no doubt a tacit consensus among the media executives that there was no reason for people to think critically about Europe. The enormous masses of programmes with which the public broadcasters filled entire evenings like a travel documentary and “showed” how colourful, exciting. and beautiful this borderless Europe is – if you ignore all the problem zones – exemplified this.

I already said in an public letter in 2017 that the systematic and conscious concealment of problems is nothing but a lie. If I know for a fact that my behaviour is met with harsh criticism from my neighbours, and I refuse to even talk about it, is it a lie or just disingenuous? If I repeatedly violate the rules I’ve imposed, but keep telling others to stick to these rules, what is it: just chutzpah or blatant shamelessness?

Germany is being glorified …

I sent my public letter to the German President in 2017 because he was constantly warning against frivolously dealing with the truth. This Federal President is now writing about the European elections:

“Germany is a big winner of European unification. A glance at the offices and factory buildings in our country is enough. Our economy benefits from the European internal market. It benefits from the common currency. And it benefits from Europe’s commitment to free and fair world trade. A strong Europe ensures full order books; that secures prosperity and jobs.”

And he adds – apparently without blushing:

“At the same time, the European Union is more than a successful economic area.”

What should one say? The president of the country, which has been economically saved at the expense of its neighbours for more than a decade (for which he has to assume personal responsibility), basks in the successes of German mercantilism. Yes, Germany benefits from the single currency because, like never before, under a Social Democrat-Green government it deceived and shamelessly undercut its neighbours. The fact that he also claims that the rest of Europe is a successful economic area does not have to be mentioned separately as a bald faced lie in view of so much audacity.

… even if it means lying

It is no longer surprising that German trade unionists are also in denial and ignoring their past sins, while portraying these as successes so that they too can cheer for Europe with the neo-liberals in this election. Whether they are officials from the provinces (as criticised by Albrecht Müller) or the chairman of Ver.di (criticised yesterday by Friederike Spiecker) is no longer decisive. They all join in the Ode of Joy for successful Europe, which cannot simply be left to the Right.

But those who openly lie, conceal the truth, or even deliberately divert the discussion away from the real problems are doing Europe a disservice. The masses of people cannot be taken for fools in the long run. In those countries, which have suffered directly from German policy, it is no longer as easy as it was a few years ago to sell the fairy tale of “structural problems”, which, unlike Germany, these countries suffered from. Their “homework” would have to be done by the Germans and their European technocrats, is still the Germans’ favourite solution when it comes to the European crisis. For almost a hundred years the world hasn’t seen the Germans prouder of themselves than in the past decade.

One could only maintain this fairy tale for such a long time because the economists in most countries adhere to the mainstream, in which everyone is always responsible for their own success. Better educated economists would have understood from the outset that the German special policy on wages in a monetary union is a fatal error. But now that parts of the Commission and the ECB have at least understood what has happened, Germany is using the power of its trade surplus to impose its primitive world view upon everyone else regardless of the consequences.

But conditions are changing. There you can rejoice on this side of the Rhine and manipulate the truth as much as you want, the naivety with which an Emanuel Macron tried to contain Germany with diplomacy and harmless proposals is a thing of the past. He and other “forces of the centre” will know after Sunday’s election that they must become much more radical if they want to save Europe and themselves. For Germany, Europe will no longer be “the answer”, but a big question mark.

As Cop26 meeting approaches, analysis shows world is on track for 3C temperature increase if present trends continue. It comes a no surprise that the effort of the EU and Germany are rated “insufficient”. The […]

For Kreibich the future of Europe depends on the development of democracy and sustainability on the continent. A bold vision and its realisation are necessary to enable Europe to thrive with a secure perspective. Rolf […]