Capitalism is celebrated by the liberals as a success story. But this success can only be seen in the USA – and, even then, only for reasons that are incompatible with the liberals’ own ideology.

In the second part I already pointed out that the neo-liberal revolution in Germany after 1980 was by no means a success story. Real GDP growth has been declining throughout (Figure 1), a result that would have been much more pronounced had it not been for the enormous demand effects of German reunification, initiated by the state, which resulted in very high growth rates for several years. 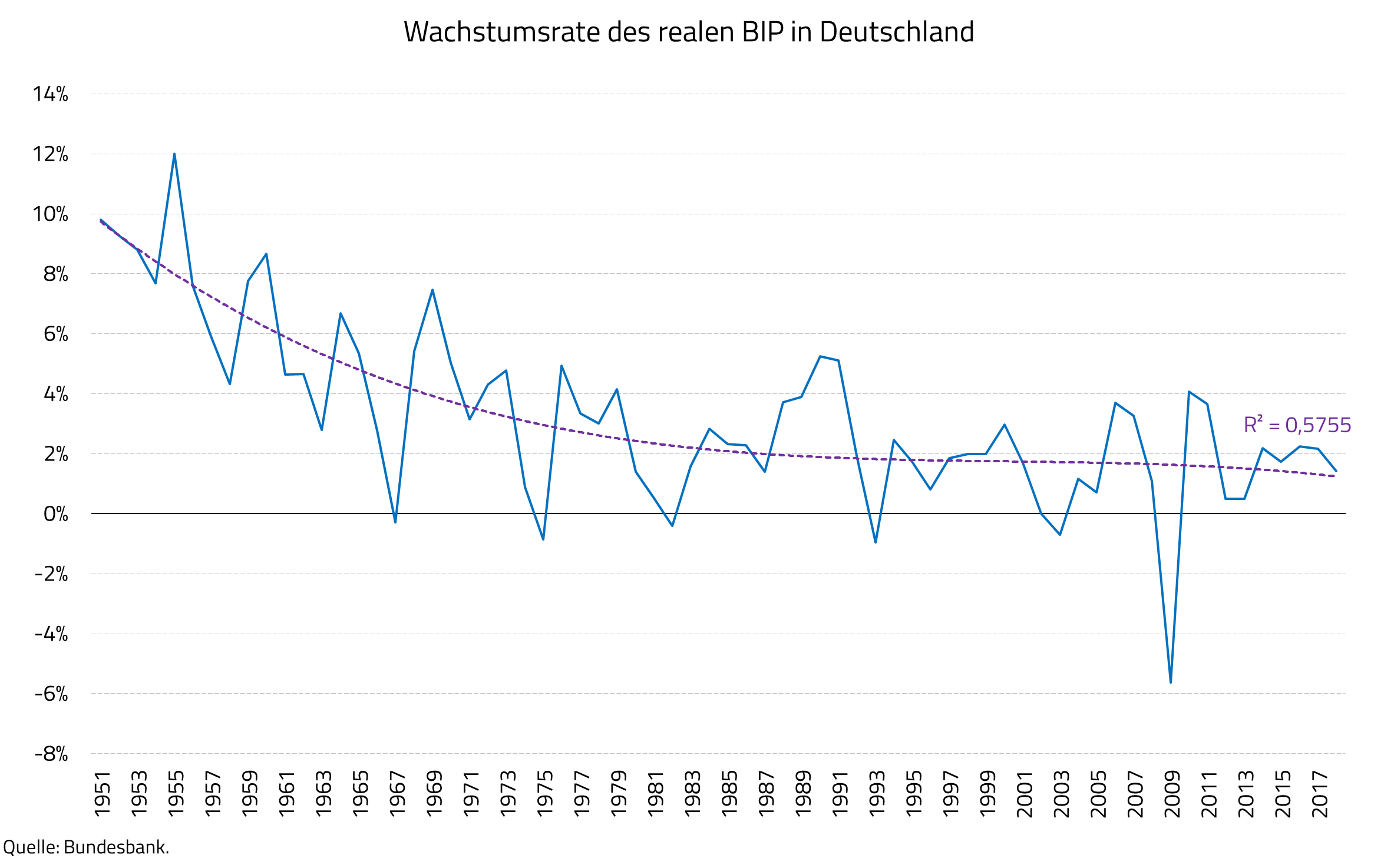 After the start of European Monetary Union (EMU), it was the positive effects of German wage dumping that prevented an even stronger slowdown in the growth of economic output.

In France, these two positive effects did not occur, so the slowdown was much stronger. After the Great Recession of 2008/2009, the economy did not really recover and unemployment remained high. 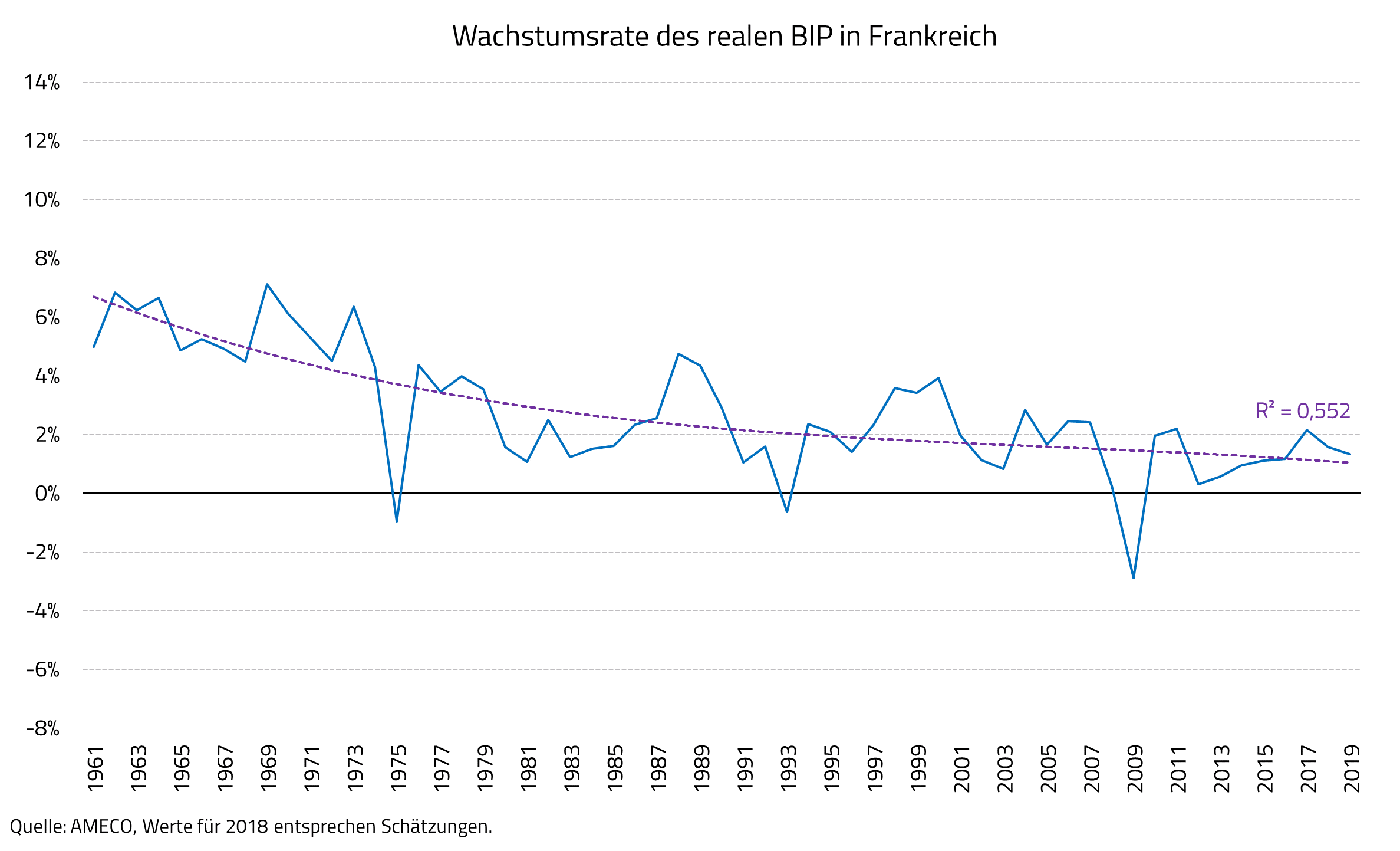 The investment ratio (total gross fixed capital formation) fell in France from 2008 to 2014 (Figure 3) and has recovered only slightly since then. It must be assumed that corporate investment has fared even worse, but unfortunately we do not have any comprehensible data on this. 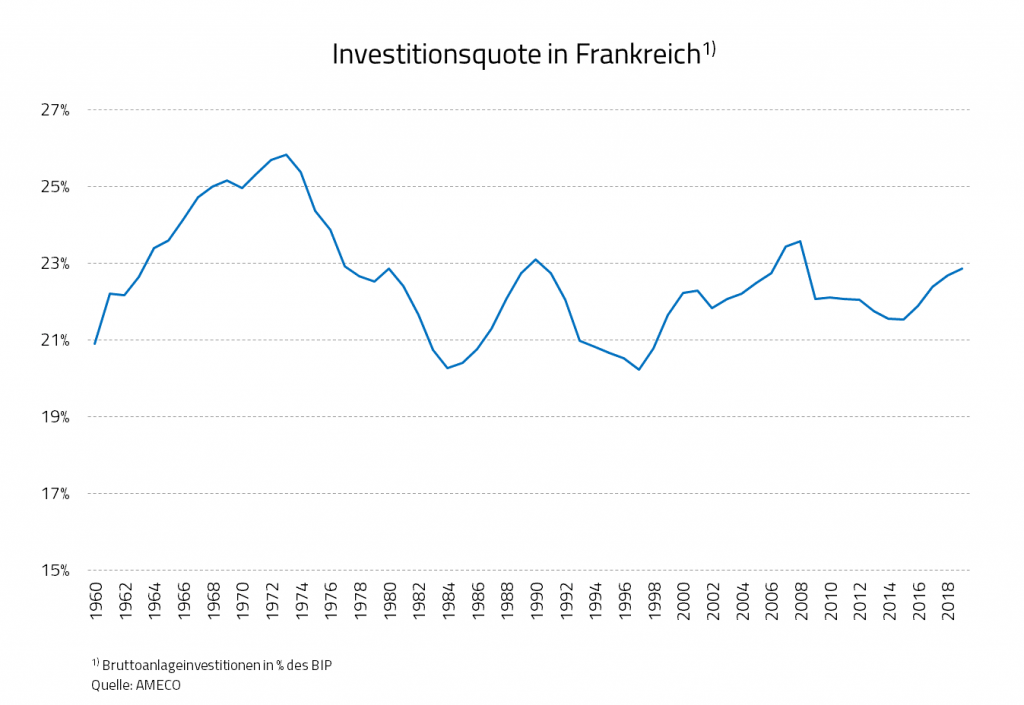 Even more than France, Italy suffers from the domination of neo-liberalism, in particular the variant that prevails in EMU. Because Italy already has a high level of debt, the absurd rules of the Stability and Growth Pact force it to practice austerity against all reason. In other words, despite a lack of private investment and debt dynamics (at zero interest rates), Italy must refrain from government stimulus. As Figure 4 shows, the result is catastrophic. 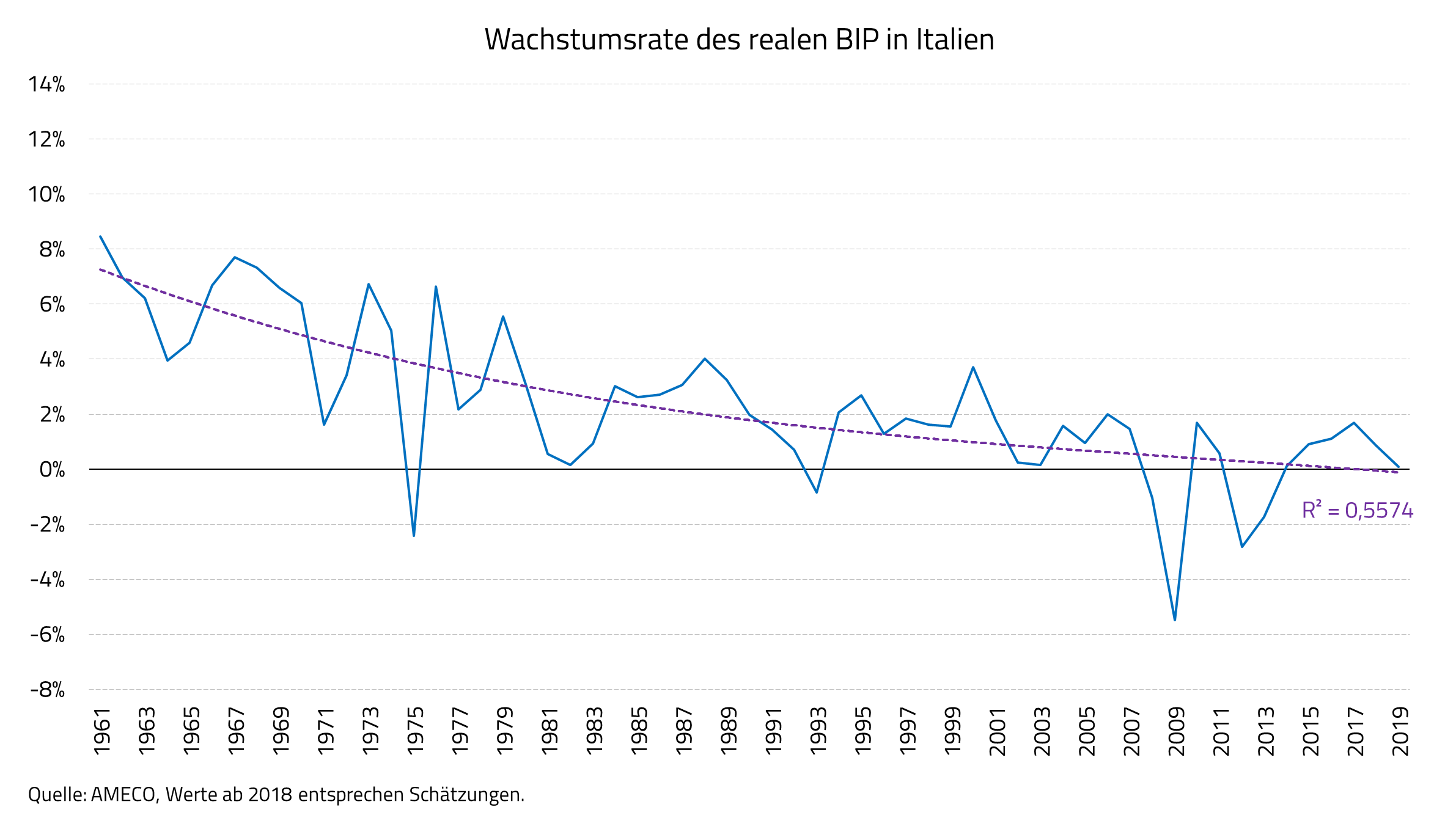 The investment rate in Italy has reached a historically low level (Figure 5). And this is in a country that in the past was characterised by dynamic investment activity, especially in the industrial sector – more than almost any other. 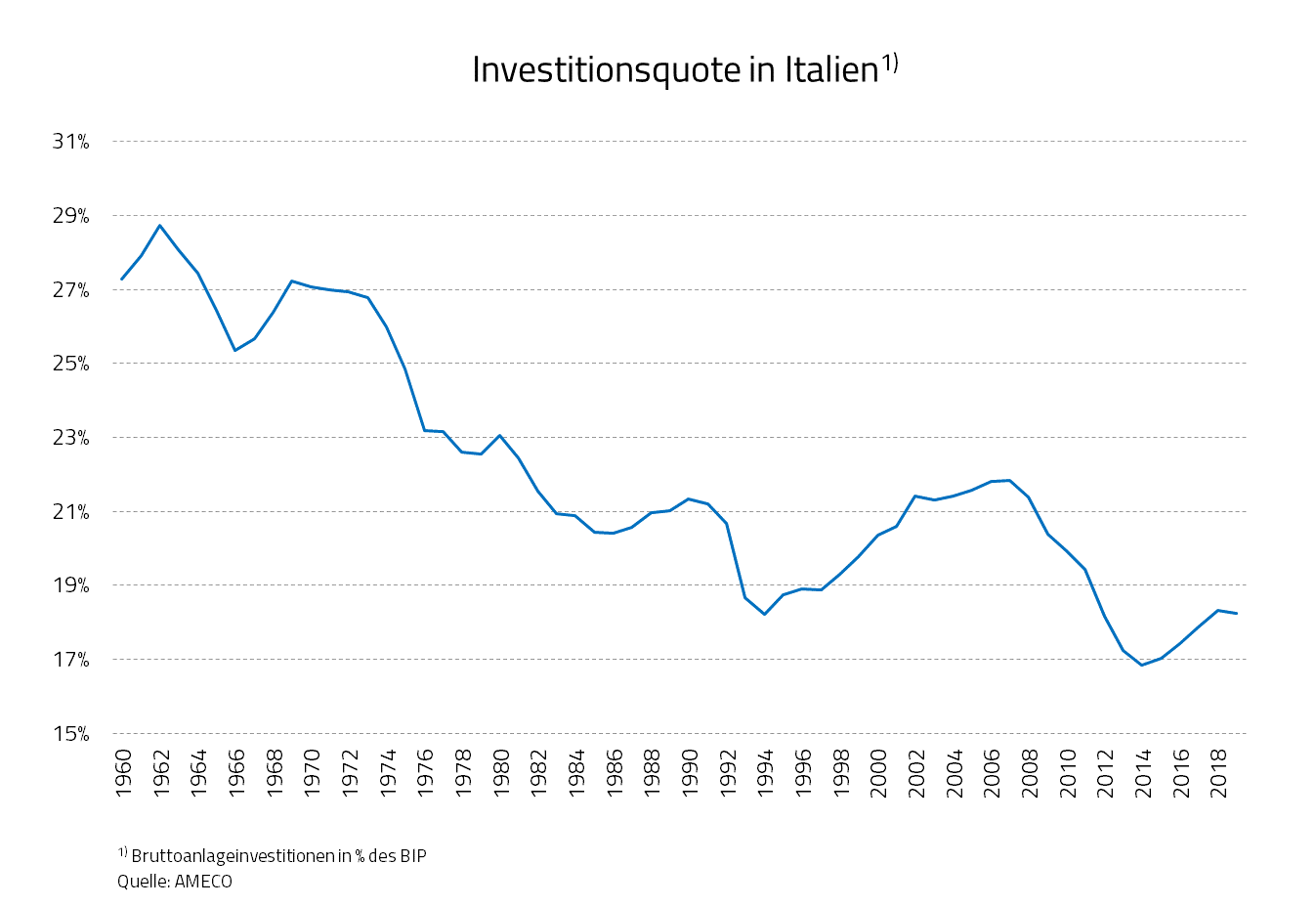 Less dramatic is the development in Spain, where the first years of EMU were accompanied by a pronounced housing construction boom, with correspondingly high GDP rates (Chart 6). However, if you take into account that recently there have been considerable doubts about the official calculation of Spain’s GDP, there is probably no better economic performance in evidence here. 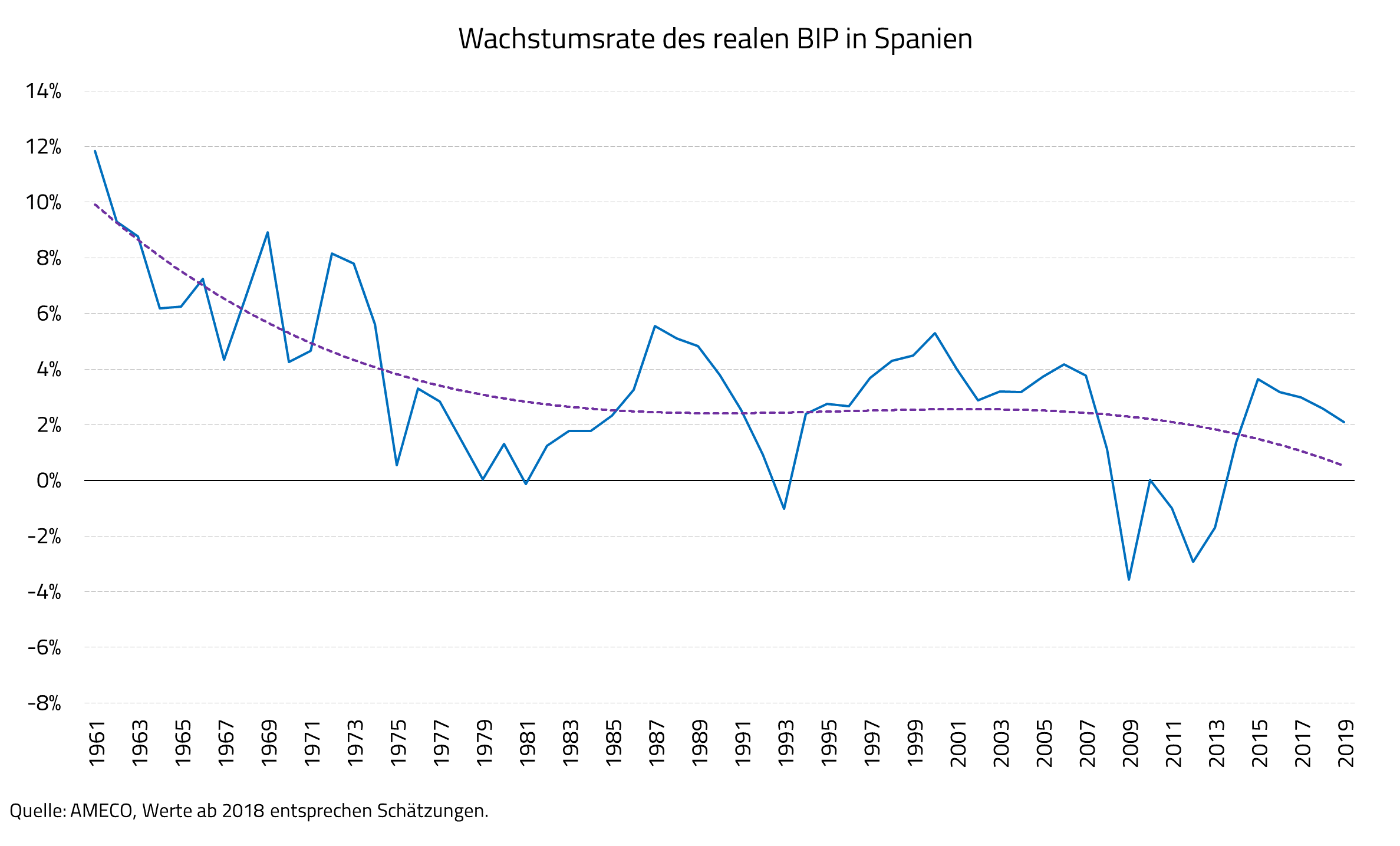 In Spain the investment rate was raised by the housing boom of the 2000s, but proved unsustainable (Figure 7). There was no real recovery after 2008/2009. 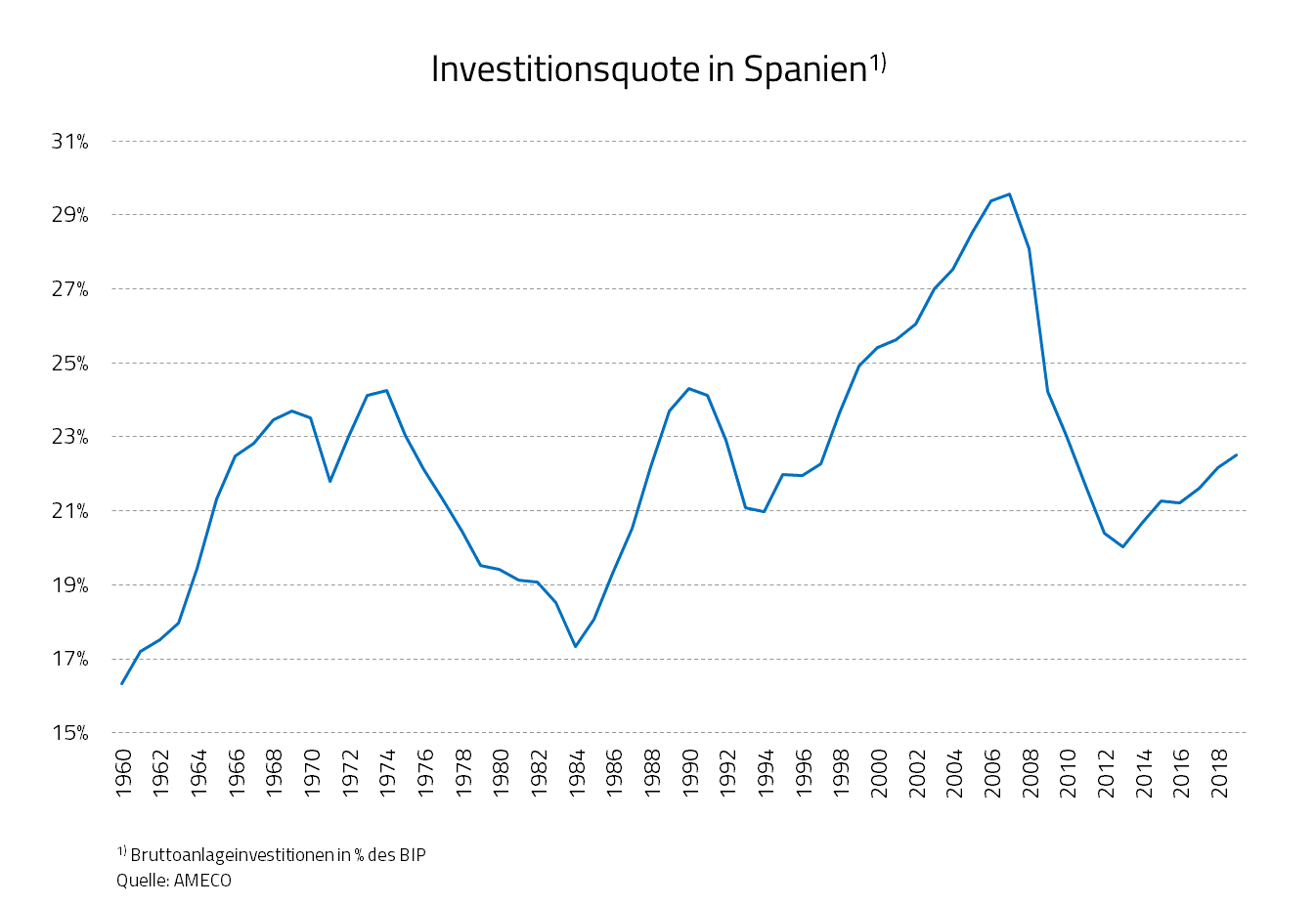 A country that falls slightly outside the above grid is Japan, where the boom lasted much longer, until the end of the 1980s. But in the end the boom was also fuelled by a grandiose and irrational real-estate bubble. Growth then collapsed and has not yet recovered (Figure 8). Growth rates of around one percent have been achieved only with the help of massive government intervention. At the same time, however, the employment situation in Japan is better than in all Western industrialised countries. 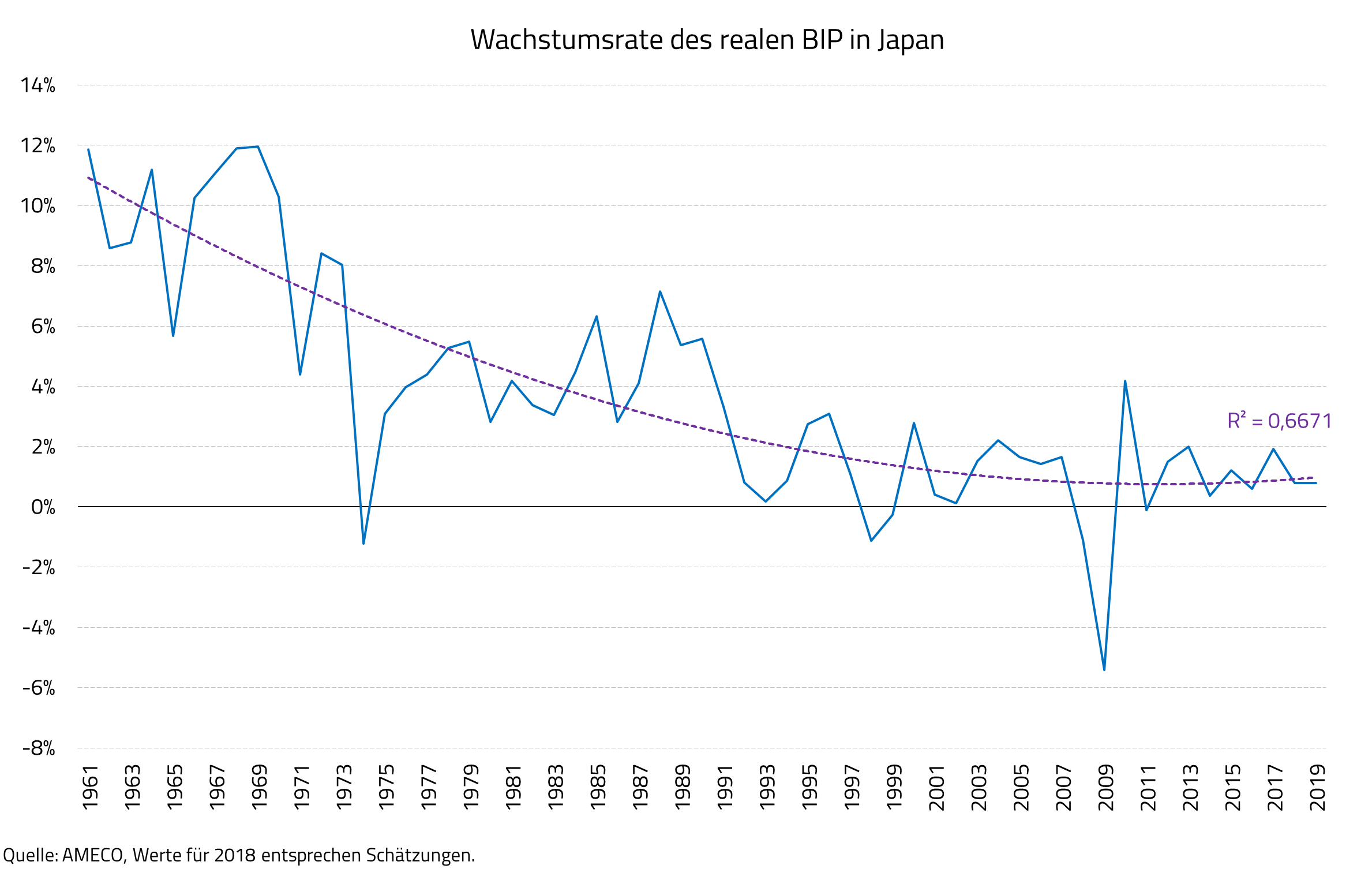 The investment rate, which had reached an enormous level of over 30 percent in the 1960s and 1980s, is now at the level of Western industrialised countries, and has barely risen since 2010 (Figure 9). 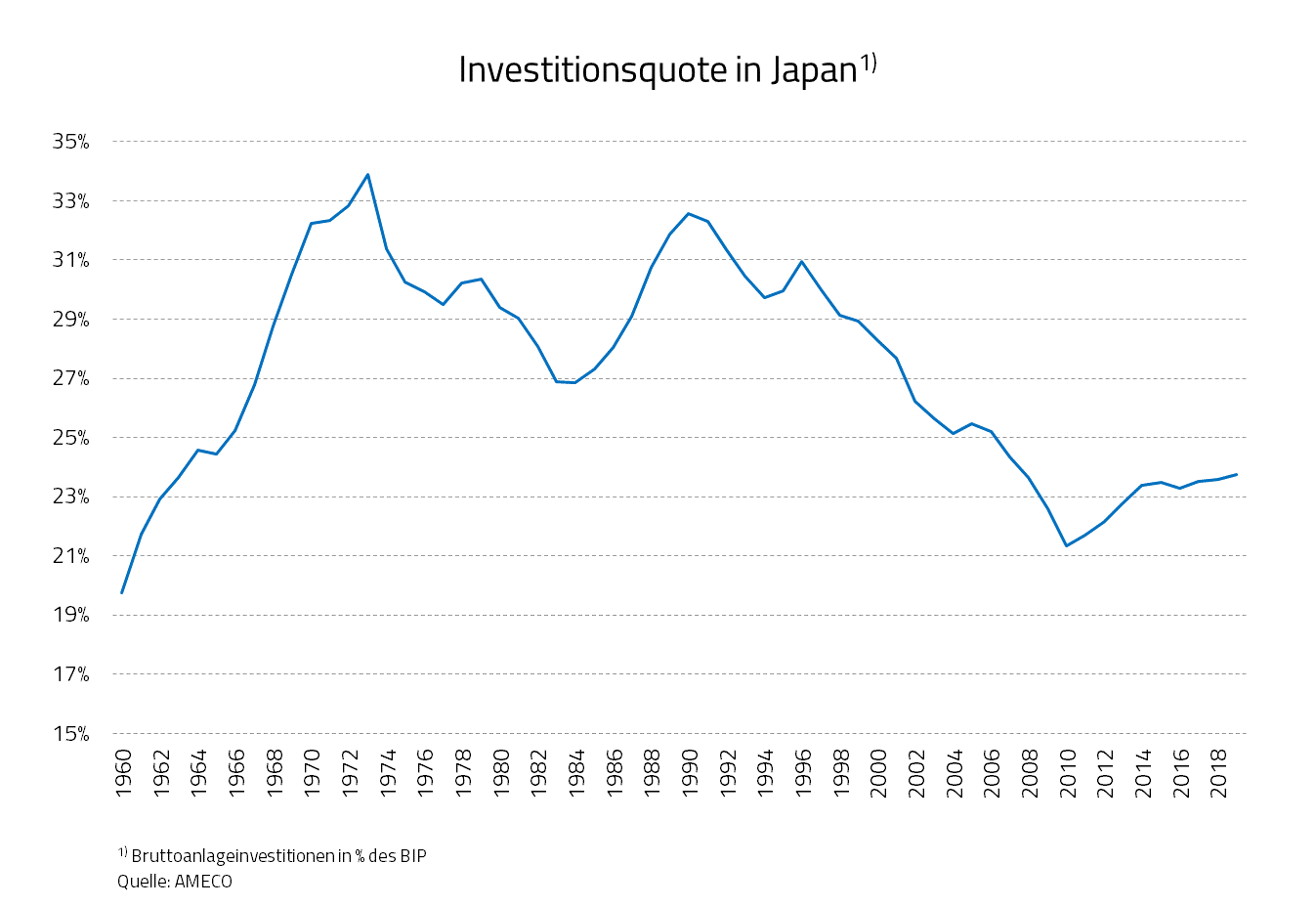 Is all this technological?

Now, many argue that the slowdown in growth is due not so much to the wrong economic policy as to a general trend of declining innovation in mature economies, from which ultimately no country can escape. This is proved, they say, by declining rates of labour productivity growth. It’s an assertion that can be made, but certainly cannot be proved.

In order to refute the argument empirically, you need to find a “black swan”, i.e. a country in which conditions have become much less bad. And indeed, that country exists. The only large country in the Western world that has been able to escape this negative trend to a considerable extent is the USA. Here, too, growth momentum has slowed, but far less than in other countries (Figure 10).

Real GDP growth in the USA 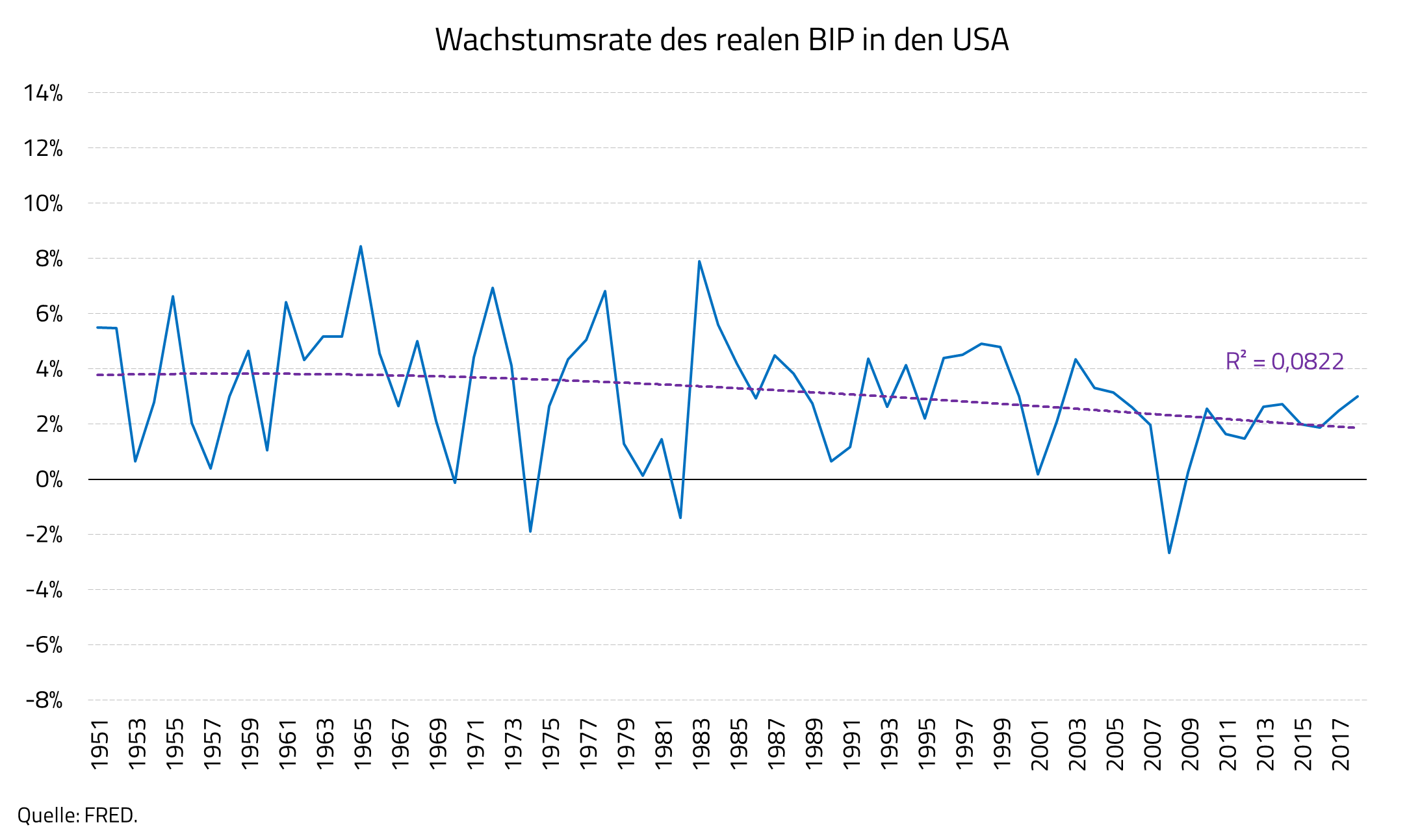 The investment ratio in the USA has tended not to fall, and has recovered enormously since 2008/2009 (Figure 11). Although the large increase in the 2000s can clearly be attributed to an irrational real-estate boom, there is no simple explanation for the recovery since then.

Investment rate in the USA 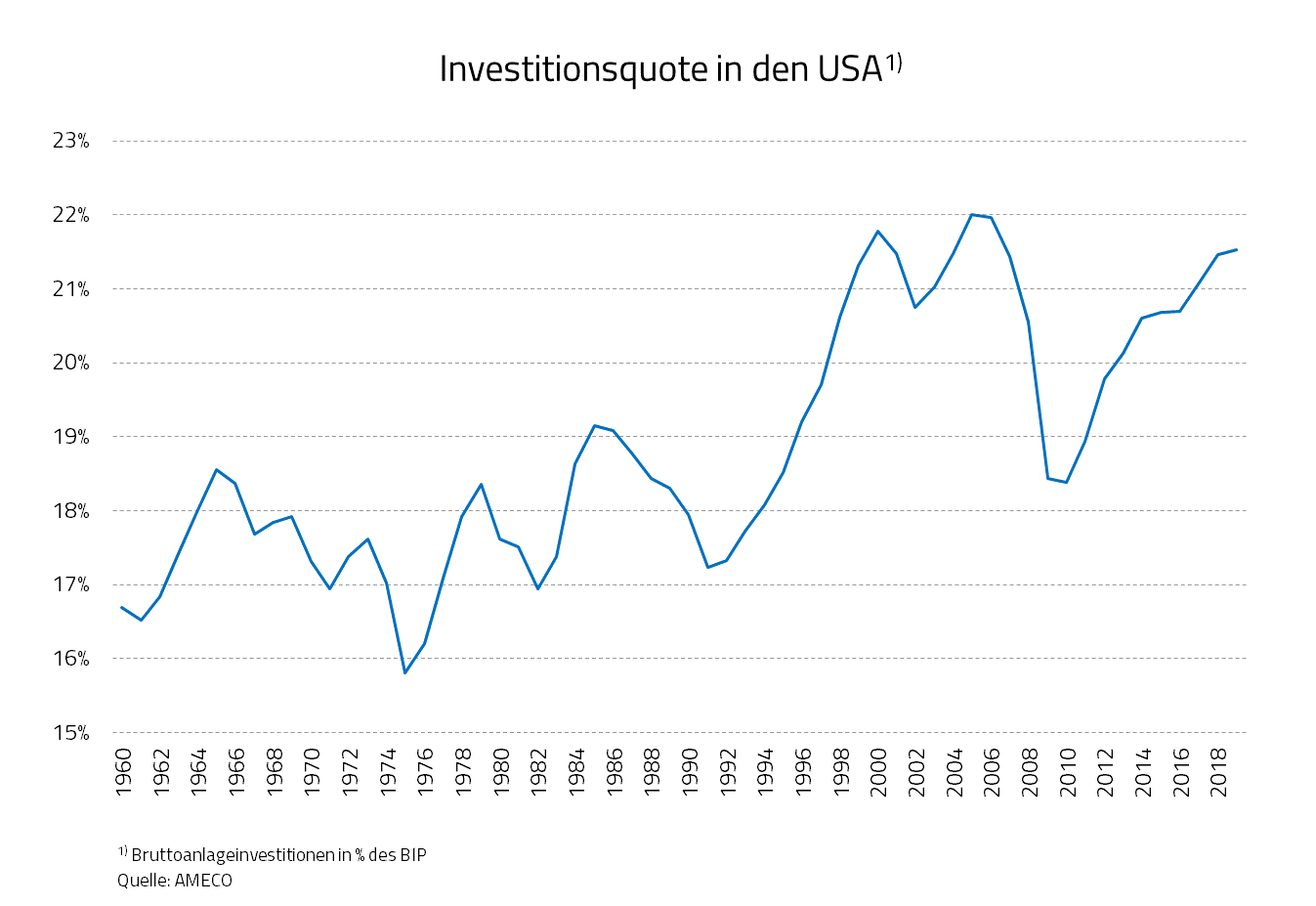 As long as private market dynamics – driven by expansive monetary policy – were sufficient, the state held back. But this phase was already over in the mid-1970s. Then, without massive government stimulus from fiscal policy, there was only one return to full employment. Only during the phase of the so-called dotcom bubble in the second half of the 1990s, was the state able to get by again without any new indebtedness of its own. At that time private households increased their spending to such an extent that on balance they became indebted year after year and did not save (see Figure 12, where the breakdown, unlike in Figure 13, includes all state indebtedness). 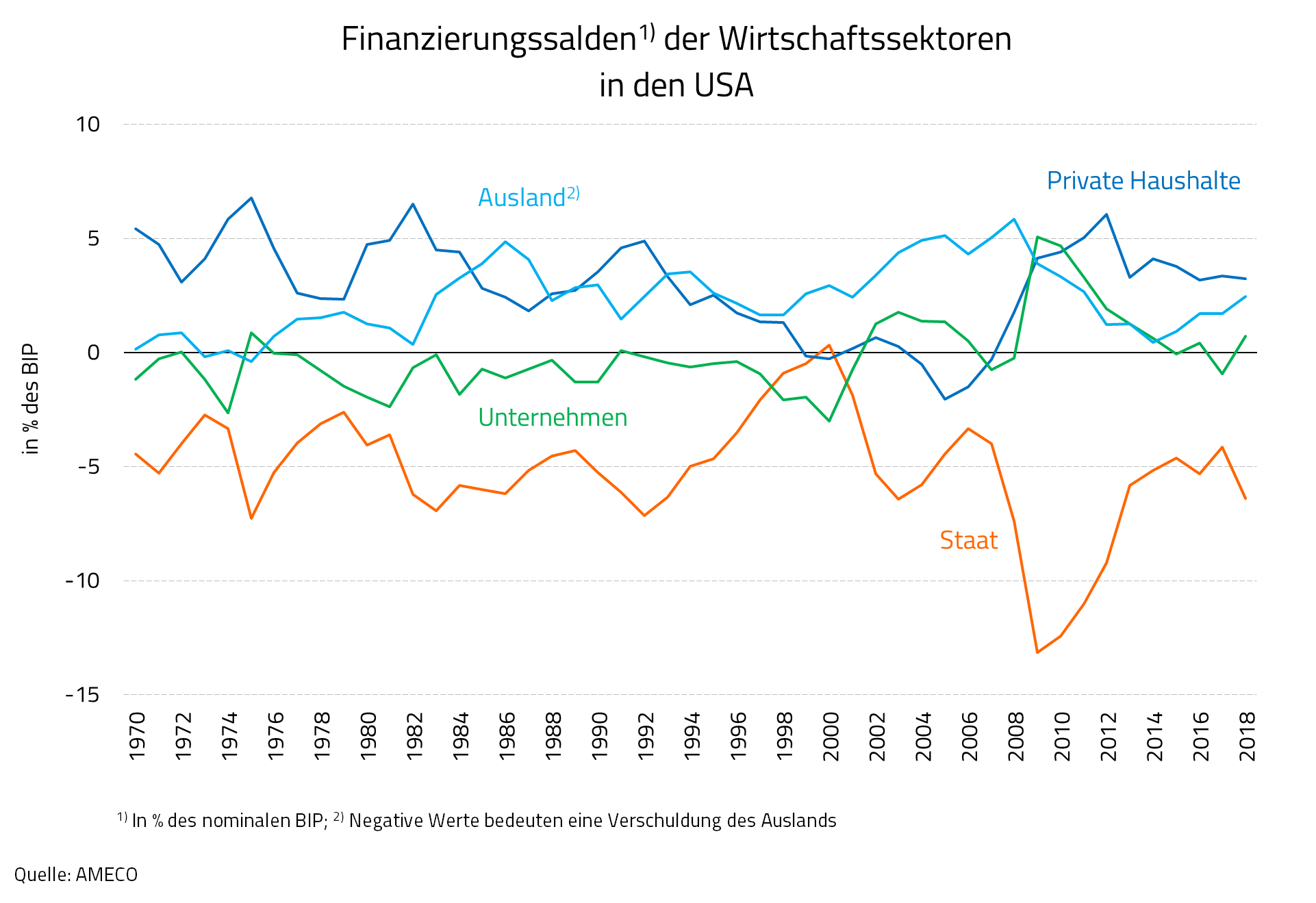 Subsequently, the companies saved again, i.e. spent less than they earned. Now, in the world’s largest market economy, there was no way for the state to rely on market forces. The gap between income and expenditure has been widening, and even now that full employment has been reached, the state is still increasing its deficit again. In the past fiscal year it was 3.9 percent of GDP or 700 billion US dollars (only for the central government). According to recent estimates, the absolute sum for this fiscal year (ending September 30th) will be in the order of $1,000 billion.

State debt and new indebtedness of the USA 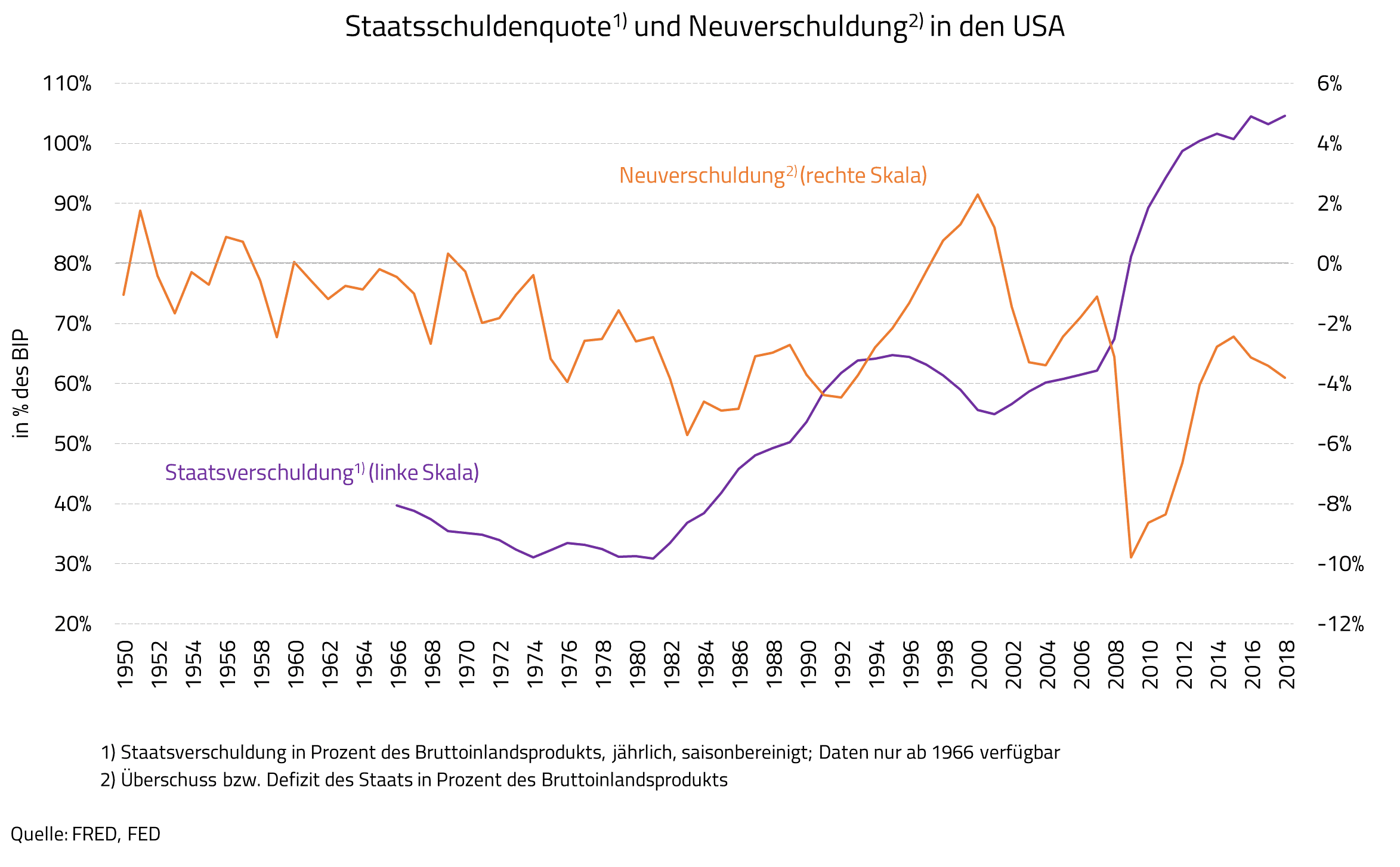 Total debt (as a percentage of GDP, which we consider an inappropriate definition) will certainly rise towards 110 percent in 2019. Contrary to what the liberals and neo-liberals believe, this is not a problem. It shows, however, that there can be no reasonable economic development without a permanently greater financial commitment on the part of the state.

In a world in which – via monetarism and neo-liberal labour market policy (“labour market flexibility”) – demand dynamics are systematically restricted, only the state can provide a remedy. Through its own aggressive demand policy, it can create a dynamic in the market economy that is sufficiently large to achieve ambitious employment goals. The United States has understood this and has developed an impressive pragmatism across both parties in terms of government debt. In Japan, too, the state has understood that companies that save and won’t invest are creating a completely new situation and are making the state directly and indispensably responsible for demand management.

The European Commission and the European Council, with their dogma of a “healthy” fiscal policy – driven largely by Germany – have left the ranks of rational governments behind. The result is persistently high unemployment. A changing of the guard at the Commission could have been an opportunity to get things moving. But even the first decision, on the election of the President of the Commission, is a step in the wrong direction. It is therefore inevitable that economic and social problems will increasingly call the entire European project into question, because the “populists” can point to the spectacular failure of economic policy.

The Yeti and the Loch Ness Monster, whose equivalents in economics are the Laffer Curve and Trickle Down. Frances Coppola  is the author of the Coppola Comment finance and economics blog, a contributor to Forbes […]

Major central banks (with the exception of Japan) are using recession to lower inflation, as if that was the only alternative Michael Roberts is an Economist in the City of London and a prolific blogger Cross-posted […]

The conflict with platform companies striving for monopolistic markets and worker exploitation is ongoing. Support the platform workers’ strikes. Thomas Klikauer teaches at the Sydney Graduate School of Management at Western Sydney University, Australia. He has […]