Capitalism is celebrated by liberals as a success story. But it was precisely the rule of liberalism that drove the market economy into a major crisis. A reflection on 70 years of post-war economy.

In the two pieces on a “world without interest” (to be found in German here and here) I have already explained why the current situation of the world economy differs so fundamentally from what for many decades was regarded as the model of the market economy. On the basis of new empirical evidence I want to deepen this in this series of articles and provide very concrete proof of what for the past 70 years we had merely suspected.

Anyone familiar with economic issues recognises the phenomenon: capitalism is an outstanding success story. To demonstrate this, one only has to compare the living conditions of today with those of 200 years ago. And indeed, one cannot seriously deny that there have been enormous successes over the past 200 years. At the same time, we know that these successes have by no means been uniform and steady, but were accompanies by enormous shocks and distortions that have repeatedly delivered blows to the system and with it to the wellbeing of working people.

The living conditions for the large mass of people in the industrialised countries have by no means improved continuously since the beginning of industrialisation. Workers had to fight hard to be allowed to participate at all in the wealth opportunities created by the capitalist market economy. A hundred years ago it was by no means certain that the progress that had been made by then would be sustainable.

It was only in the past 70 years, i.e. since the Second World War, that the participation of the masses was realised on a large scale. And that, too, applies only to the Western industrialized countries. In the developing countries, the systematic participation of the mass of workers in the fruits of production is still the exception (which can be found above all in Asia) and not the rule. Consequently, in this seemingly successful system, in addition to great absolute poverty, there are still billions of people who live from hand to mouth and can barely keep their heads above water.

It is obvious that the post-war period, especially the 20 years from 1950 to 1970, produced absolutely outstanding results in terms of income development, employment and employee participation. In Germany, this phase is often ascribed to the German economic miracle and benign German politics (under Ludwig Erhard). But this is one of the many myths which people in Germany trot out when it comes to glorifying their own achievements. The era of the Bretton Woods system was a time of great prosperity in the entire industrialized world and some countries were more successful than Germany. But the developing countries associated with the system also benefited and developed better than before and later. This means that there must have been reasons for this global success story, which went far beyond German peculiarities and the actions of people in Germany.

Nevertheless, as Figure 1 shows, the real growth rates in Germany during these years were more than impressive from today’s perspective. In the first ten years, the average growth rate of income in the economy as a whole was 8.3 percent. And even from 1961 to 1970, 4 ½ per cent was still achieved, although the first recession had occurred in 1967.

Real GDP growth in Germany in comparison to previous year 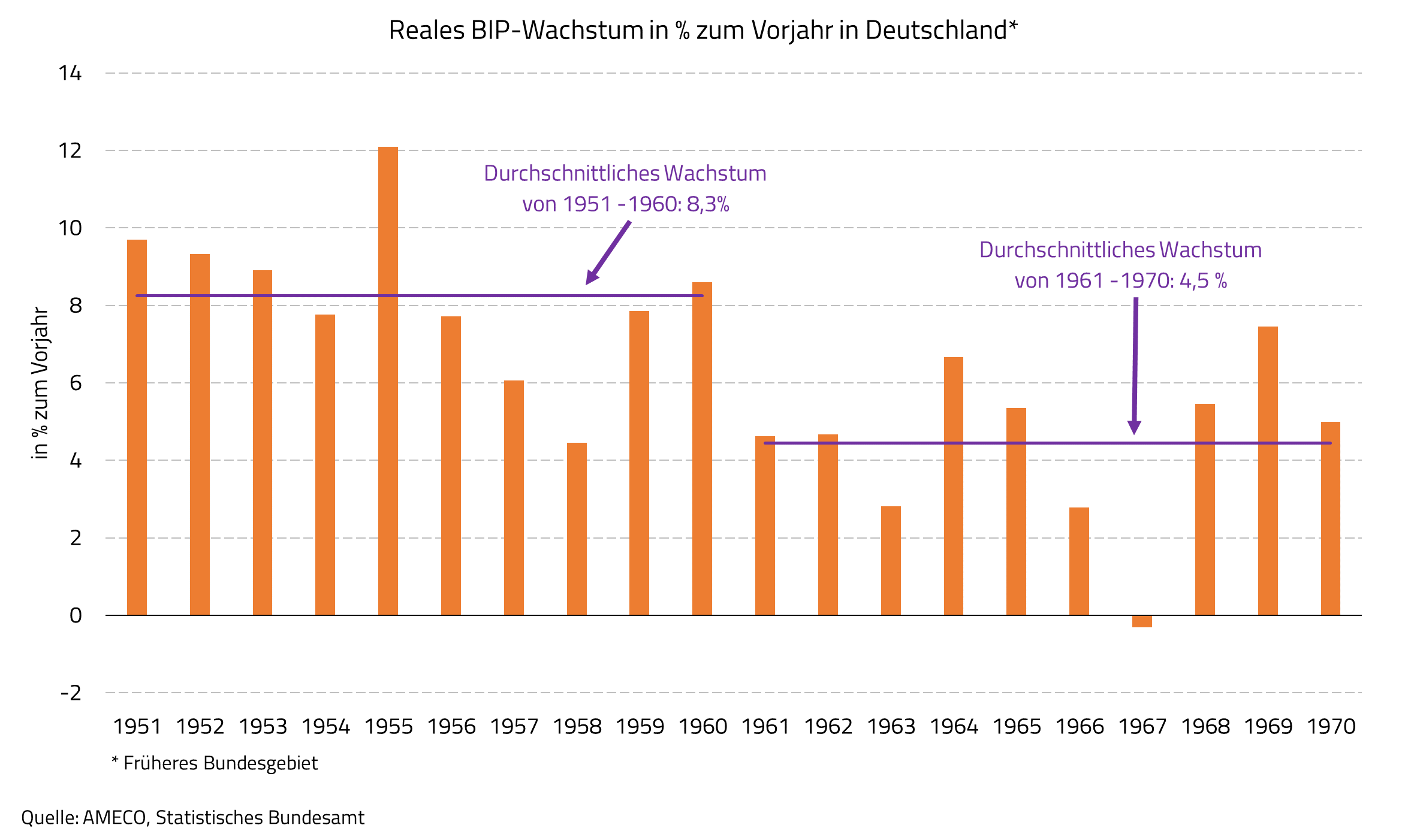 This phase is often seen as the result of a one-off effect that quickly repaired the destruction of the war and covered the population’s “catch-up” needs. But this view is completely wrong. “Catching up” and “need” are not categories that can influence and explain concrete economic development in any way.

East Germany also wanted to catch up, but had no chance, because the economic conditions were not such that the “catch-up demand” there could have been met quickly and without Western aid. In the developing countries there is an enormous need and a desire to catch up, but that does not necessarily mean that it will be fulfilled.

I will try to show that the economic conditions in the first decades after the Second World War explain this result. The basic investment conditions created by the Bretton Woods system were such that the dynamic of a market economy could develop clearly driven by entrepreneurial investment. The belief grew in Germany and it became a myth, that the successes were related to the “market-economy reforms” that Ludwig Erhard had pushed through against the spirit of the times. This is just as great an error as the belief in “catch-up demand” in the 1950s.

Even in Germany, the real growth rate has fallen steadily since the 1950s (Figure 2). Since Germany is in a relatively good position because of its competitive successes through wage dumping, it can be assumed that the situation for Europe as a whole is dramatically worse. For the USA, on the other hand, the effect is not true to the same extent, as will be seen in later articles. 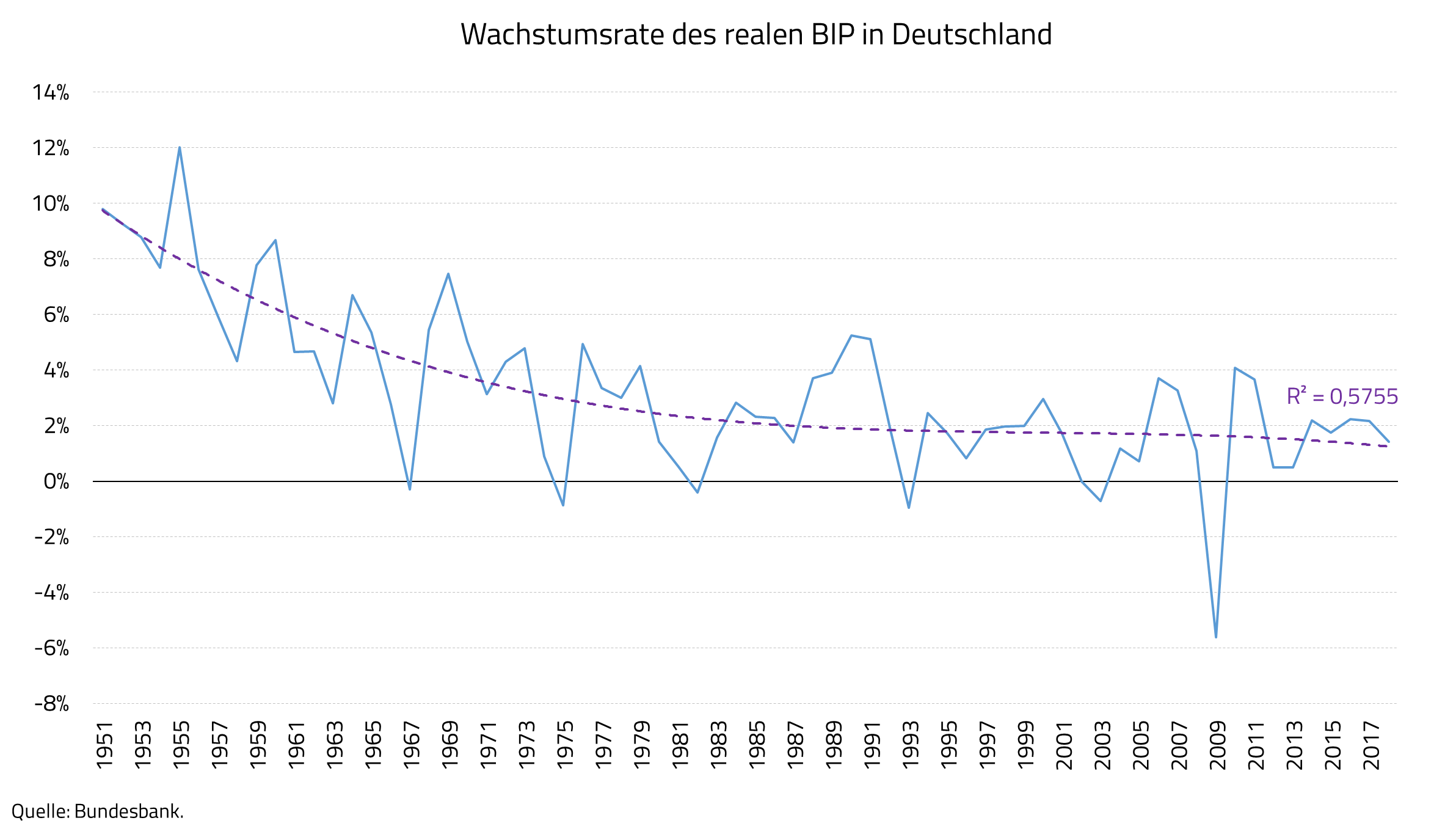 Looking at the investment activity of companies, the findings are also clear for Germany: since the 1970s things have been going downhill. Apart from a small revival at the end of the 1980s and the consequences of German reunification – which brought entrepreneurial investment to a new level (in this context, definition issues play just as important a role as the different areas covered) – one sees a slowdown over time. And this is despite the fact that since the turn of the 80s economic policy has done everything it can to stimulate and stabilise private investment. The most important keyword here is the halving of taxes for companies. 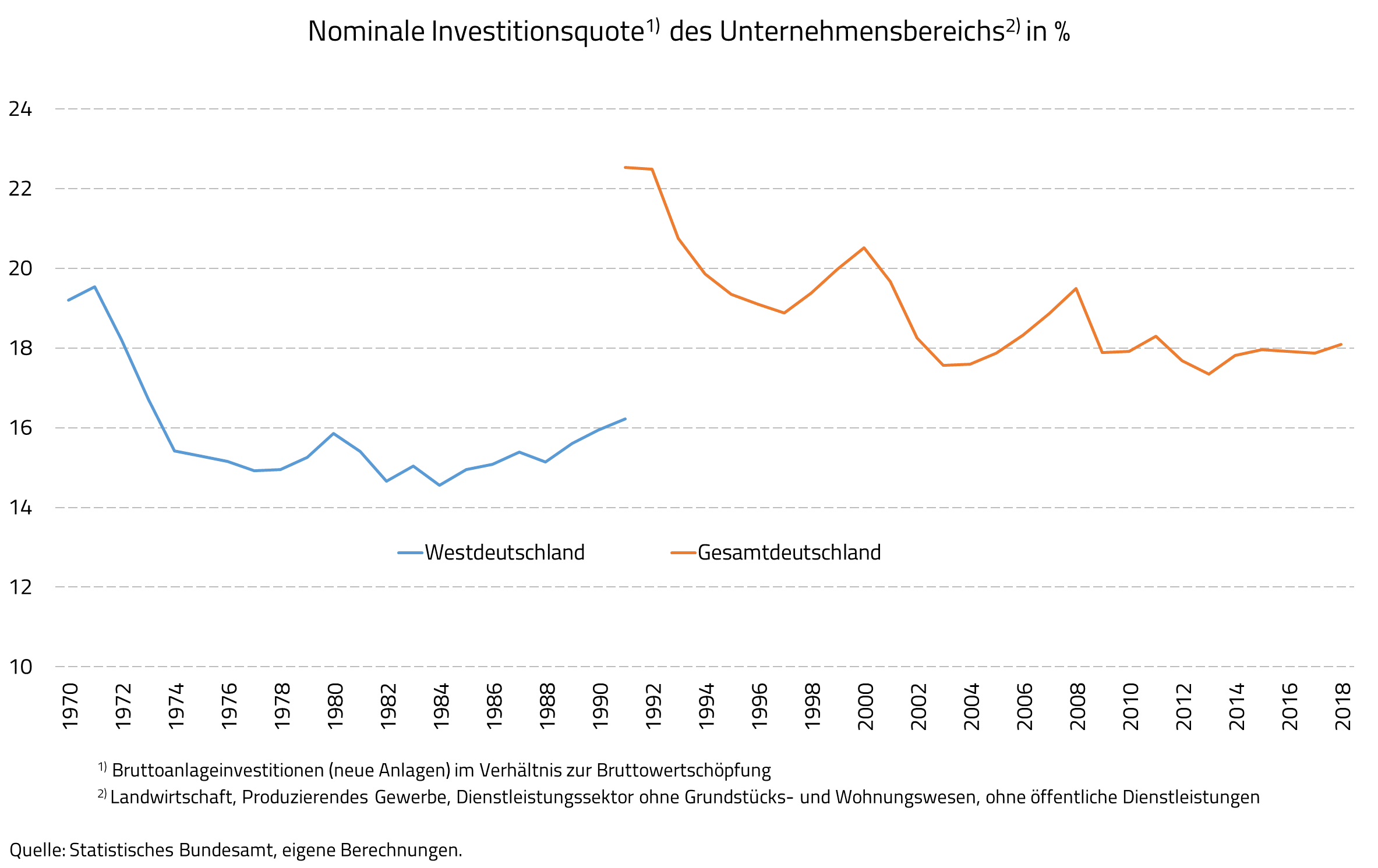 There must therefore have been conditions in the Bretton Woods system which, in retrospect, created unique conditions for private investment. These conditions, which are usually completely overlooked, were macroeconomic in nature. Institutions (“the economic order”) and functioning individual markets are one thing; favourable conditions for companies to invest are quite another. The consequences of unification in East Germany, where almost everyone believed that the former was necessary and sufficient for a successful transformation into a market economy, should have taught us that without a suitable macroeconomic environment there can be no market dynamics. But even that is simply pushed aside by the market-economy ideologues.

There is also no question that the growth momentum in the Bretton Woods system was accompanied by great momentum in the collectively negotiated wage growth rates of workers, as shown in Figure 2. From 1958 (the first year for which we found comparable figures) to 1978, there was an average annual increase of 7.9 per cent, which means that both sides were willing to go all out in collective bargaining and that employers always accepted that with such high nominal increases, workers had a good chance of achieving full participation in productivity growth with their real wages (i.e. the same increase for both sides, the employee side and the employer side).

Wage increases in collective agreements in the industrial sector 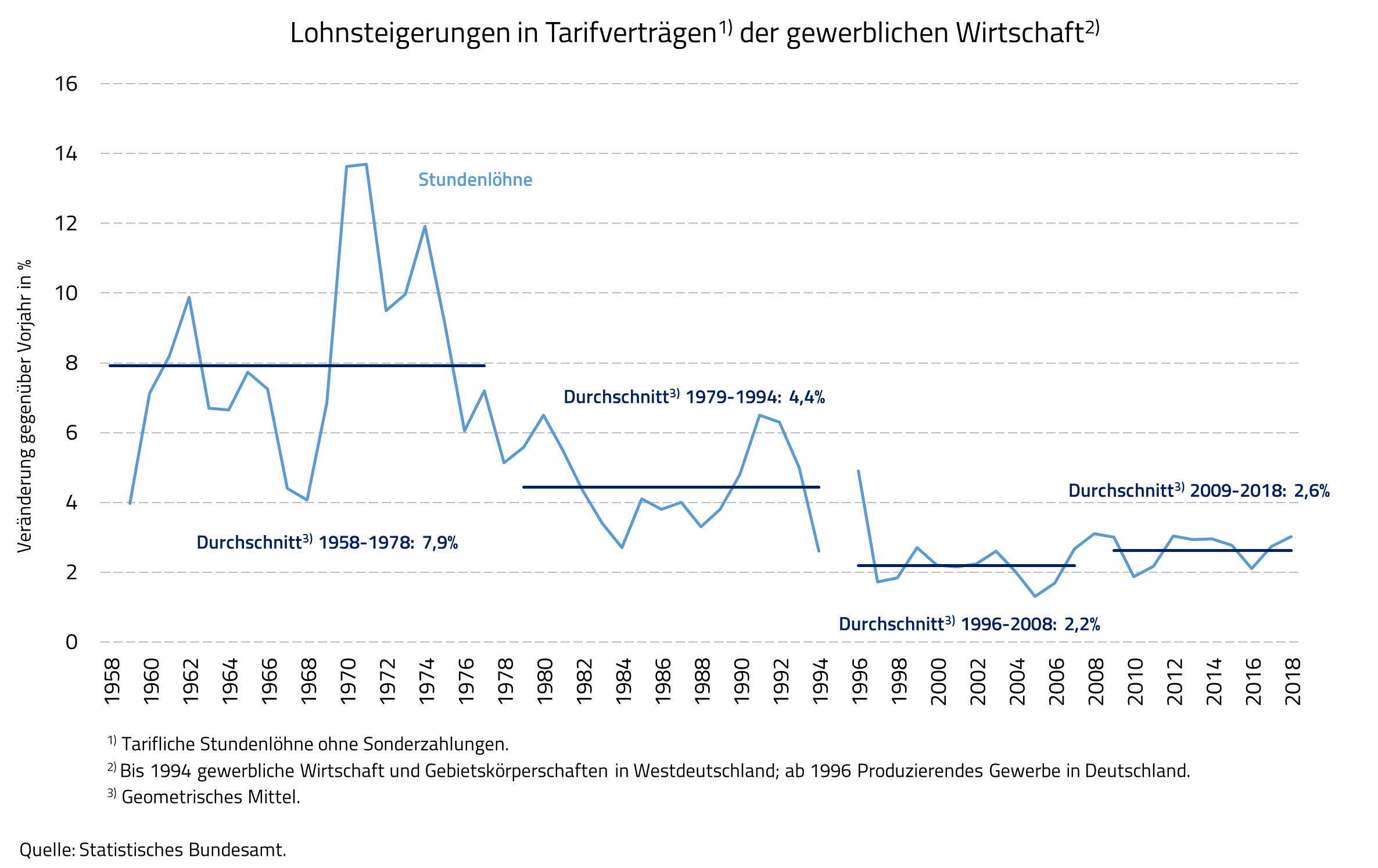 Since the beginning of the 1980s, wage increases have been going downhill, and only German unification (because of the race to catch up in East Germany) has given workers another boost. The old German model of systematic employee participation in productivity growth has been dead since the mid-1990s at the latest. Since the Red-Green takeover in 1998 and the subsequent grand coalitions, the position of the trade unions and the situation of the workers has deteriorated so much that a record negative real wage growth rate, a nominal increase of 2.2 per cent, was achieved between 1996 and 2008.

This, too, is the result of an intellectual rigidity, of dominant opinion-formers in the economy, whose great commonality was the rejection of what was then understood to be Keynesianism. Not only was Keynesianism blamed for the crises of inflation and unemployment in the wake of the oil price explosions, but it was also believed that the challenges of an increasingly integrated world economy could only be met with a fundamental renewal of the market economy, and in particular the restoration of market conditions in the labour market.

Helmut Kohl’s “intellectual and moral change” of 1982 was meant precisely in this sense. At the same time, Ronald Reagan and Maggie Thatcher set out to create a system that they (and the economists behind them such as F. A. von Hayek) saw as a true market economy. That they radically brought to an end the most successful phase of capitalism by far is the tragedy and paradox of this story.

What do these leading progressive thinkers know that you don’t?

During our Fundraiser 2021 we have posted endorsements from some of the leading progressive thinkers from across Europe and the world. Not only that, they regularly contribute their articles to BRAVE NEW EUROPE. Most of […]

Most UK buyers of off-road cars designed for rural use are urban motorists, worsening city congestion and air pollution.  Alex Kirby is a former BBC journalist and environment correspondent. He now works with universities, charities […]

Branko Milanović – Greatest Happiness for the Greatest Number. Or Not?

Something a bit different for the weekend. Branko Milanović is an economist specialised in development and inequality. His new book “Capitalism, Alone: The Future of the System That Rules the World” should be appearing in […]