Behind the judgement passed by the Spanish Supreme Court against members of the Catalan independence movement one recognises how present Franco still is in Spanish politics.

David Whyte is Professor of Socio-legal Studies and Ignasi Bernat is an Honorary Academic in the University of Liverpool’s Department of Sociology, Social Policy and Criminology

Cross-posted from University of Liverpool 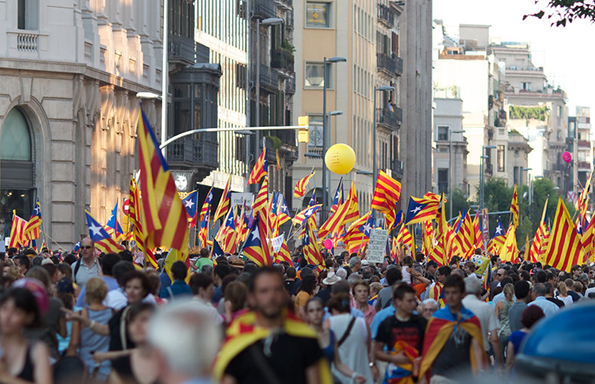 Yesterday, the Constitutional Court in Madrid handed down sentences so arcane and severe that it left even the most trenchant critics of the Spanish legal system shocked.  The convictions, of up to 13 years for organising peaceful protests and the referendum on Catalan independence on the 1st October 2017.  Those sentences are incredible not least since, as the defence lawyers in the case pointed out, no police officer is yet to come in front of the courts for the brutal violence on the day of the referendum.  This trial is stretching the boundaries of the Spanish state’s ability to face the rest of the world unashamedly, and of the rest of world’s ability to accept what is going on in Spain unashamedly.

One of the most chilling features of this trial in which 12 people were convicted of offences is that the far-right VOX party was part of the prosecution.  The legal process in Spain allows third parties to intervene in certain circumstances.  In this case the court permitted VOX to present charges and demand long prison sentences.  Of course it did not have to listen, but certainly VOX’s involvement helped set the tone for what has just happened.

The problem with the ‘justice’ system in Spain is not just that it is hopelessly corrupted by political influence.  The problem is that it is hopelessly corrupted by a political influence that, like VOX, in part claims the mantle of the Franco dictatorship.  At least 7 key witnesses, judges and legal counsel at the trial were either former supporters of the Dictatorship or have close family ties to the Franco dynasty. Those sentences demonstrate the political extremism at the heart of the Spanish justice system.

Only in the most extreme authoritarian states could we find sentences of 13 years in prison being handed down for ‘sedition’, when the seditious actions in question were non-violent and indeed mandated by a democratically elected parliament.  Sedition is the offence that was invented in the 16th century Courts of Europe, by monarchs that feared a backlash from the slow march to democracy.  Sedition is the offence in which the Crown declares that talk or actions that question the state cannot be tolerated.  In Britain, like in most European countries, the offense of sedition no longer exists.

Yet in Spain, the paranoid logic of sedition is drawing a growing number of political dissenters and protestors into the criminal justice system.  Three weeks ago, a good friend of ours, Iñaki Rivera, a Professor of Criminal Law at the University of Barcelona, was brought in front of a court in Barcelona and accused of a criminal offence.  His accusers, the Spanish Prison Officers Association, alleged that his condemnation of torture and ill-treatment in Spanish prisons was a crime because it put prison officers at risk.  His case was ordered to be heard in court in the coming weeks.  Iñaki Rivera is the coordinator of a project that monitors human rights in prisons.  In other words, he was accused of a crime just for doing his job as a human rights monitor.  This is the type of accusation that we might expect academics to face only in the most authoritarian of regimes.

Iñaki is by no means the only one to experience this Kafkaesque logic in which the state is so intolerant of criticism that criticism of the state becomes a crime itself.

We reported last February a growing trend in courts summons being issues to those who have spoken publicly about police violence in Catalonia.  The charges? ‘Hate crimes against the police!’  And an increasing number of comedians, artists and singers have been sentenced to imprisonment in recent years for ‘offences against the Crown’.  In the same week our friend Iñaki was summonsed to court, 9 non-violent pro-independence activists were arrested in a Guardia Civil raid and accused of terrorism.

Crucially, the paranoid logic of sedition is not just a Catalan issue.  But it reflects a particularly brittle moment in Spanish national unity.  Three weeks ago, 47 lawyers, doctors, psychologists and left political activists from the Basque Country were forced into a plea bargain that saw 20 year sentences for terrorism reduced to two years.  They had been accused of membership of Eta, yet all of the activities they were accused of came after the ceasefire of 2011. Some of those convicted were lawyers who had been arrested while defending their clients in court.  ‘Hate crimes against the police’ have become more and more common in the rest of Spain.   As has the use of ‘terrorist’ charges against political opponents.

It is difficult to keep track of numbers, but some campaigners have counted those cases. In 2017, the year of the Catalan referendum, there were 48 people around the world who were charged for artistic expression that the state deemed to be dangerous.  The most punitive was Spain, with a total of 13 artists sentenced to prison.  Now Spain is ostensibly not a totalitarian regime, but in 2017 it saw more artists than China, Iran, Egypt and Turkey sentenced to jail sentences.  And apparently artists are making the authorities even more nervous these days.  This summer, the rapper Valtonyc who is currently in exile in Brussels to escape a jail sentence for rapping against the king, reported that there are another 16 Spanish rappers currently facing the threat of jail for their lyrics.

Spain’s justice system is twitching with deeply political reflexes that increasingly resemble the spitting, clawing and hissing of a wounded and cornered cat.  The problem is that Spain is a wounded cat that still has a politicised legal establishment on its side.  It is a legal establishment that never completely severed the political and judicial branches of the state after the Franco years.  And it is paying the price now for a partial transition to democracy.  This is why the judicial extremism that never left the Spanish justice system is now baring its claws.

Until now the EU, led by Germany, has had an embarrassing policy of appeasement towards Trump’s trade policies in an effort to protect German car exports. Richard D. Wolff is professor of economics emeritus at […]

The gap between the United states and the Eurozone a decade after the financial crisis Antonio Lettieri is Editor of Insight and President of CISS – Center for International Social Studies (Roma). He was National […]

An Open Letter to the World Bank concerning Public-Private Partnerships

In an open letter to World Bank directors, 34 organisations, networks, and trade union confederations oppose World Bank support for Public-Private Partnerships To: European World Bank Executive Directors Re: Follow up to the 2019 Annual […]