Jason Hickel is an academic at the University of London and a Fellow of the Royal Society of Arts. His book “The Divide: A Brief Guide to Global Inequality and its Solutions,” was published by Penguin in May 2017. This was followed in 2020 by “Less Is More: How Degrowth Will Save The World” (William Heinemann) 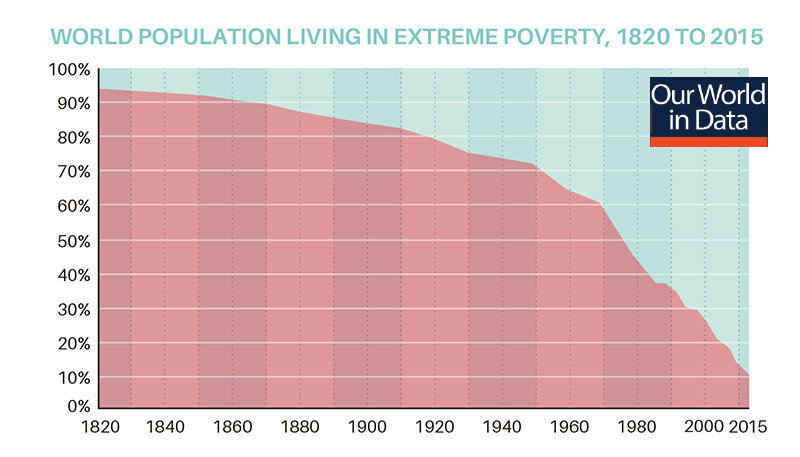 Over the past few years, this graph has become a sensation.  Developed by Our World In Data and promoted widely by Bill Gates and Steven Pinker, the graph gives the impression that virtually all of humanity was in “extreme poverty” as of 1820 (i.e., living on less than $1.90 per day, PPP; less than is required for basic food). OWID has used this figure to claim that extreme poverty was the natural or baseline condition of humanity, extending far back into the past: “in the thousands of years before the beginning of the industrial era, the vast majority of the world population lived in conditions that we would call extreme poverty today.”  In other words, virtually all of humanity, for all of history, was destitute until the 19th century, when at last colonialism and capitalism came to the rescue.

There’s only one problem: the graph’s long-term trend is empirically baseless.  For the period 1981 to the present, it uses World Bank survey data on household consumption.  This is a legitimate method for assessing poverty. For the period prior to 1981, however, the graph relies on GDP estimates from Bourguignon and Morrison.  The problem is that GDP data cannot legitimately be used to tell us about poverty, because it is not an indicator of livelihoods or provisioning; rather, it is an indicator of commodity production.  Unlike the World Bank data, it does not count non-commodity forms of household consumption (subsistence, commons, mutuality, etc.), which was the dominant form of provisioning for most of history.  This is important, because we know that the colonial period was characterized by the destruction of subsistence economies, the enclosure of commons, forced dispossession and mass enslavement, all of which significantly constrained people’s access to livelihoods and provisions.  In other words, colonialism caused poverty to worsen even in cases where GDP was rising.  This violent history gets obscured by the OWID graph, and repackaged as a happy story of progress.  (For more on this critique, see here, here, and here).

This critique was articulated recently by Robert Allen in an article published in Annual Review of Economics.  In it, he affirms that the GDP data cannot be used to assess poverty, and argues that the matter of long-term trends can only be settled with historical consumption data.  Toward this end, he constructs a basic needs poverty line that’s roughly equivalent to the World Bank’s $1.90 line, and calculates the share of people below it for three key regions: the US, UK and India.

His findings reveal a much different story than the OWID graph would have us believe.

First, Allen demonstrates that using the Bourguignon/Morrison data leads to a significant overestimation of poverty in the 19th century, specifically in the case of rich countries.  For instance, using the B/M data, OWID indicates that about 40% of the US population lived in extreme poverty in 1820.  By contrast, Allen indicates that the accurate figure is closer to 0%.  This is not to say that people weren’t poor by today’s standards, but rather that very few were living in “extreme” poverty, i.e., on less than what $1.90 can buy in the US today. That’s what is at stake here.

The same is true for the UK.  Even during the height of the feudal period, in 1290, extreme poverty in the UK reached no higher than 20-30%.  Welfare ratios suggest that things improved from 1350-1500, during the revolutionary post-feudal era, and then worsened again with enclosure after 1500, a period characterized by mass dispossession and a collapse in wages.  Living standards for workers began to recover from a nadir in the middle of the 1600s, so that by 1688 the extreme poverty rate was around 5-10%, according to Allen.  By the 1800s, extreme poverty in the UK was eliminated, due in large part to the early welfare system.

This data from the US and UK conflicts markedly with OWID’s claim that “in most rich countries the majority of the population lived in extreme deprivation only a few generations ago.”

Allen’s findings about the comparatively low extreme poverty rates in the UK in the pre-1820 era raise an interesting question.  A number of economic historians have pointed out that welfare ratios in 18th century Asia were generally on par with those of Europe, and in many cases were even higher (Pomeranz 2000; Parthasarathi 1998; Sivramkrishna 2009; Wong 1997).  If this is true, then what does it mean for historical poverty trends in Asia?

World Bank data demonstrates that around 50-60% of the Asian population was living in extreme poverty in 1981.  OWID’s narrative implies that prior to this period – indeed, apparently for all of recorded history – the rate was even higher than this, with virtually everyone in extreme poverty.  In other words, OWID would have us believe that Asia, home to the world’s most advanced historical civilizations, has always been extremely poor, unable to meet even the most basic food needs, until they were rescued by imperial intervention and capitalist globalization.  Is it true?  Or is the 60% rate in fact a modern phenomenon?  As Allen puts it, is this level of poverty “a recent development in world history?”

In other words, the high rates of extreme poverty that we see in Asia in the 1980s are a modern phenomenon – “a development of the colonial era,” Allen writes; “Many factors may have been involved, but imperialism and globalization must have played leading roles.”  Allen’s findings indicate that, as a result of colonialism, extreme poverty in 20th century Asia was significantly worse than under 13th century feudalism.  Progress, it would appear, is not a one-way street.

Of course, Allen has only examined data from three regions.  He calls for further research on this question, and such research is already underway. But if these findings are anything to go by, we need to reevaluate the dominant narrative about long-term poverty trends.  The notion that extreme poverty is the baseline state of humanity falls apart, and it becomes clear that the story is more complicated.  In general terms, extreme poverty likely increased during periods of enclosure and colonization (after all, we know that imperial interventions caused near total demographic collapse in Latin America, serial famines that killed up to 70 million people in India, a collapse of wages in China, etc.), before finally declining with the rise of labour movements, democracy and decolonization.  Indeed, this is indicated by existing data on welfare ratios in Europe and Asia.

There’s a final observation from Allen’s paper that’s worth pointing out.  Allen finds that the $1.90/day (PPP) line is lower than the level of consumption of enslaved people in the United States in the 19th century.  In other words, the poverty threshold the World Bank uses, and which underpins the progress narrative, is below the level of enslavement.  It is striking that anyone would accept this as a reasonable benchmark for “progress” in a civilized society.

This may not be Europe, but to follow attempts at organisation in the gig economy, we thought we would make an exception. In the fight for unionisation within a precarious gig economy, Toronto Foodora couriers […]