The situation will become totally chaotic if, from an economic point of view, there is not a radical 180 degree change of course 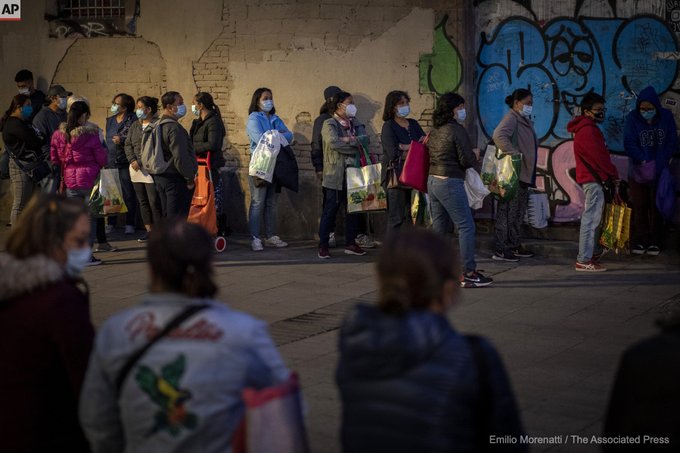 Residents queue up to receive donated food in Barcelona

Western Europe and the United States – lose. Asia: China, Korea, and Japan – win. Our way of life is incompatible with the fight against COVID-19. This is already evident. We have been transformed into selfish, childish, capricious, corrupt, unequal, unjust societies, with a right to everything, but where the common good and good living are conspicuous by their absence. My fellow countryman Góngora (Luis de Góngora y Argote was a Spanish Baroque lyric poet) used to paraphrase it: ” Laugh all you want. I’ll be laughing all the way to the bank.”. This is the degradation of democracies which, under the excuse of freedom, simply reward spoiled extractive elites who never stop sucking the blood, sweat and tears of the majority of citizens. If someone talks about freedom above all, forgetting about brotherhood and equality, you know that he represents those extractive elites, he is part of them.

There are no longer any mechanisms of solidarity, or stabilizers to protect those who today fill the hunger queues of our cities, of support for those brilliant small and medium enterprises (SMEs) on the verge of disappearing because of an element exogenous to them. It is called Inverted Totalitarianism. I have already written about it ad nauseam. If we do not recover the brotherhood and equality of the French Revolution we will end up in a very bad way. In the face of this, the civility of Asia, has defeated the virus in this hard battle.

However, the situation will turn into total chaos if there is not a radical, 180-degree change of course from the economic point of view. Yes, I declare myself radical, Frank Delano Roosevelt style, Clement Attlee style, the dummies of the greatest period of prosperity in the United States and the United Kingdom. Today families are seeing their incomes dwindle, many of them more impoverished than ever, with the need to join hunger queues. Add to this the fact that thousands of SMEs will disappear if nothing is done, and so far very little has been done. But we cannot blame the virus. The problem is one of the structure of society, and COVID has simply brought to light the miseries of the architecture designed behind the scenes on the fringes of our society. Even here we have some examples which, imbued with hollow verbiage, confuse cause and effect. Isabel Díaz Ayuso ((the President of Madrid Region) and her misgovernment are a good example. It is the deterioration of public health, as a consequence of her negligence, which ends up sinking the economy.

Already in the first wave we detailed a two-phase plan to deal with Covid-19. But let me be very clear, virtually nothing has been done in Spain except for the ERTE furloughing scheme. In 2008 it could have been very simple to tackle the Great Recession: a reordering of the banking system at the expense of its creditors, via bad banks, with debt relief for families and businesses – see Delano Roosvelt’s experiences in the Great Depression and the Swedish experience of 1992. This was not done because class interests were defended. Now the same thing is happening. It is possible to deal with the pandemic, but this requires a radical change of paradigm and model.

The fight against Covid-19 requires two distinct phases of economic policy. In the first phase, during the confinement, governments should intervene with a massive fiscal stimulus to ensure that citizens could afford the basics – food, housing, medical care,… – and that business failures, in turn, were kept to a minimum. This can only be done through the direct monetisation of coronavirus spending by applying Modern Monetary Theory; or by making full use of the ECB’s proposal, the Pandemic Emergency Procurement Programme of 1,350 billion, without conditions.

In the second phase, at the moment when confinement ends and the economy thaws, a change of economic paradigm should be adopted to address the underlying causes of the current fragility resulting from the excessive financialisation of the economy. It was necessary to implement a brutal reactivation plan, not the minuscule one proposed by Europe; and to attack the causes of financialisation and its perverse consequences. These are reflected in perverse business behaviour, that of the large corporations, where their main activity becomes the repurchase of shares, distribution of dividends, lavish remuneration for a mediocre board of directors, but where investment in capital and human training is generally conspicuous by its absence. Many of these corporations are mega-indebted and will go bankrupt. Meanwhile, families will also fall into over-indebtedness around the various bubbles that this troop is creating.

The Minsky climate and financial moments as things stand is unstoppable. A massive Green New Deal (Modern Monetary Theory with its instrument Guaranteed Work) must be implemented, so or so. But nothing has been done. The financial fragility of the West, and especially of Spain, is extreme and it will be necessary to extend Hyman Minsky’s hypothesis of financial instability to include the process of restructuring the assets and liabilities of families and SMEs as detailed in my previous blog. We are facing the second wave of the pandemic and we have a second chance to change the future of our societies. Let’s grasp the opportunity. This alternative is being ignored, the current neo-neoliberal one will lead us into absolute chaos.

Journalist Laura Olías tells the stories of Javier, Carolina and Luis, platform workers who have suffered different types of exploitation at the hands of Facebook, Amazon and Uber respectively. Originally published on ElDiario.es. The Gig […]

Branko Milanović – Greatest Happiness for the Greatest Number. Or Not?

Something a bit different for the weekend. Branko Milanović is an economist specialised in development and inequality. His new book “Capitalism, Alone: The Future of the System That Rules the World” should be appearing in […]

Charline Sempéré – Covid-19: how the health crisis is exposing the omnipresence and mundanity of unfree labour in our economies

The exploitation of workers is nothing new, yet how might we challenge this exploitation? The recent Covid pandemic highlights how essential workers are to our well-being and reproduction. We should therefore rethink the value we […]