Every critical political thinker knew this was the course a Macron government would follow. Let us hope that Marie Le Pen´s claim that the Macron administration was the last stage before her own victory was wrong. This may be bad news for the EU political elite, but not for the international corporations and finance institutes who see democracy as an inconvenience that interferes with their business. Not to forget are the “Ooooh EU´s” and reactionary liberals, who will effortlessly morph into fascism. It was interesting to read the first comments on Twitter that should a second Brexit referendum be called and the Leavers should appear in yellow vests in London the army should be called out. We have been here before. 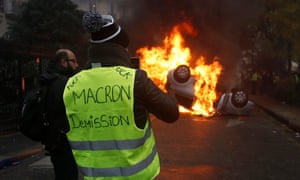 Unfortunately food banks are the new normal and not only in the UK. In most of the EU you will find food banks or the equivalent run by the Red Cross and other humanitarian organisations. […]

A bipartisan bill that would create a trade-balancing exchange rate for the dollar also aims to reduce foreign purchases of certain U.S. assets. Read here