In her unsuccesful general election campaign of 2017 Theresa May promised “strong and stable” leadership. Look what Britain got. The same was promised with the euro. What the euro-nations got was German ideological obsession for rules over reality.

When the euro was created twenty years ago, it was celebrated with fireworks at the European Central Bank headquarters in Frankfurt. Today we know better. There are no reasons to celebrate the 20-year anniversary. On the contrary. 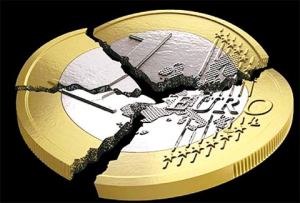 Already since its start, the euro has been in crisis. And the crisis is far from over. The tough austerity measures imposed in the eurozone has made economy after economy contract. And it has not only made things worse in the periphery countries, but also in countries like France and Germany. Alarming facts that should be taken seriously.

Europe may face a future with growing economic disparities where we will have​ to confront increasing hostility between nations and peoples. What we’ve seen lately in France shows that the protests against technocratic attempts to undermine democracy may go extremely violent.

The problems — created to a large extent by the euro — may not only endanger our economies, but also our democracy itself. How much whipping can democracy take? How many more are going to get seriously hurt and ruined before we end this madness and scrap the euro?

The euro has taken away the possibility for national governments to manage their economies in a meaningful way — and in country after country, the people have had to pay the true costs of its concomitant misguided austerity policies.

The unfolding of the repeated economic crises in euroland during the last decade has shown beyond any doubts that the euro is not only an economic project but just as much a political one. What the neoliberal revolution during the 1980s and 1990s didn’t manage to accomplish, the euro shall now force on us.

But do the peoples of Europe really want to deprive themselves of economic autonomy, enforce lower wages and slash social welfare at the slightest sign of economic distress? Are​ increasing income inequality and a federal überstate really the stuff that our dreams are made of? I doubt it.

History ought to act as a deterrent. During the 1930s our economies didn’t come out of the depression until the folly of that time — the gold standard — was thrown on the dustbin of history. The euro will hopefully soon join it.

Economists have a tendency to get enthralled by their theories and models and forget that behind the figures and abstractions there is a real world with real people. Real people that have to pay dearly for fundamentally flawed doctrines and recommendations.

Carlo Clericetti – Solidarity Only in Exchange for Subordination

It is becoming increasingly clear that what were condescendingly termed the PIIGS (Portugal, Italy, Ireland, Greece, Spain) have learnt from the 2010 crisis where the true SWINES in Europe are. Carlo Clericetti is an Italian […]

Robert Skidelsky – The Monetarist Fantasy is Over

The only stabilizing that a capitalist market economy needed, Friedman said, was of the price level. Provided that inflation was controlled by independent central banks and government budgets were kept “balanced,” economies would normally be […]