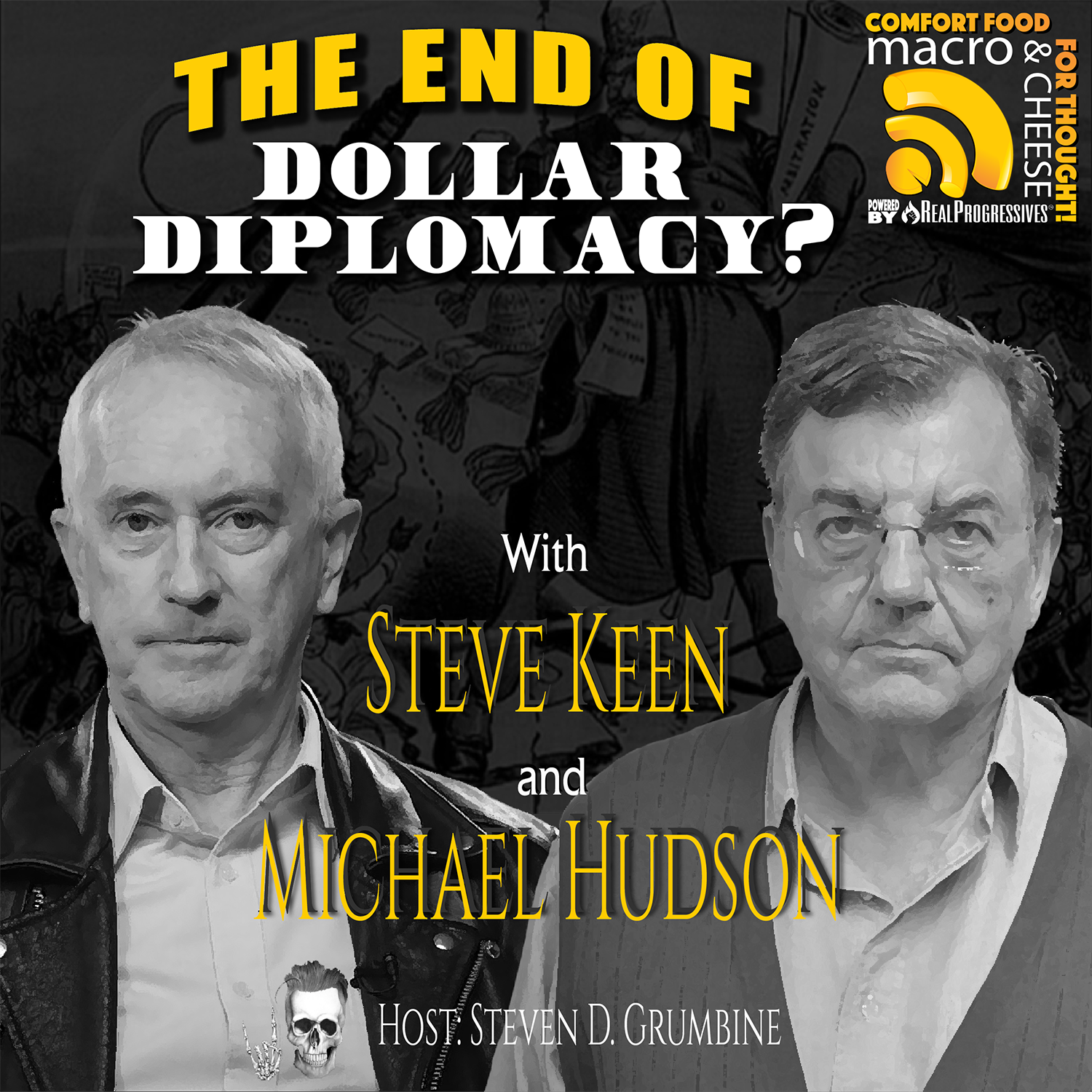 In one of the most exciting pairings we’ve had on this podcast, Michael Hudson and Steve Keen join Steve Grumbine to talk about geopolitics, international production and trade, the climate crisis, and a bit of MMT.

Grumbine begins by asking them to address Warren Mosler’s position that imports are a benefit and exports are a cost. Keen and Hudson have a different take on this question, and we’ll be interested to hear how our listeners respond.

“Well, America is going to make a killing on oil exports because the United States controls the world oil trade. The US is also a major agricultural exporter, and it’ll make a killing because NATO has imposed sanctions on Russia, preventing Russia from exporting oil and food. It’s the largest grain exporter into the economy. So you’re going to have South America, Africa, and the global South countries all of a sudden running big deficits.” (Hudson)

In a previous interview, Steve Keen spoke of broken supply chains resulting from the Covid pandemic. Spreading production across the globe results in a fragile system, easily disrupted by war, famine, or other catastrophic events. From another angle, around 20% of our carbon production comes from the mechanics of shipping goods around the world. He also asks if imports are a benefit for nations without monetary sovereignty.

Hudson is deft at painting a vivid picture of the current international political economy. US attempts to isolate Russia have backfired, evidenced by BRICS and the strengthening alliances among non-NATO nations. He describes a world being split into two different economic zones.

“China doesn’t have a financial oligarchy because it treats money and credit as a public utility through the Bank of China. And so the Bank of China, as we said, makes loans to actually develop the economy. And that’s what Russia says it’s going to begin doing, not to create a financial class to make money at the expense of the 99%. So we’re dealing with a civilizational problem. And the question is, which form of civilization? Can you rescue Western civilization from the wrong track? Well, only by creating an alternative on the right track and leaving Western civilization and say, well, you’re missing out on the development. Do you want to continue in poverty or are you going to have a revolution?”

Keen and Hudson are two old friends, each with their own distinct but overlapping focus. Between them they bring colorful insights and information to the conversation. In this episode they touch on the American Constitution, the stranglehold of the FIRE sector, and the history of debt jubilees. They talk about the European Green Parties (spoiler alert: they are cheerleaders for neoliberalism). They contrast and compare the World Bank to the Bank of China, and their respective roles vis-à-vis humanity. They discuss de-development and possibilities for the future of the planet.

Steve Keen is a Distinguished Research Fellow at UCL and the author of “Debunking Economics,” “Can We Avoid Another Financial Crisis?” and his latest “The New Economics: A Manifesto.”  His main research interests are developing the complex systems approach to macroeconomics, and the economics of climate change. @ProfSteveKeen on Twitter

Michael Hudson is President of The Institute for the Study of Long-Term Economic Trends (ISLET), a Wall Street Financial Analyst, Distinguished Research Professor of Economics at the University of Missouri, Kansas City. He recently published “The Destiny of Civilization – Finance Capitalism, Industrial Capitalism or Socialism.” For access to his many books, articles, and interviews, go to michael-hudson.com

Yanis Varoufakis – Why is economics not a force for good and what must we do to make it so?

“At the Cambridge Union on 7th November 2019 Yanis Varoufakis smashed the academic boundary walls of economics in style. His critical principles come from his characteristic cool iconoclasm – he has ‘zero respect for economists’ […]

Rupert Read – Out of the Ashes

Watch the film! Is THIS civilisation finished? Looks like it. But what comes next? That’s where you come in… My new short film OUT OF THE ASHES, written by me & @frannyarmstrong and directed by […]

Last week on the Debunking Economics podcast Phil and Steve talked about the likely imposition of Austerity 2.0 around the world, in particular in the UK. Steve said there’s really no need for it. This […]