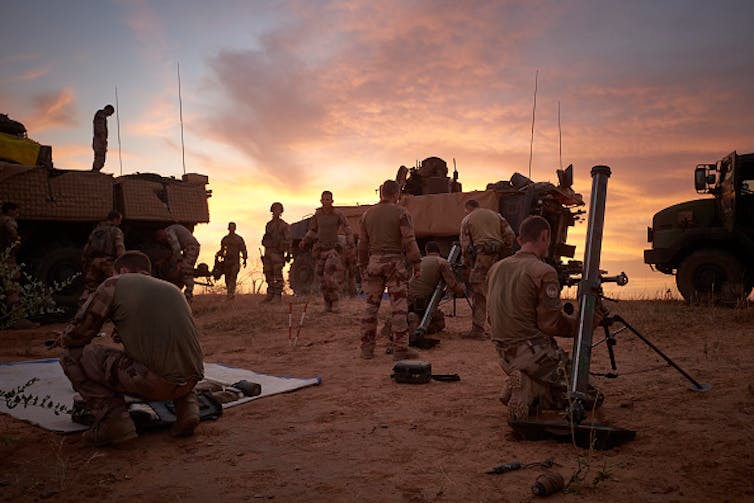 Soldiers from the French Army in Mali. The withdrawal of troops has begun.

France has begun withdrawing its troops from northern Mali as part of plans to reorganise its anti-insurgent forces deployed in the Sahel region under Operation Barkhane. French army bases in Kidal, Tessalit and Timbuktu will be closed by the end of the year and handed over to the Malian army. Air support will be maintained. But the current contingent of 5,100 French troops will be reduced to roughly 3,000. Adejuwon Soyinka asked Mady Ibrahim Kanté to explain the significance of the changes.

What has changed since France first intervened in 2013?

France intervened in Mali in 2013, “following the request” from the transitional government of President Dioncounda Traore to help combat terrorism. At the time, the then French President François Hollande declared that the objective of intervention was to “fight against terrorism”.

The declared intention was to deploy French troops in Mali alongside the Malian army to stop Islamist forces going to the south. But it could be argued that the strategic objective of the intervention was the protection of French security and economic interests in the Sahel and West African region.

The initial focus was on the interior of Mali. But the reality is that terrorism is a cross-border phenomenon. In effect France’s intervention was aimed at imposing a reverse domino effect that would allow it to face the terrorist groups in the region – and to impose itself again in the Sahel.

But there are few visible or effective results on the ground after eight years of war in Mali. And opinion has started to turn as Malians, as well as the country’s transitional authority, see the security situation in the country getting worse day by day.

The French forces face many challenges, in terms of protecting civilians, this is according to a recent report by the United Nations Multidimensional Integrated Stabilization Mission (MINUSMA) in Mali.

In addition, France is accused of protecting and supporting armed separatist groups in Kidal, one of the desert regions of northern Mali, by many Malians.

It’s therefore clear that France has lost its support of Mali’s government, which has accused Paris of training terrorists responsible for instigating and exacerbating ethnicism in the country.

Combined with the population expressing their dissatisfaction about the presence of the French forces in Mali, France had no choice but to reduce its military deployment.

Is France leaving Mali better off?

First, we have to know that Mali has strong historical links with France since it is a former French colony. In the broader Sahel region, France remains the leading Western power.

But a majority of Malians have begun to doubt the sincerity of France, with mistrust becoming increasingly prevalent.

The other development has been Russia’s growing interest in the region. If all French troops were to leave tomorrow, Russian forces – under the Wagner group – would be ready to fill the gap. Russia has the capacity to do so. It has demonstrated recently in Central Africa Republic that it capable of dealing with one of the most important threats in that country.

In addition, Malian public opinion favours the arrival of the Russians.

What does the future hold for Mali?

Abandoned by its former allies, the Malian army is now on the ground without French military drones or American logistical support.

Added to this is the precarious political situation in the country. There was a change of government in late May after a coup d’état. A month later on 20 July, the new President of the transitional Government, Colonel Assimi Goïta, was the target of an assassination attempt at the Great Mosque in Bamako.

There are two possible scenarios:

The first would be that Mali establishes a new cooperation agreement with one of the world powers. For example, Russia and its Wagner group. In the eyes of some Malians and the government they are better placed to manage the situation.

As for the second scenario, negotiations with the jihadists will be on the table, a move that’s been rejected outright by France.

However, it’s my view that negotiations with the two Malian terrorists Iyad Ag Ghali and Amadou Koufa will become the option of choice for the Malian government. They could then wage a joint battle against the Islamic State and non-Malian terrorist groups in the country.

But France hasn’t left the region – and by extension Mali. It will retain a presence through the Sahel Alliance which was launched in 2017 by France, Germany and the European Union. This works closely with the G5 Sahel which was set up by Burkina Faso, Chad, Mali, Mauritania and Niger as a joint effort to fight organised crime and terrorism.

Stability may be a long way off, however. A recent report on the United Nations Multidimensional Integrated Stabilisation Mission (MINUSMA) in Mali shows that it faces serious challenges. The report notes:

In an increasingly challenging security environment, additional air assets are urgently needed to enable the Mission to deliver on its mandate.

Patrick Cockburn – The Forever War in Afghanistan is Far From Over

Not much talk about this fiasco with regard to European nations, nor how much money was wasted. The irony is that the German Green Party was one of the most fanatically pro-war parties and part […]

Ben Wray – Corona Crisis: ‘We have to fight for our lives while we’re still trying to save other people’s lives’: Interview with UK medical courier Alex Marshall

The public should have learnt by now, many of those crucially essential workers who are pulling us through the corona crisis are poorly paid, and treated like rubbish by their employers. It is not applause […]

During the leadership contest of Germany`s largest political party, the rightist Christian Democrats, climate change was not a topic. The debate in Germany concerning strikeing school students is not about climate change, but if kids […]