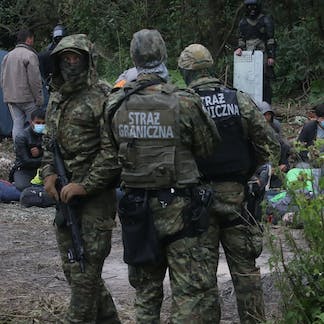 Just in the month of November 2021, migrant boats have capsized in the central Mediterranean Sea, the Atlantic, the Aegean and the English Channel.

The official death toll at the external borders of the EU stands at over 1,600 so far this year, though acknowledged to be a massive underestimate. At the same time, people have frozen and starved to death at EU land borders to Belarus. Most of those who have lost their lives appear to have done so on EU territory.

People seeking safety and protection are dying within and all around Europe. While they are clearly at risk themselves, on precarious boats or in forests in the winter, they have been portrayed as a risk to Europe that needs defending against. The whipping up of defence narratives by connecting migration with security risks is not new, but has not lost any political potency.

In the case of the Poland-Belarus border, people on the move have been referred to as “weapons” and “hybrid threats”. The EU defines hybrid threats as a mixture of tactics used to “exploit the vulnerabilities of the EU” while “remaining below the threshold of formal warfare”.

According to Polish prime minister Mateusz Morawiecki, migrant crossings via Belarus are the greatest threat that the EU has faced in decades. Morawiecki says “we are dealing with a new type of war, a war in which migrants are weapons”.

In response to this ostensible war, Poland has further militarised its border, carrying out mass “pushback” operations to force migrants back into Belarus, and creating a de facto rights-free zone. Doctors, non-governmental organisation workers and journalists are prohibited from entering, and as a result, we are learning of human rights violations largely through those subjected to them.

Poland systematically breaches international law and refugee conventions and does not, according to legal experts “even purport to conceal its disrespect of EU asylum and migration law”.

This could have worsened existing tensions between Poland’s government and the EU. Poland, along with Hungary, has long been considered a rather “rogue” EU member state showing signs of democratic backsliding due to its failure to respect EU rules, the primacy of EU law and judicial independence.

One might think that forcibly pushing people seeking protection back into the hands of a dictator would cause alarm bells to ring throughout Europe. And yet Poland’s radical “no entry” policy has earned support from the EU level. The European Commission has made clear that it stands in “solidarity with the Member States on the front line”.

Tweeting “when one of us is attacked, we are all attacked”, the commission has proposed allowing further reduction of migrants’ rights at the border. The proposal would restrict where migrants can claim asylum to specific locations at the border and allow them to be detained there for a considerably longer period of 16 weeks.

Commission president Ursula von der Leyen has joined the effort to turn migration into a security threat: “Let’s call it what it is: this is a hybrid attack to destabilise Europe.”

Such EU solidarity with member states, despite overwhelming evidence of migrant rights violations, is not new. Despite its implication in mass pushback operations, Greece, depicted as Europe’s “shield”, was lauded by Von der Leyen in spring 2020. “I am fully committed to mobilising all the necessary operational support to the Greek authorities,” she said.

Why is the European Commission, an institution that cherishes its image as the EU’s humane and moral compass, choosing to stand with member state governments widely condemned for migrant rights violations?

One possible explanation could be that the current European Commission has realised that engaging in rhetorical balancing acts in matters of migration is no longer politically expedient or necessary. The Juncker Commission was repeatedly criticised by the likes of Hungarian Prime Minister Viktor Orbán for being too soft on migration. In contrast, the commission under Von der Leyen appears to have followed Orbán’s call in 2019 for “a new commission … with a new approach”.

Rather than downplaying and concealing the EU’s active role in creating a violent and deadly migrant deterrence regime, the commission has gone on the offensive. This is exemplified in the EU’s handling of migration, including EU border agency Frontex’s involvement in mass pushback operations, and the financing of authoritarian regimes and militia forces in Libya to outsource border control.

What we currently see unfolding along the EU’s external borders is not a series of unfortunate tragedies, but the consequence of policy decisions made in the name of defending Europe against an imagined threat. Through its unwavering support for Poland’s migrant rights violations, the current commission sends a signal to all those who believe that violent deterrence is the only response to precarious migration.

While the death toll at the external borders of the union keeps rising, we see other defenders come onto the scene. Along the border to Belarus, ordinary Polish citizens have begun to illuminate their homes with green lights at night to signal that people in need are welcome to seek shelter. In doing so, they defy the efforts of both EU member states and institutions to portray people on the move as security threats. By offering refuge, they open their homes not to weapons, but humans.

Helen Thompson – The unintended euro and the problem of Italy

If you can get past the academic veneer, this is a very interesting article. Alone that the author claims that the EU has become a battlefield between Germany and international finance on the one side, […]

“It is Russia that has invaded Ukraine, but it is NATO’s high-handed indifference to political reality that has provoked the war. Reckless is a polite way of describing NATO’s policy.” Philip Cunliffe is Senior Lecturer […]

One of those typically thought provoking pieces by Branko Milanović: Why is population density associated with both lower inequality and lower extraction? Branko Milanović is an economist specialised in development and inequality. His new book […]