The neo-liberal crusade continues. This time it is once again the public sector that is under attack: academics and adminstrators at British universities. We can only wish those striking success an offer our support and solidarity.

Dr Michael Mair is Senior Lecturer in Sociology at the University of Liverpool and works on politics, accountability and contemporary warfare and conflict. 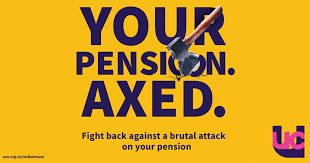 On Monday, a strike involving university staff across the UK enters its second week. As it does so, it is becoming clear that Universities UK (UUK), the university employers’ body which precipitated the dispute, has significantly misread the mood of its staff, its students, the political parties and the wider public. Instead of support ebbing away, support for the industrial action is increasing. Students have turned out in numbers to join staff on the picket-lines. And, perhaps because they have been struck by the unified front that has been presented, reports from around the UK suggest significant numbers of staff who were not in the UCU have joined the union on the picket-line and added further weight to the industrial action. While there has been support from the centre/left-leaning media and the Labour party, including Jeremy Corbyn, more surprising has been the hostility of newspapers on the right to the UUK stance, for instance, the Times. That the Conservative Minister for Universities, Science, Research and Innovation, Sam Gyimah, has called UUK to rejoin negotiations with “no preconditions” suggests UUK’s stance is becoming increasingly untenable.

The strike began on Thursday 22nd February when members of the UK’s University and College Union (UCU) began the first of 14 days of rolling strike action – industrial action on an unprecedented scale in the UK’s higher education sector. Academics and administrators are striking in protest against changes to their pensions being driven through by UUK, a body which, in its own words, is “made up of the vice-chancellors or principals (executive heads) of universities in England, Wales, Scotland and Northern Ireland” and acts on behalf of the employers in the sector. Under the proposed changes all university staff who are currently enrolled in the University Superannuation Scheme (USS), concentrated in 64 universities across the UK, would see their pensions shift from a “defined benefit” scheme, where a level of income is guaranteed relative to length of service and pay-scale, to a “defined contribution” scheme, where retirement income is linked to stock market performance and the guarantees disappear. University staff in the scheme stand to lose an average of £10,000 per year due to these changes, with younger staff who have just begun their careers standing to lose more than £200,000 over the course of retirement. In effect, this will mean pensions will be fully financialised and vulnerable to the whims of the market.

Although it involves academics, the ramifications go well beyond the higher education sector. This is one of the most aggressive direct moves yet made by a (nominally) public sector body on its employees’ pension rights – although there have been lots of indirect moves before it, typically achieved through outsourcing, contracting and workforce casualisation, all of which are features of the UK’s higher education system too – and it opportunistically piggybacks on the austerity narrative that has characterised Britain post-financial crash. Some of the finer points of the dispute may be difficult to fully follow for those not familiar with British universities. Nonetheless, the origins and rationale behind the attempted changes are all too clear. Most immediately, the employers suggest university pensions have become unaffordable, that the pension fund is unsustainable and, just as defined benefit pension schemes have disappeared in the private sector, staff in the public sector have to resign themselves to the loss of pensions which are, in effect, luxuries in the contemporary ‘austerian’ world. This claim is particularly egregious in the university sector where the heads of universities, the vice chancellors and principals, have seen their salaries balloon to an average of £246,000 (and £286,000 with additional benefits), where university administrations have expanded massively and where universities have embarked on capital investment programmes worth many billions of pounds designed to deliver profit-generating revenue in the long-term. The money fuelling this bonanza comes from rising student tuition fees. Students in England now pay £9,250 per year for their 3 year degree courses. With grants for accommodation and living expenses scrapped, they take out loans for those additional costs too, leaving university on average with more than £50,000 in debt on which they pay 6.1% interest. This makes the UK system one of the most expensive in the world. While depressing, against this background it will probably come as no surprise to find out that one of the biggest areas of capital investment UK universities are engaged in is student accommodation where they seek to capture a higher proportion of students’ income through excessive rents – a £45 billion market across the UK.

The paradox of the situation is that this system for privatising debt and asset stripping future generations is publicly financed. Huge amounts of government money have flowed into British universities since the introduction of tuition fees by Tony Blair’s New Labour administration in 1998. The fees were initially set at £1,000 per year, were raised to £3,225 in 2009, then £9,000 in 2012 and reached their current level of £9,250 in 2015. This money has not been reinvested in students’ education. Instead, as a workplace, universities have become increasingly casualised with more and more of the routine aspects of teaching undertaken by postgraduates or staff on temporary contracts. Full time staff have seen a 24% pay cut in real terms since 2009 and “universities’ spending on staff has fallen from almost 58% of their income a decade ago to 52% today”. The emerging model is clear; raise prices and reduce services, wages and associated employment rights in order to maximise profits. While the threat to the pensions of university staff is reason enough to take industrial action, university staff are also clear that not standing up to this remarkably aggressive move will mean this model will become entrenched. The dispute does centre on university pensions, therefore, but has wider implications. First, it is about British higher education and the idea of what a university should be. Second, it is also about standing up for employment rights under austerity and challenging the idea workers should be sacrificed in the pursuit of profit – in the UK, which has one of the lowest state pensions in the OECD, good occupational pensions are not a luxury but a necessity.

A leaked email from St Andrews University suggests UUK believed UCU would not be able to sustain the action for more than a day. They have been proven wrong and parts of the coalition of university vice chancellors and principals who originally supported the proposed changes have begun to peel off (paywall). Conciliatory messages have begun to appear in the media. However, that same leaked emails suggests the next part of the strategy will be to ask UCU to call a temporary halt to the strikes, break the momentum and then push through the changes anyway – similar tactics to those adopted against junior doctors in the UK when they took strike action last year. University staff understand this, however, and will not be easily swayed. This is a fight we must win and we’re in it till we do.

John O’Nolan/Unsplash, FAL Steve Keen, UCL While climate scientists warn that climate change could be catastrophic, economists such as 2018 Nobel prize winner William Nordhaus assert that it will be nowhere near as damaging. In […]

Quantitative easing – not to save bankers and property barons – but for the insecure majority of people, creating jobs, raising incomes, and making their lives more bearable, should be part of a pan-European Green […]

Stock markets have recovered so life is returning to normal – whatever that might be. The Russian invasion in Ukraine is however far from over, including the world wide dangers it contains. Patrick Cockburn is the […]