So much has been said and written about inflation in the past. Now we have the realisation that economists do not understand inflation.

Is inflation going to rise once the lockdowns from the pandemic have been relaxed?  Mainstream economics has no idea.  For a start, the rate of inflation in the prices of goods and services in the major capitalist economies has been falling as a trend since the 1980s.  And this is despite the attempts of central banks to boost the money supply in order to stimulate demand and reach a certain inflation target.

Indeed, just before the COVID pandemic broke, inflation rates were falling well short of the target rate (usually around 2% a year) aimed at by central banks.  Monetary policy was not working in terms of sustaining a moderate rate of inflation; instead money/credit was flowing into financial assets and property, driving up prices in those assets to new record highs. 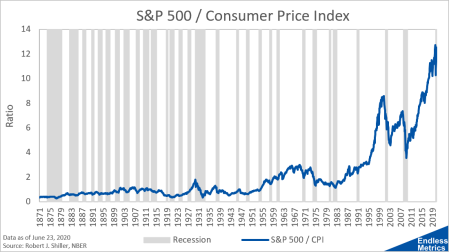 But why do we care what the rate of inflation is?  Well, workers and their families do not want prices in the shops or for utilities and other services to be rising faster than their wages and benefits.  On the other hand, businesses do not want collapsing prices, so that profits are squeezed and employers are forced to stop production or go bankrupt.  So it has become a conventional wisdom that moderate inflation is good for capitalist production; as against hyper-inflation nor deflation.

During the pandemic lockdowns, inflation of prices in most goods and services (not all) slowed or even fell, as people were locked down, furloughed or lost their jobs.  So spending, particularly on travel, entertainment and other ‘discretionary’ items was curtailed.  Supply may have slumped at an unprecedented amount, but so did demand.

But what will happen, if and when business revives?  Will deflation take over as firms go bust or will hyperinflation emerge because of the huge amount of credit-backed ‘pent-up’ demand inspired by central banks that cannot be met by supply?

As I say, the mainstream has no idea.  As Wolfgang Munchau in the FT put it: “central bankers do not really understand how inflation works. There are lots of theories and approaches, theoretical and statistical, but none that has been able to explain persistently what is going on in the real world.  In the case of the ECB, that lack of understanding is best symbolised by the almost comical failure of its inflation forecasts. The forecast went wrong because of a false belief that inflation would eventually return to the 2 per cent target. A random number generator, a monkey with a dartboard, or even a horoscope would have outperformed the ECB here.”

Munchau went on: “The problem is not that somebody got a forecast wrong. We all do, all the time. The troubling bit is that these forecasts reveal a basic lack of understanding of the underlying inflation process. There is some recent evidence that globalisation may have changed the inflation process. Even if true, this is not necessarily a helpful observation either. We do not know exactly what kind of period we are entering.”

The reason that mainstream economics is floundering is because its two main theories for accounting for inflation in capitalist economies have been found wanting.  The first of these starts from the demand side of the price equation.  Demand is provided by the money in our pockets or in our bank accounts (whether households or businesses).  Thus, we have the monetarist theory of inflation based on the quantity theory of money.

The theory has a simple formula: MV=PT, where M = the quantity of money in the economy; V = the rate of circulation of that money through the economy, its velocity, P = prices of goods and services and T = the number of transactions in the market.

The argument goes, as from its most famous modern exponent, Milton Friedman, that “inflation is always and everywhere a monetary phenomenon” (Milton Friedman, Inflation Causes and Consequences, Asian Publishing House, 1963.)  Leaving out V and T for a moment, then if money quantity rises, prices will rise and vice versa.  Or, if you like, if the quantity of money rises faster than the production of goods and services (nominal GDP), then there will be inflation.

The first thing to say against this simple theory is that the formula also includes V and T and if the velocity of money should fall sharply and transactions drop off dramatically, that could counteract any increase in money supply.  And that is indeed what happens when economies slow down sharply, particularly in slumps.  So the pace of economic transactions can act to slow or reverse any rise in money supply.  And that is happening now.  In 2020, money supply growth has rocketed to over 25% yoy, but inflation in most countries stays well below 2% a year.

The velocity of money has slowed sharply since the end of the Great Recession and has now dived during the pandemic.

Also, the historical evidence is against that the theory that inflation is driven by the quantity of money.  For a start, Friedman and Schwarz’s empirical analysis of money supply and real GDP growth in the 1930s Great Depression was fraught with errors and ‘heroic’ assumptions.

And if we look at consumer price inflation over the last 30 years (I am using US data here, but it applies to the other major economies too), the rate has trended downwards and yet money supply growth has been stable or rising.  Between 1993 and 2019, M2 money supply rose at an average rate of 6.7% a year, but CPI inflation rose at only 2.3%.  And from the Great Recession in 2008, money supply growth accelerated to 9.6% a year as central banks applied ‘quantitative easing’, but CPI inflation slowed to 1.8% a year.

The other mainstream theory is that of the Keynesians.  They come from the supply side of the price equation.  Price inflation comes from rising raw material prices and from rising wages.  As long as there is ‘slack’ in the economy (lack of demand), then more unemployed can be put to work and unused capacity in factories and stocks can be utilised and inflation will not rise.  But if there is full employment, then supply cannot be increased and workers can drive up wages, forcing companies to raise prices in a wage-price spiral.  So there is trade-off between the level of unemployment and prices.  This trade-off can be characterised in a graphic curve, named after AW Phillips.

Unfortunately, the evidence of history runs against the Phillips curve as an explanation of the degree of inflation.  In the 1970s, price inflation reached post-war highs, but economic growth slowed and unemployment rose.  Most major economies experienced ‘stagflation’.  And since the end of the Great Recession, unemployment rates in the major economies have dropped to post-war lows, but inflation has also slowed to lows.  The Phillips curve has flattened to non-existence (see the brown dots ‘curve’ in the graph of unemployment against inflation in the advanced economies below). 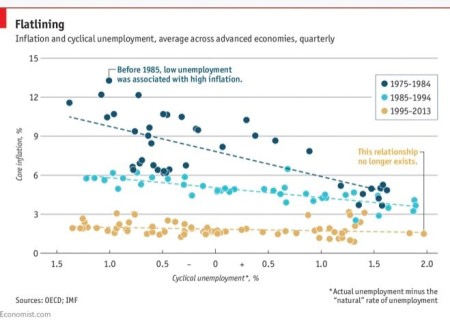 So the mainstream is ‘puzzled’. Indeed, ECB board member Benoit Coeure  recently commented “Economics is indeed struggling with inflation theory. Monetary aggregates and monetarism have been correctly abandoned. Domestic slack explanations (the Phillips curve) have been under attack but are still a bit alive”  And while “there are tons of econometric papers trying to bury or defend a significant slope coefficient in complex reduced-form regressions that forecast inflation (also called Phillips curves to add to the confusion) or in PC embedded in models. Econometric results always insufficient.” Coeure concludes: “Anyone can feel lost in this ambiguity of econometrics” And Janet Yellen, former chair of the US Federal commented: “Our framework for understanding inflation dynamics could be ‘misspecified’ in some fundamental way.”

The mainstream answer to whether inflation will return as economies end lockdowns and stage some sort of economic recovery is: ‘we don’t know, but maybe at some point’.  Can Marxist political economy offer an alternative and more effective theory of inflation?  I shall discuss this in the next post.

After the people of Ukraine and Russia, the other losers of the Ukrainian war will be Europe. Michael Hudson is the author of Killing the Host (published in e-format by CounterPunch Books and in print by Islet). His […]

Come on! Be a real European for once in your life, not just a faux European posturer. Read an article about the political and economic situation in Britain. What will you discover? That it is […]

On the eve of the United Nations General Assembly, thousands of academics have urged governments to negotiate an international treaty to tackle the climate crisis at its source: fossil fuels. To sign the call or […]