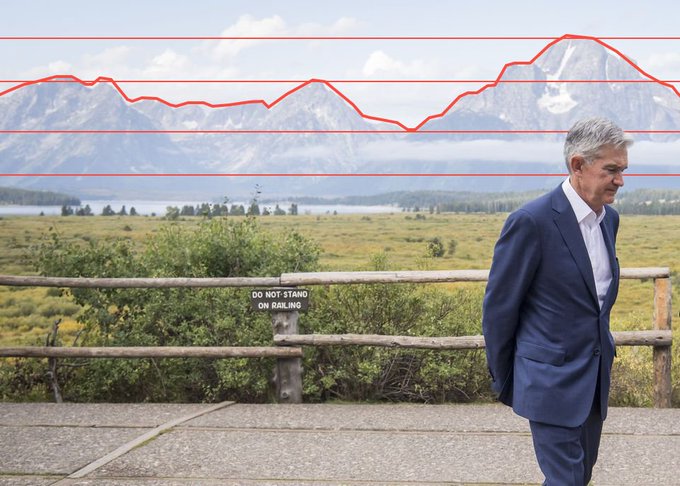 Jay Powell, the chair of the US Federal Reserve, made a keynote speech at the annual summer symposium of central bankers in Jackson Hole, Wyoming, USA.  This was closely watched by financial investors and economists to see if Powell was going to support the strategy of a ‘Fed pivot’ on interest-rate policy.  The pivot is supposed to be a softening on the current aggressive hiking of the Fed’s policy rate. The pivot would keep interest rates from rising too much and thus sustain the stock market and the economy.  After all, the US year on year inflation rate had subsided a little in August from a high of 9.1% to 8.5%; and real GDP was again confirmed in decline in the first half of 2022, while consumer spending has been falling back.  So the signs of recession have increased, if the US is not already there.

But that made no difference to Powell. His speech made it clear that there would be no ‘Fed pivot’.  Powell reckoned that inflation was still too high and so the Fed’s tightening cycle was far from done.  “With inflation running far above 2% and the labor market extremely tight, estimates of longer-run neutral are not a place to stop or pause. ” He went on to tell us that we are going to suffer a hit to jobs and living standards as a result of the Fed’s tightening policy, but that could not be avoided: “Restoring price stability will take some time and requires using our tools forcefully to bring demand and supply into better balance. Reducing inflation is likely to require a sustained period of below-trend growth. Moreover, there will very likely be some softening of labor market conditions. While higher interest rates, slower growth, and softer labor market conditions will bring down inflation, they will also bring some pain to households and businesses. These are the unfortunate costs of reducing inflation. But a failure to restore price stability would mean far greater pain.”

Financial investors took the speech badly.  The US S&P 500 and the Nasdaq tumbled 2.5% and 3%, respectively.  So no Fed pivot then.  Powell was determined: “a lengthy period of very restrictive monetary policy was ultimately needed to stem the high inflation and start the process of getting inflation down to the low and stable levels that were the norm until the spring of last year. Our aim is to avoid that outcome by acting with resolve now.”

Powell claimed that “The first lesson is that central banks can and should take responsibility for delivering low and stable inflation.”  Well, they may take responsibility, but the problem is that central banks cannot deliver on low inflation with their monetary tools of higher interest rates and withdrawing liquidity in what is called quantitative tightening (QT).  All through the decade of the Long Depression after the Great Recession of 2008-9, central banks tried to get inflation up to their 2% target rates by keeping interest rates at zero or even below and through quantitative easing (QE) ie buying government and corporate bonds and increasing the money supply.  But none of these measures worked.  Inflation stayed below target and so did economic growth.  Instead, what QE brought was a huge stock and property market bubble.  Now it’s the other way round and it still won’t work.  QT will bring a stock market and property crash; and recession, not lower inflation.

That’s because inflation depends on the relation between supply and demand for goods and services.  That’s obviously a truism of capitalist economics.  But while central banks may affect aggregate demand to some extent, monetary policy has little or no effect on aggregate supply.  That depends on productive investment, which in turn depends on the profitability of that investment.  And that’s the problem.

The current inflationary spiral is mainly due to constrictions on supply, particularly in energy, food and other commodities, as well as global supply chain blockages for many components and products needed to meet demand.  But underlying these immediate causes is the long-term decline in productive investment and labour productivity growth in the major capitalist economies, as I have argued before.  So the Fed and other central banks can do little but sink their economies further into the Jackson Hole by raising the cost of borrowing for investment and consumption.

At Jackson Hole, various mainstream economists present papers on the state of capitalist economies and on the efficacy of monetary policy.  It was revealing what Gita Gopinath, the former IMF chief economist had to say. “Existing (mainstream – MR) models cannot explain the inflation surge”, Gopinath said.  For example, the so-called Phillips curve which purports to show that tight labour markets and rising wages cause inflation, does not fit the facts, said Gopinath, as economies have experienced rising inflation without wages leading it.  She also admitted that the IMF had failed to predict any rise in inflation rates (not just in energy and food but in what are called ‘core prices’ in the shops and services).

Gopinath argued that the current high inflation rates were due to massive global fiscal stimulus by governments during the COVID slump, putting too much money into the hands of households (!); heavy spending on goods (!); and an unexpected fast recovery in demand globally after COVID (!).  But having presented an array of graphs to justify her argument that inflation was the result of too much demand; she then slipped in a sentence: “Alongside a contraction in potential output and employment.”  And here we have it.  It was the inability of capitalist production to deliver to meet demand.  This was the main cause of demand exceeding supply and driving up inflation.  So when the Fed and other central banks continue to tighten monetary policy, they will drive down demand (ie investment and consumption) and given already weak and stagnating supply, all that will happen is that they will trigger a slump because the ‘supply side has not recovered from both the Long Depression and the COVID slump.

At Jackson Hole, former White House economist Jason Furman was there to tell us that neither the US nor the Eurozone had returned to the pre-pandemic trend growth, as hoped for.  Instead, both economies were heading south again.  And that the main reason was very poor productive investment growth. “Using the expenditure components, the biggest source of the shortfall is the that non-residential fixed investment (or business fixed investment) remains way below what the CBO (Congressional Budget Office) thought it would be.”

But the Fed, the ECB and the BoE will plough on driving up interest rates just as the economies they preside over head towards a slump.  The US Conference Board’s index of the US Top 10 Leading Indicators has had a 100% success rate in anticipating every recession over the last 40+ years. And the indicators are now on the cusp of forecasting a new slump.

“The US LEI declined for a fifth consecutive month in July, suggesting recession risks are rising in the near term,” said Ataman Ozyildirim, Senior Director, Economics, at the Conference Board. “Consumer pessimism and equity market volatility as well as slowing labor markets, housing construction, and manufacturing new orders suggest that economic weakness will intensify and spread more broadly throughout the US economy. The Conference Board projects the US economy will not expand in the third quarter and could tip into a short but mild recession by the end of the year or early 2023.”

We shall soon see how ‘mild’ or deep the Jackson Hole is for the major economies.

Bill McGuire – Fire and flood: how we are overshooting the Earth

Our weather extremes are signs of a human population overshooting its planetary home, writes Prof Bill McGuire, what will it take to make us change course? Bill McGuire is Professor Emeritus of Geophysical & Climate […]