We are living in unusual times where institutions seem intent upon destroying their credibility. Good so. 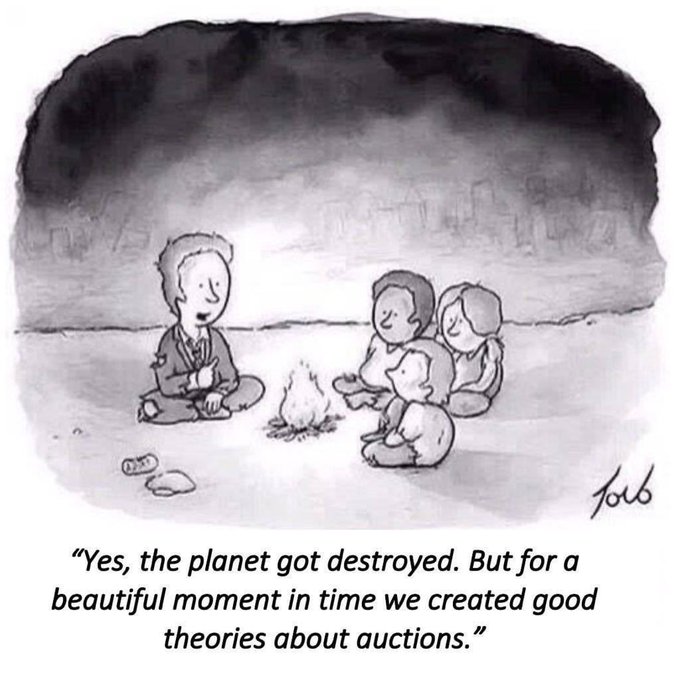 This year’s ‘Nobel’ (actually the Riksbank) prize for economics went to Stanford University economists, Paul Milgrom and Robert Wilson.  According to the Royal Swedish Academy of Sciences, they “have studied how auctions work. They have also used their insights to design new auction formats for goods and services that are difficult to sell in a traditional way, such as radio frequencies. Their discoveries have benefited sellers, buyers and taxpayers around the world.”

So in a world where inequality is at record levels, global warming and environmental degradation are threatening to destroy the planet and there is a world economic slump not seen since the 1930s, the prize givers recognise the work of two economists on how to make the auctions of commodities, land and services more efficient.

Our prize winners used game theory to work out how to avoid the ‘winner’s curse’ of buyers paying too much for something in an auction, while making sure sellers getting a ‘fair price’ ie a fair exchange based on an agreed common value for a sale of a good or service.  Milgrom and Wilson apparently came up with some auction rules that ensure that the ‘private’ estimates of value by bidders and sellers are combined to deliver a ‘common’ value acceptable to all.

All this was theory that had to be put into practice – indeed, as Wilson said, he had struggled to think of an auction in which he himself had participated. But then added: “My wife points out to me that we bought ski boots on eBay. I guess that was an auction.”  But this is no crime.  Einstein’s ‘game changing’ theories were developed without practical application and were only confirmed by the empirical work of others.

Apparently, Wilson and Milgrom’s game theory of auctions has been used in practical situations with ‘success’. The Nobel team cite the auction they designed so that the US authorities could sell radio frequencies to telecom operators.  As they comment: “These frequencies are government owned, but private actors can often utilise them more efficiently.”   So the economists’ theories were applied in order to make the privatisation of services owned by the public more efficient, particularly for the bidders, so that they did not pay too much for them.

The Nobel team consider this a benefit to society. “Auction outcomes are also very important for us as taxpayers and as citizens. Often, the companies that manage our home refuse collection have won a public procurement by placing the lowest bid. Flexible electricity prices, which are determined daily in regional electricity auctions, influence the cost of heating our homes. Our mobile phone coverage depends on which radio frequencies the telecom operators have acquired through spectrum auctions. All countries now take loans by selling government bonds in auctions. The purpose of the European Union’s auction of emission allowances is to mitigate global warming.”

So this prize for economics is won by two people whose theory has been used to make markets work more efficiently, supposedly to keep the price of energy and communications down and ‘mitigate global warming’.  What can you say about this nonsense?  How has any of this really helped controlling prices in the shops, the rents paid for housing, the utility charges demanded by various monopolies and for that matter the cuts, outsourcing and privatisations of public services etc?  This is an award for generating private profits.

Ironically, it turns out that the game theory of our winners has huge black holes in it, costing taxpayers millions.  Luigi Zingales has explained how private equity companies have ‘gamed’ the auction process in radio and TV licences despite the brilliant theories of our prize winners.  “I think economists like to focus on theory, and theories don’t always play out in terms of practical realities. I can see why economists are thinking about the best way to structure this auction. And they’re like, “You know what? It should involve these two different components.” But they weren’t thinking about the fact that private-equity firms could just kind of sneak their way in and insert themselves into this auction process as a third component. And so, even though in theory they may have been correct, they weren’t really looking at the whole practical picture of how markets work.”

But all this says a lot about what mainstream economics is for; namely to improve the profitability of capital and defend the market model.  Any critic of those objectives is not going to be recognised as making a ‘contribution to society’.  John Maynard Keynes would never have won the economics prize, except perhaps for his obscure mathematical thesis on uncertainty and risk; or perhaps on his long forgotten Treatise on Money.  Certainly his ‘game-changing’ General Theory would have been ignored.  And it goes without saying that other great critics of capitalism and mainstream economics of the heterodox and Marxist schools would not even get a nomination.

You only have to look at the list of Riksbank economics winners to realise everything depends on showing that capitalism works in the best of all possible worlds, and thus ignores the reality of inequality, poverty and crises of production.  The classic case was the prize given to Eugene Fama in 2013.  Fama got it for his work on showing that financial markets work efficiently to price stocks and bonds – the ‘efficient market hypothesis’.  It’s another theory like auction theory – markets can work efficiently with the ‘right rules’.

After the global financial crisis of 2008-9 appeared to refute Fama’s theory of efficient markets, he famously (infamously?) commented that “We don’t know what causes recessions. I’m not a macroeconomist, so I don’t feel bad about that!  We’ve never known. Debates go on to this day about what caused the Great Depression. Economics is not very good at explaining swings in economic activity”.  So no prizes there.

Never shy of making pointed statements, in a new interview, the Professor of Finance at the University of Chicago reckoned forecasting markets was a waste of time.  Economists cannot know anything really.  “You don’t really know what’s determining inflation at this point. There is no control over the stock of what qualifies as money, since reserves aren’t really money anymore because they are paying interest. That means you can’t control the currency supply. In other words: Inflation is totally out of the control of central banks.”  Again, no prizes there.

Fama goes on: “we don’t see a big effect of Fed actions on real activity or on stock prices or on anything else. That’s why I use to say that the business of central banks is like pornography: In essence, it’s just entertainment and it doesn’t have any real effects.”  So much for mainstream and modern monetary theory.

There is a grain of truth in all this.  Mainstream economics has no convincing explanation for inflation or slumps, or financial bubbles and crashes.  You cannot know what is happening because there are too many volatile variables. So Fama says, just recognise that stock and bond prices are what they are – end of discussion.  And you can get a Nobel prize for these observations.  No wonder the Nobel team awards the prize to people who work out how to make auctions ‘more efficient’ and ignore the big issues.

Charles Adams – I Am Greta Thunberg

When arguments and facts run out, you can always count on mainstream media to resort to distraction by personalising an issue. We have seen this with Jeremy Corbyn, who is simply a representative of socialism […]

Trish Greenhalgh, Martin McKee, Michelle Kelly-Irving – The Pursuit of Herd Immunity is a Folly – so Who’s Funding this Bad Science?

American Institute for Economic Research (AIER) is one of the leading neo-liberal think tanks in the world, which has also been a prominent denier of climate change. Once again, follow the money. Just have a […]