The European Green Deal vs the war on regulations 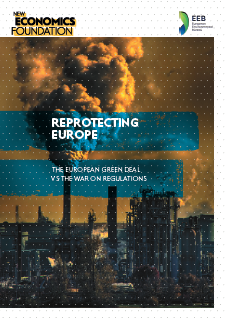 Europe faces multiple environmental, social, and economic challenges. The European Council, representing the Member States, has endorsed the Commission’s commitment to becoming climate neutral by 2050 as part of the European Green Deal, and the European Parliament has adopted a resolution declaring a climate and environmental emergency. It seems very hard to conclude that this is a time when we need Europe to be focused on regulating less and reducing regulatory ​‘burdens’ as a point of principle. But the deregulatory mindset that has taken hold of the European Commission over the last two decades is increasingly visible. Its agenda is rooted in ideology and has been pushed for decades by corporate lobbying as part of a desire to ensure that the costs of social and environmental damage are not the responsibility of those who cause it.

Deregulation is a central plank of an ideological project to put the interests of (some) business over people and the planet. It has been a central demand of big oil and cigarette companies for much of the 20th century, aided by free-market thinktanks. British American Tobacco, for example, directly lobbied for the introduction of the European Commission’s ​‘Better Regulation’ programme to hold off what they saw as an increasing threat to their business. Perhaps the gravest concern with the deregulation agenda is that it privileges business voices over others: not just consumers, but also over those far from the ear of regulators and elected politicians, or those with no voice or rights at all, such as animal species and habitats.

The European Commission’s Better Regulation programme is deregulation by stealth and needs to be reformed. It has made it harder to get important new regulations off the starting blocks, tilted the emphasis of regulatory policy towards minimising the costs to business rather than effectively regulating in the public interest, and subjected existing legislation to needless and unjustifiable review. It has introduced impact assessment methodologies that are biased towards evidencing the short-term compliance costs of businesses directly affected by regulation over the less easily quantifiable social and environmental benefits. There is very little ​‘better’ about Better Regulation for most people or for sustainability, which is being given insufficient weight in policy assessment.

The worst aspect of the deregulation drive is a chilling effect on regulating in the public interest. The purpose of European regulation has been gradually reoriented away from principled and precautionary protection towards reducing regulatory burdens as an end in itself. There is a deep conflict between cutting regulations as a point of principle, and delivering a new Europe fit for the challenges of the 21st century.

The latest threat is a proposed ​‘one in, one out’ regime for European regulations – under which no new regulation could be introduced, irrespective of social or environmental need, without removing an equivalent existing amount of regulation in the same policy area at EU level. This arbitrary and nonsensical approach was rejected for years by the
previous Commission as putting ideology above the public good. Its application would directly clash with the far more important tasks of delivering on the sustainable development goals (SDGs) and the new European Green Deal, and re-energising the European project. It is not explicitly mentioned in the European Green Deal but remains in the mission letters to the commissioners. It should be rejected; experience from countries including the UK shows that such mechanical measures continue to escalate over time – the UK now has ​‘one in, three out’.

It is crucial to maintain the ​‘precautionary principle’ and to defend it from being undermined by the euphemistic innovation principle’. Innovation is needed but within an overall policy framework guided by the public good; it is not an end in itself that is used as an excuse not to assess, manage, and mitigate risks to health, communities, or ecosystems.

The European Commission must set a new priority for regulation before it is too late to deliver on the SDGs and to address crises such as the climate emergency, the biodiversity crisis, and risks to our health and the planet from chemicals and other pollutants. This new approach should infuse the EU’s approach to trade deals, regulatory policy, and enforcement.

The European Commission should:

To help deliver this, members of the European Parliament (MEPs) should:

Miloš Zeman celebrates victory on January 27. Filip Singer/EPA Voters in the Czech Republic re-elected their current president, Miloš Zeman, for another five-year term on January 27. He beat Jiří Drahoš, a chemistry professor, who has […]

Maurice Stierl – EU solidarity with Poland on migration: a violent response to an imagined threat

Maurice Stierl, University of Sheffield Just in the month of November 2021, migrant boats have capsized in the central Mediterranean Sea, the Atlantic, the Aegean and the English Channel. The official death toll at the […]