Slovakia has become the latest country in Eastern Europe to face a major political crisis. But while regional neighbours such as Poland and Hungary have been clashing with the EU over their perceived illiberalism, for Slovakia, the pressure on the government has come from the country’s own citizens.

The tension has been such that the entire cabinet of prime minister Robert Fico had to resign in a single day.

The story began when police discovered the bodies of Slovak journalist Ján Kuciak and his fiancé, Martina Kušnírová, in their home in the village of Veľká Mača, about 60 km east of the capital, Bratislava. Both had died of gunshot wounds in what appeared to be a targeted assassination.

Kuciak, who worked as a reporter for the online news website Aktuality.sk, had been working on an article implicating prominent members of the ruling coalition party SMER-SD in tax fraud. After his death, Aktuality.sk published Kuciak’s final, unfinished article. It detailed alleged ties between several high-ranking officials with the Calabrian crime syndicate, the ‘Ndrangheta. They included Viliam Jasaň, the secretary of the State Security Council of Slovakia, and Mária Trošková, chief adviser to prime minister Robert Fico. Both have denied any wrongdoing.

The stack of cash

Given that all major political parties have been implicated in incidents of crony-capitalism and corruption since Slovakia’s independence in 1993, Kuciak’s revelations hardly came as a surprise to the public. The fact that he lost his life reporting them, however, was a profound shock. Fico’s disdain for members of the independent press, who he previously described as “prostitutes, idiots and snakes”, was already well known. But this was a whole new level. People felt that criminal elements in Slovak society were now able to operate with impunity.

The initial reaction of the Slovak government appeared to confirm this. In their first appearance after the murders, Fico, interior minister Robert Kaliňák and head of policing Tibor Gašpar failed to address questions about the accusations the deceased journalist had made. Instead, they offered a reward of €1m for information about the murder. Bizarrely, they chose to display the money to the reporters and public in the form of a large pile of bank notes. 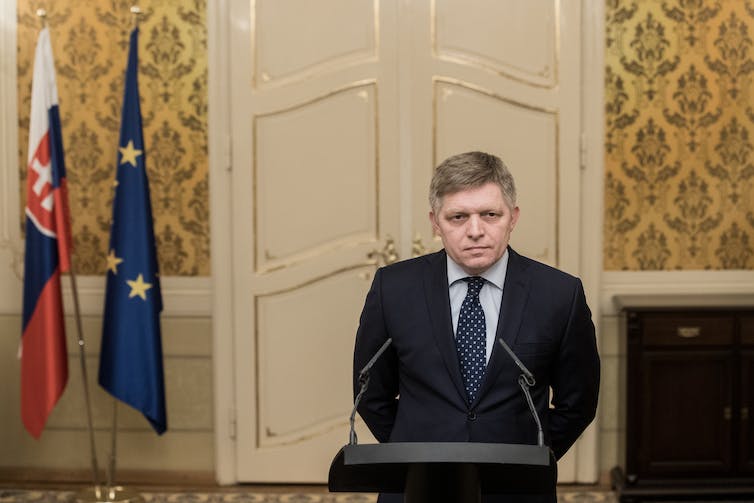 The incident was widely criticised as an arrogant and vulgar piece of political theatre. It turned out to be the first of several political miscalculations leading to a complete loss of the ruling coalition’s moral and political authority.

The second came just a few days later when SMER-SD’s junior coalition partner, the Most–Híd party, broke rank and demanded Kaliňák resign. Kaliňák refused. His recalcitrance opened a rift between Fico and president Andrej Kiska, a political independent. The latter called for a substantial cabinet reshuffle or early elections. The former responded by accusing the president of conspiring with the Hungarian-American billionaire George Soros to undertake a coup d’état. The comments were met with derision by both the press and the public, and caused a rift between Fico and his coalition partners.

Faced with the ruling coalition’s blatant unwillingness to relinquish power, the public cast aside their usual conservatism and political apathy. Under the banner “for a decent Slovakia”, citizens gathered in 48 towns on March 9 to call for an independent investigation of the murders, and for Kaliňák to resign. In Bratislava alone, 60,000 people turned out to demonstrate – the largest gathering of citizens since the Velvet Revolution overthrew the government of Czechoslovakia. These protests have highlighted the breakdown in trust between the public and political representatives.

Even this did not satisfy the Slovak public. Protesters gathered in bigger numbers two days later to demand early elections. Speaking at the protests in Bratislava, the former speaker of the Slovak parliament, František Mikloško reminded the crowd that popular movements had overthrown the Slovak government before – namely in 1989. “The revolution started by the parents has to be finished by their children,” he declared, as the audience held their house keys aloft and shook them – a gesture associated with the Velvet Revolution.

But while the protests constituted a public vote of no confidence in SMER-SD, which has dominated the Slovak political scene since the mid-2000s, the prospect of meaningful change in the immediate future is small.

Before resigning, SMER-SD secured a parliamentary mandate for Pellegrini to form a new cabinet, which crushed public hopes for early elections. Fico remains head of SMER-SD, leading to the widespread perception that Slovakia will now be governed by what is effectively a puppet cabinet until the next elections in 2020.

Even if Slovaks were to successfully force the early fall of the current governing coalition, they face a stark choice. The liberal political opposition is small and fragmented. The latest opinion polls also show that the crisis has pushed more voters towards support for parties with strong nationalist, right-wing orientations.

While protests have been read by some as a recommitment to Western democratic values and a step away from the populism and “illiberal democracy” of neighbouring Poland and Hungary, it seems that for now, the revolution will have to wait.

Robin McAlpine – When People say the Coronavirus has Changed the World, This is What they Mean

It is time to drop all those lovely neo-liberal illusions. The coronavirus has returned us to reality. Let’s remain there. It’s a good place to be. Robin McAlpine is the director of the Scottish think […]

1.2 million people living in Austria do not have the right to vote. What does this mean for them? And what does it mean for the future of democracy in Austria? Edith Meinhart is a […]