Scotland’s independence referendum started a democratic movement, led by its own values and not the dictate of a political party…and it is still going.

Chris Bambery is co-author of Catalonia Reborn (Luath Press, May 2018). He has written a number of article for BRAVE NEW EUROPE concerning Catalonia 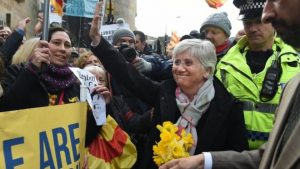 We know of course that box was well and truly opened in Catalonia and shows no sign of being closed any time soon.  But since the Spanish crackdown in Catalonia, which begun with Rajoy sending in paramilitary police to try and physically stop the 1 October Catalan referendum on independence, events there have revitalised the independence movement in Scotland.

The most dramatic evidence for this is the unprecedented response by Spain in issuing a European Arrest Warrant for Clara Posanti, former Catalan Minister of Education, who moved from exile in Belgium to resume her Professorship at St Andrews University. In just 24 hours over £200,000 was raised via Crowd Funding for here defence.

But the response of the Scottish Government gathered pace too as it became clear there was widespread anger over the threat to have Posanti deported to Spain to face charges of fomenting rebellion. Initially it had stressed the issuing of such a warrant was not a matter for the Scottish courts and police, as they were powerless to intervene, but by Tuesday of last week (27 March) the response had become much more robust.

“We have today been in touch with the Spanish embassy and the Cabinet Secretary for Culture Tourism and External Affairs is writing to the Spanish ambassador to express the Scottish Government’s regret at the issuing of a European arrest warrant to members of the former Catalan government and re-elected members of the Catalan parliament. The fact that our justice system is legally obliged to follow due process in the determination of extradition requests does not change those views.”

Accordingly Scotland’s Foreign Affairs Minister, Fiona Hyslop, wrote a letter to the Spanish Ambassador to the UK, while the Scottish Government is to express its concerns over the use of European Arrest Warrants in such cases to the European Commission.

The Spanish Government was quick to point out the Scottish Government is in the hands of the pro-independence Scottish National Party so what else would one expect. Similarly it dismissed the protests which have taken place outside the court in Edinburgh when Clara Posanti was charged. She was released on bail, in Glasgow and at St Andrews University. The authorities there were supportive of Professor Posanti.

Yet in an unusual move two Labour and two SNP MEPs wrote to the EU Commission vice president Frans Timmermans, who is responsible for human rights, saying European arrest warrants issued for Ms Ponsati and other Catalan politicians was “deeply concerning,” adding:

“We wish to make clear to you that we believe that the measures being taken by the Spanish Government in regard to Catalonia put at risk the core values of the EU such as freedom of speech and assembly.”

Scotland has six seats in the European Parliament; the other two are shared between the Conservatives and the UK Independence Party.

It’s an unusual move because Labour and the SNP are usually at daggers drawn. Labour held a majority in Scotland for decades before being supplanted by the Nationalists.

The extradition hearings will be held in a Scottish court under Scottish law, both of which are separate from those in England. A European arrest warrant requires Scotland to have a similar law to that under which Spain is charging Professor Posanti. There is no law of rebellion or sedition in Scotland. The outcome of this case will be of interest, not least in Germany where Carles Puigdemont is being held under the same arrest warrant.

Prior to Spain’s crackdown in Catalonia last October it would be true to say that supporters of Scottish independence were somewhat down at heel. Scotland’s First Minister had pledged a second independence referendum over the UK’s final Brexit deal but then backed away from that when it became clear that was not setting the heather alight. In the June general election for the UK Parliament the SNP took a hit. Two years before they had won 56 of Scotland’s 59 seats at Westminster, which was cut back to 35. Among the casualties was former First Minister Alex Salmond.

The SNP is not the only Scottish politic party supporting independence, that includes the Greens and the radical left, but the relative success of the pro-Union Conservatives, taking 13 seats, their best performance north of the border in quarter of a century, left a bitter taste.

As delegates gathered in Aberdeen last October for the SNP annual conference there was little excitement. Catalonia changed that. Two SNP MPs and a member of the Scottish Parliament had been international observers of the referendum and were shocked as the Guardia Civil smashed their way into polling stations, assaulting those waiting to vote and seizing ballot boxes. Many others had travelled from Scotland to show solidarity with Catalonia’s pro-independence movement, including a delegation from the SNP’s youth wing. Back home protests took place on the streets across the country over the attacks.

At the SNP conference the Catalan Delegate to the UK got a standing ovation and an emergency resolution was passed decrying the violence meted out by the Rajoy Government.

Since then the jailing of Catalan pro-independence MPs while awaiting trial, of two leaders of the two main Catalan civil organisations, the flight into exile of the Catalan President, Carles Puidgemont and other ministers, the refusal to move the prisoners to jails in Catalonia, the imposition by Rajoy of direct rule and the victory of the pro-independence parties in the December elections called by Madrid has meant Catalonia remains on the front burner in Scotland. The latest batch of arrest warrants and jailings has only fuelled that.

Solidarity from pro-independence Scots for their comrades in Catalonia is perhaps not surprising, but it has truly revitalised the independence movement in Scotland, independent from the SNP led Scottish Government.

Last November an Independence Convention in Edinburgh drew 2000 people. Across the country the broad based Yes Groups which had been formed during the 2014 referendum came back into life, not yet on the same scale as then, but drawing large turn outs across the country.

On a weekday in late March thousands of people came to Edinburgh to encircle the Scottish Parliament in a “Hands Off Our Parliament” protest over fears the Westminster Government of Theresa May was out to take back powers devolved to Scotland.

As yet this is not on the scale of Catalonia, but it is proof that the Pandora Box Rajoy warned of remains open not just in Catalonia but in Scotland too. Support for independence now stands at around 45 percent in the polls, compared to 30 percent at the outset of the last independence referendum campaign.

“For this holiday season, I will give three big items that are apparently too simple for economists to understand.” Especially interesting in point 3! Also an article for non-economists Dean Baker is a Senior Economist […]

Richard Murphy – Then world is heading for catastrophe. What can we do? Well, quite a lot actually

Where there is despair, there are thinkers who keep their eyes on real solutions Richard Murphy is an economic justice campaigner. Professor of Accounting, Sheffield University Management School. Chartered accountant. Co-founder of the Green New […]