On June 21 the Parliamentary Assembly of the Council of Europe approved a resolution arising from a excoriating report calling for the release of the pro-independence prisoners in Spain, an end to the persecution of the politicians in exile, and a series of other recommendations on the Catalan conflict. 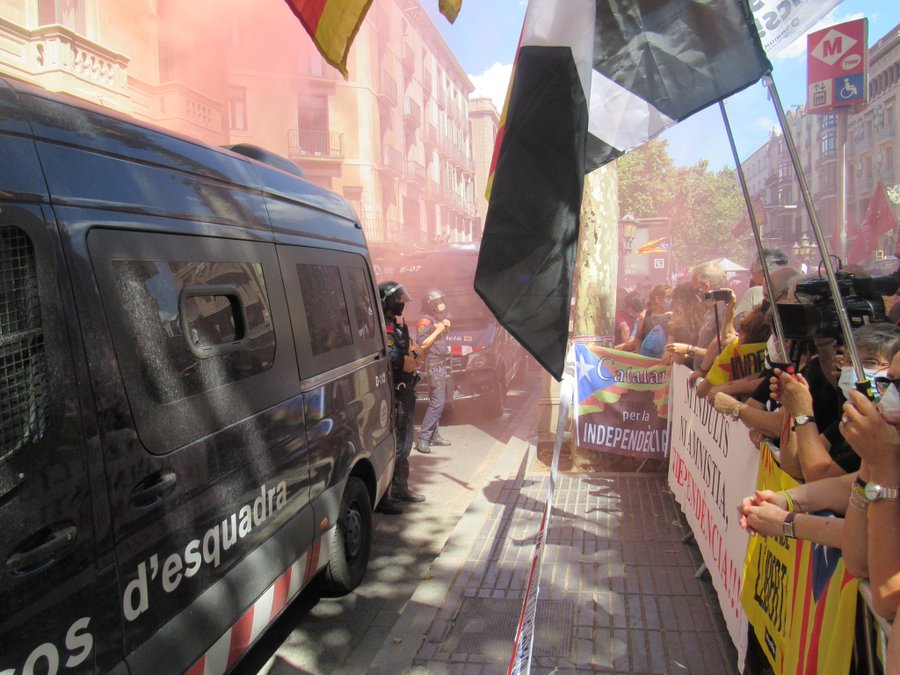 After three and a half years in prison, the nine Catalan political prisoners tried in 2019 for having organized the October 1 2017 Referendum were freed last Wednesday. While the right and far right are raising hell about the fact they “only” served three and a half years of their 9-13-year convictions, the Madrid government is congratulating itself for its magnanimity and sense of reconciliation. But what is the real reason for what by some is seen as an early move by Madrid? Was it “magnanimity” and “reconciliation” ?

The answer will undoubtedly be found in events happening at the Council of Europe headquarters in Strasbourg the very same day Sánchez was staging his clemency act at the Liceu opera house in Barcelona (a ceremony not one member of the Catalan government attended. The evening event, which the Spanish media have given very scanty coverage to, was the plenary session of the Parliamentary Assembly of the Council of Europe. Sizzling on the Council’s order of the day was a harsh resolution against Spain for the unjust way it had treated the convicted Catalan leaders, demanding their immediate release and the cease of hostilities against the Catalan indy movement in general. Although in his speech Sánchez made absolutely no reference to this up-coming event, even a poor political analyst would grasp the link between the two items. Sánchez, fully conscious of the embarrassment the Council of Europe’s resolution would cause Spain, had seen the need to chip in with an emergency pardon to try and save face. He obviously must have understood that it was one thing to have ignored U.N. rapporteur Fernand de Varennes’ similar condemnation of Spain the year before and quite another to turn a blind eye to a new devastating resolution by the Council of Europe. Sánchez is no fool and must have known that even 80% of the members of his own socialist group at the Council of Europe were going to vote against him. Spain may be renowned for a thick-skinned immunity to international censorship regarding her democratic deficiencies, but Sánchez obviously saw the urgent need to distance himself from the harsh position of Spain’s Supreme Court in this case.

Not that he had ever felt that need before, mind you. The cynicism displayed by Sánchez in this hurried operation must be seen to be believed. During the whole of the last election campaign Sánchez had rivalled with the right and far-right parties in showning unlimited hostility towards the Catalan indy movement. He had promised to see out the long prison sentences for Catalan leaders (nine to thirteen years) and bragged about being the prime minister that would have president Puigdemont brought back to Spain and hauled over the coals. Indeed his party has been particularly active in getting the immunity of MEPs Puigdemont, Comín, and Ponsatí waived and will almost certainly continue to do so. Although talks have obviously been under way between Sánchez’s government and the senior government party, ERC, there appears to be no guarantee that the prosecution and repression of the 3300 Catalan activists currently facing charges will cease. No day goes past without convictions and fresh charges being raised.

In the pro-independence camp, Sánchez’s pardons have also been received with mixed feelings. Although former vice-president Junqueras speaks of a “triumph” of the independence movement in forcing these pardons, former president Puigdemont denounces the emergence of a sinister “spirit of the Liceu” that he sees as a threat to the spirit of the First of October. Puigdemont sees it as a government strategy to “neutralize” the independence movement and set the scene for the intensification of repression against the more active sectors of the movement once Sánchez has earned himself a good name in Europe by freeing the nine leaders. It cannot be forgotten that once “pardoned”, several of the former government leaders will still be facing hefty economic sanctions(up to €10M) that threaten to ruin their families, as is the case of former Harvard professor Andrew Mas Collell in the case reported last week in Brave New Europe. Since then, thirty-one Economics Nobel Prize winners have come out with a letter in his defense.

The real reason behind the pardons

There is little doubt, then, that the “magnanimity” shown by Sánchez was stimulated by the up-coming Council of Europe’s resolution. It had been drawn up by Latvian socialist Boriss Cilevic who had been very reserved in his drafting of the document. The report is a bombshell for the Spanish State, condemning the way in which it imprisoned and persecuted pro-independence leaders in Catalonia and also those in exile, as well as persecuting high-ranking Catalan government officials, amongst whom is president Quim Torra. The text calls for the immediate release of “political prisoners”, a term that Madrid has always rejected. Furthermore, at the plenary session, all the amendments made by the Spanish parties were turned down. The conservative Partido Popular and Sanchez’s social democrats’ (PSOE) joint drive to water down the document was defeated by a large majority of 70 votes to 28, and has been seen as one of the major victories to date for the Catalan indy movement.

However, what most worries the Spanish state lawyers about Boriss Cilevic’s 30-page report are the four pages that delve into the accumulated jurisprudence of previous cases justifying a conviction for Spain. It accuses Spain of having violated a number of fundamental rights of the Catalan prisoners. Furthermore, Cilevic insists that it is the European Court of Human Rights (ECHR) that must examine and resolve the appeals made by the Catalan political prisoners, some of which have already reached the Strasbourg court despite Madrid’s Supreme Court’s attempts to stall them.

It cannot be overlooked that the ECHR is organically dependent on the Council of Europe. In addition, we must remember that Boriss Cilevic himself was chairman of the Commission for the Election of ECHR Judges between 2016 and 2018, so there is little doubt that he is fully acquainted with both the institution’s modus operandi and the jurisprudence applied in the court. On close scrutiny, many of the arguments included in the report seem difficult to refute from a legal point of view. Together with the report presented last year by UN rapporteur de Varennes, the two documents conjure up a bleak prospect for the Spanish politicians and judges who have shown such a blind obsession in persecuting the Catalan indy movement. The ECHR now has the chance to prove to Spain that revenge and unquestioned national unity cannot be taken as criteria for the application of justice. Indeed, with this new resolution, the Spanish judiciary will find a new obstacle it will have to contend with if it aims to continue maintaining Spain’s status as a respected state ruled by law. Not only will Sánchez find it difficult to convince the Catalans of his “magnanimity”. He may also find that his pardon campaign will have contributed little to solving the Catalan conflict once it is known that it was undoubtedly prompted by a CE resolution that questions the very need for that pardon.

The scandals in Spain’s justice system continue making Hungary and Poland look like paragons of democracy Toni Strubell  is a former MP in the Catalan Parliament, journalist, and author of What Catalans Want Núria Bassa […]

Dean Baker – Beating Up On Finance