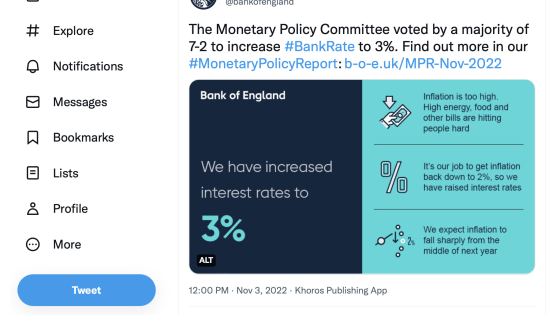 As central banks started to employ communication as a core part of their monetary policy toolkit in the early 1990s, they primarily targeted expert audiences such as financial market participants, academics, policymakers and specialised media, rather than the wider public (Blinder et al. 2005, Assenmacher et al. 2021, Blinder at al. 2022). Although this strategy has been largely successful in explaining monetary policy decision to expert audiences, communication with the general public has lagged behind (Ehrmann and Wabitsch 2021).

In recent years, major central banks are increasingly relying on the more direct channel of disseminating policycommunication through their websites and social media accounts. To this end, central banks have made their websites more user friendly – through, for example, educational resources and tools – and have also strengthened their presence on social media platforms such as Facebook, LinkedIn, and Twitter (Gorodnichenko et al. 2021, Ehrmann and Wabitsch2022). In a recent paper, we explore recent efforts by central banks to engage with a wider audience via Twitter (Masciandaro et al. 2022), which seems to be a channel that can likely influence macro phenomena, as political elections (Fujiwara et al., 2020).

Table 1 provides information on the number of followers recorded on the social media platforms of the G20 countries’ central banks as of September 2022. Twitter appears to be the most popular social media channel for most of the central banks, with the exceptions of the Reserve Bank of Australia, Bank of France, Bank of Italy, and the South African Reserve Bank, which are mainly followed on LinkedIn, and the Bank of Korea, which is more popular onFacebook.

To provide more detail on how central banks use social media as a communication tool, we use the Twitter Academic API to extract all the Twitter messages generated by G20 central banks since the creation of their accounts. For each tweet, we extract the text, date and language of the tweet as well as the number of likes and retweets. We end up with a database of 215,011 tweets (excluding retweets) sent between June 2009 and September 2022.

Yet, the number of tweets only measures the effort made by central banks to draw attention to their communication. Another important aspect to consider is the public engagement with the social media posts of central banks, which can be derived, for example, from the number of likes and retweets. The last two columns of Table 2 provide information on the average influence of the central bank tweets. The Saudi central bank has the highest average number of retweets per tweet, followed by the Bank of Japan, the Federal Reserve System and the ECB. The Bank of France, Bank of Korea and Bank of Russia have the lowest average engagement per tweet.

We then investigate the content of individual tweets to understand if certain topics are associated with a higher public engagement. To do so, we first translated all the tweets written in a language different from English by using Microsoft Translator (138,667 tweets, or 65% of the sample). We then extract a random sample of 5,000 tweets and manually classify them into nine different topics: banknotes, bulletins and reports, data releases and statistics, exchange rate information, monetary policy, other information, replies to tweets, research and conferences, and speeches and interviews.

After this classification, we compute the set of the most frequently used unigrams and bigrams terms for each topic, and we use them to further classify the remaining tweets. This procedure allows us to classify a total of 89,343tweets, or 42% of the sample.

Table 3 shows the distribution of the classified tweets across the different topics, together with the most frequent words associated to each topic. Using this classification and looking at the ten most liked and retweeted tweets, we find that all of them were made to announce the introduction of new coins or banknotes.

Using these data, we analyse which topics are associated with greater public engagement. Our results suggest that banknotes announcements attract a disproportionally higher number of retweets as compared to tweets related to all other topics. In addition, tweets discussing monetary policy decisions and operations also attract a significantly larger reaction from Twitter users.

All in all, our analysis confirms that central banks are increasingly engaging in social media as a regular feature of their communication policy. Future research can delve deeper into the analysis of high frequency social media content as a tool for measuring market expectations and the effectiveness of central bank communication. Another avenue for future research is the role of social media presence of monetary policy committee members, who have also significantly increased their efforts to engage with the wider public.

Yanis Varoufakis – How the West poisoned its money

Capitalism conquered the world by commodifying almost everything that had a value but not a price, thus driving a sharp wedge between values and prices. It did the same to money. The exchange value of […]