By Oliver Davis, University of Warwick 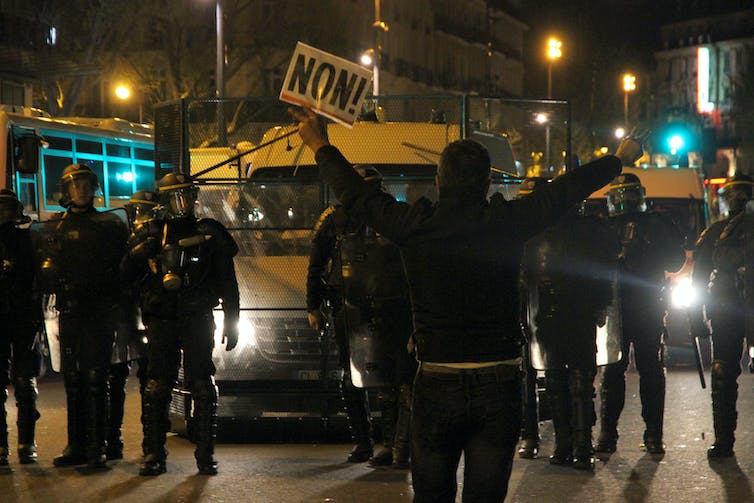 Historians of the May 1968 protests may have rebuffed Emmanuel Macron’s outlandish proposal for an official state commemoration of the imminent 50th anniversary, but it seems the president is gearing up for his own anti-celebration: total war on France’s social settlement.

Students, environmentalists, refugees, railway workers and workers generally are all under concerted attack by a president who is ready to use the police to force through his neoliberal agenda. In July 2017, he invested €22m in teargas and his shock troops have been making ample use of it in recent months.

Macron’s is a war on many fronts but resistance has perhaps been fiercest to his changes to employment law. In Paris, Nantes and other major cities, attempts by the previous Hollande administration (under which Macron served) to force changes to French employment law through parliament led to violent demonstrations through 2016 into early 2017. Police responded with violence against demonstrators, bystanders and reporters.

Meanwhile, Macron’s changes to the French university system to introduce a limited form of competitive selection have met with campus occupations and other protests across France, which Macron has countered with police violence. His “reforms” to the SNCF, the state-owned national railway company, are intended to ready the network for competition under EU rules. Macron’s ministers have messaged intensively around the company’s debt, which is significant but comparable to that of other major network operators, and what has been largely misrepresented as the exorbitant special privileges of France’s railway workers (“les cheminots”), who are thereby cast in a role similar to the miners in Margaret Thatcher’s earlier drama of neoliberal conquest.

Some relish this as “Macron’s Thatcher moment”. Yet there are decisive differences which make Macron’s war on many fronts much more of a gamble. Most significantly, perhaps, the French police lack the tactical means and the moral authority necessary to quell the ire of several segments of the population converging in concert. And in this, today’s protests have much in common with May 1968.

French police have a longstanding reputation for using excessive force, especially against citizens from ethnic minority backgrounds, migrants and protesters. A series of incidents of police brutality going unpunished led Amnesty International to denounce a “pattern of de facto impunity” in 2009, with politicians and officials usually far too quick to cover frontline officers. Analysis of complaints against the police in the late 1990s and early 2000s by sociologist Cédric Moreau de Bellaing pointed to an institutional culture which not only condones but encourages the use of violence on the job.

The situation has hardly improved in recent years. In July 2016, after the death in police custody from asphyxiation of Adama Traoré, on his 24th birthday, the family of the deceased struggled to get officials to investigate the incident properly. They commissioned a second autopsy, which indicated that the official verdict on the cause of death was unreliable.

In February 2017, a police officer “accidentally” pushed his baton 10cm into the anus of 22-year-old Théodore L during a violent struggle to arrest him. This caused injuries sufficiently serious for Théo to be signed off work for two months and sparked another wave of protests.

Since the dismantling of the Calais migrant camp in October 2016, police have conducted a very aggressive and arguably racist operation to forcefully dissuade migrants from returning to the area. The operation is largely financed by the British government, which is outsourcing its security dirty work to French officers. This has involved sending riot police to prevent volunteers feeding migrants outside a 75-minute evening window and pepper-spraying young migrants’ sleeping bags.

Demonstrations against police violence, discrimination and changes to employment law began to converge in 2016 around the slogan “Tout le monde déteste la police” (“Everyone hates the police”). Protests were increasingly marked by the turbulent presence of militant black bloc groups attacking police and property belonging to big corporations. Such groups originated in West Germany in the late 1970s in response to mounting police violence. They have become an established part of anti-globalisation demonstrations, most recently at the G20 in Hamburg, and are now very active in France.

Police unions have countered the perceived anti-police sentiment by marching in their own protests against the rise of what they term “la haine anti-flic” (“anti-cop hate”). Yet by no means everybody in France hates the police. They experienced a significant upsurge in public support within the general population after the January 2015
and November 2015 terrorist atrocities and have themselves been directly targeted by terrorists. But the European Social Survey (2010) suggested that a majority of 57% agree that they treat citizens from ethnic minorities less well. This compares with 37% of German respondents to the same question about their police – a staggering gap.

Unsurprisingly, the suburbs remain particularly hostile, where the police are very visible symbolic representatives of a state which is seen to operate on the ground less by integrating minorities (its official policy) and more through routine practices of “ordinary humiliation” by overusing the hated “contrôles d’identité”. These are checks by police of identity documents, which must by law be carried at all times in public. The practice disproportionately targets ethnic minority citizens in a manner recalling abuse by British police of “stop and search” powers.

Sociologist Didier Fassin’s study of one paramilitary-style policing unit in the suburbs also revealed evidence of significant far-right affiliation among rank-and-file officers. Hostility in the French suburbs has fuelled Islamist radicalisation and made it more difficult for the police to gather intelligence on homegrown terrorist attacks.

The French police are capable of change. A good place to start, as political scientist Sebastian Roché argues, would be an overhaul of basic training to refocus recruits’ priorities on the need to inspire public confidence in them as impartial servants of the public good, rather than paramilitary enforcers of political order.

But this doesn’t seem likely in the current climate. Macron’s use of the police to impose his neoliberal “reforms” across several sectors damages the capacity of the police to build public trust. Yes, there are many courageous, public-spirited, individual police officers serving in France. Yet even those academic specialists of French policing generally favourable to the police admit that its forces as institutions are already held in alarmingly low esteem.

Macron’s reliance on his police to violently suppress the social unrest created by his own aggressively neoliberal programme risks effecting a convergence of protests around anti-police activism. And this is exactly what happened in May 1968.

This may be about Scotland, but it is relevant for everywhere. A Green New Deal is not just a programme, it is a revolution – to the betterment of us all. The question is if […]

There is a rise of authoritarianism as several political parties, many state institutions, and a large portion of the public feel no loyalty to the their democracy, or believe in its legitimacy, or are prepared […]

Andrea Capussela has the courage to address probably the greatest threat to democracy in Europe: corruption. One can safely claim that in Germany there is hardly a major law or government contract, which is not purchased […]