Today French rail workers launched three months of strikes in what threatens to become the largest  industrial action against Emmanuel Macron’s drive to privatise and liberalise the state railway. Last year, during the campaign for the French presidential election, Emmanuel Macron claimed a centrist position, distancing himself from both “Thatcher and Trotsky”. Allegedly less fanatical than the ultra-liberal candidate François Fillon, Macron seemed to avoid the spectre of the Iron Lady. One year later, however, the new President has achieved the deregulation of French Labour Laws. According to Paul Malgrati, such radicalism in opposing workers’ rights reveals  the real Thatcherite component of  Macron’s politics.

Paul Malgrati is a founder of the website The New Pretender and teaches History at St. Andrews University

Cross-posted from our cooperation partner The New Pretender

Beyond political anathema, the comparison between Emmanuel Macron and Margaret Thatcher is justified by the comparative history of British and French trade-unionisms since the early twentieth-century. While British trade unionism counterbalanced the lack of labour regulation in the UK with huge grassroots membership in factories and workshops, French trade unionism  could avoid resorting to mass trade unionism thanks to the labour laws of the French Republic. Despite such diverging histories, Thatcher and Macron can be compared by their respective attempts to break the traditions and norms that allowed trade unionism to flourish in their respective countries. On the one hand, Thatcher destroyed the traditional means of recruitment and action of British Trade Unions. On the other, Macron undermined French collective agreements and bargaining legislation. Thirty years apart in time, on both sides of the Channel, the conservative revolution has taken two different paths towards the same destination, which is the neutralisation of Labour’s power against Capital.

In other words, the seminal role played by Margaret Thatcher in undermining the structures of British trade unionism has been reproduced by Emmanuel Macron in the French context.

The British case: uprooting the unions

British trade unionism essentially developed without the assistance of State regulations. In line with the British tradition of common law, there has traditionally been no general “right to strike” or “trade union rights”, strictly speaking, in the UK. According to the Trade Dispute Act of 1906, activities such as strike actions and unionisation are simply “exempted” from the common law which, until then, condemned them as “conspiracy” again social order. Traditionally, and besides few (mostly recent) exceptions, such general rights to engage in trade unionism and work conflicts do not exist in the UK. Only a precise set of practices is tolerated by the state and courts, which, most of the time, do not interfere in labour conflicts.

As a result, collective bargaining between Labour and Capital does not have the same status in Britain as in France. While, across the Channel, the negotiations between unions and bosses take the form of official “collective agreements” that prevail, in accordance with the hierarchy of norms, on the individual employment contract, British “collective bargains” establish an agreement whose application depends not on the law, but on the willingness of the parties involved. In other words, while the French law protects the systematic application of the results, British workers can only enforce the agreement by keeping the balance of power in their favour.

As a result, throughout the 20th Century, the best way for British trade unions to enforce collective agreements was to maintain the power struggle with bosses within each company and each sector. This strategy was first made easier by the legalisation of closed shops in the Trade Dispute Act of 1906. Closed shops allowed trade unions to control recruitment by forcing the employer (or sector) to only hire trade union members. Because it maintained the power balance with bosses over time and through entire sectors of activity, the closed shops system quickly became the keystone of British trade unionism.

Besides, the capacity of British trade unions to protect workers in organised companies was strengthened in 1919 and 1945 by the creation of Industrial and Wage Councils. These gathered workers’ and employers’ representatives to foster bargaining on wages and working conditions over a whole industrial sector (including unionised and union-less companies). Once again, none of the agreements reached in these Councils had a legal or regulatory status. However, the capacity of trade unions to establish closed shops in several companies of a particular industry was enough to maintain a positive power balance over the whole sector, thus securing the enforcement of collective bargains. 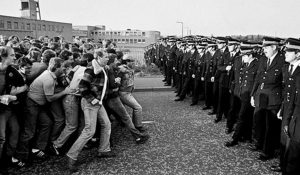 The disruption of this fine balance, between the non-regulation of Labour, on the one hand, and the power of trade unions, on the other, was the result of Thatcherism. From 1979 to 1997, sucessive Tory governments broke with the neutrality of the British State regarding labour disputes. In 1982, solidarity strikes between companies were prohibited and brought back under the status of “conspiracy” of the 19th century jurisprudence. Devoid of the legal capacity to launch a general strike, British trade unions could not rally behind the miners during the social movement of 1984 — an incapacity which fostered Thatcher’s victory. Furthermore, in the early 1980s, closed shops were submitted to a referendum in all the sectors and companies in which they were implemented, before being finally abolished in 1990. Further still, Wage Councils were progressively removed between 1982 and 1992. Deprived of all the traditional instruments which had enabled confrontation with bosses, British trade unions have struggled to get a second wind in the wake of Thatcher’s mandate. Today, they have lost most of the bargaining power they once had. 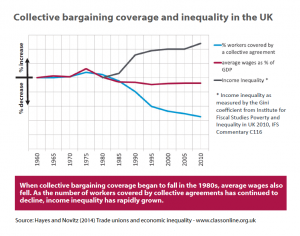 The French case: the destruction of the social Republic

Instead of British labour traditions, French disputes between Capital and Labour have always been regulated by law. From the right to strike in 1864 to the trade-union right of 1884 and from the 1910 Labour Code to the 1946 Constitution that safeguards the participation of workers “in the collective determination of working conditions and the management of companies”, the French Law was always clear in stating trade unions’ prerogatives — far from the British system where unionism is still threatened (at least on paper) by a come back under the ”conspiracy” clause of the Common law.

The French laws of 1919 and 1936 concerning “collective agreements” (conventions collectives) guarantee the legal status of both sector-wide and nationwide negotiations between workers and bosses. Those negotiations can be cemented into the Labour Code and adapted to the requirements of each sector of activity. Quite differently from the British system —where the perennial enforcement of collective bargains depends on the capacity of trade unions to maintain a lasting power balance — the French law automatically enforces collective agreements over each sectors of activity. This is called the “hierarchy of norms” — according to which the national law prevails on sector collective bargains, which in turn prevail on the rules set forward by each company of the sector. The importance of collective agreement is also reinforced, since 1936, by the possibility for the Ministry of Labour to extend the results of collective bargains from one sector to another. This makes the work of French trade unions considerably easier, since their action can indirectly benefit unorganised companies and branches.

The achievements of French Trade-Unions, moreover, is protected against the eventuality of reactionary laws. Indeed, since 1936, the Labour Code includes the principe de faveur (“favourability principle”) which establishes that collective bargains may infringe upon  the French legislation provided they offer “conditions that are more favourable to workers” (article L. 2251-1 of the French Labour Code). 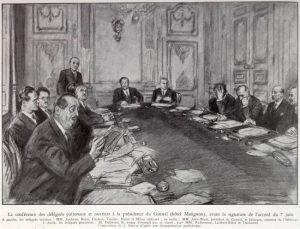 Until today, the many advantages provided by French Labour laws caused French Trade Unions to overlook the need for a mass form of unionisation — one that would cover each companies and sectors of activity. As a matter of logic, closed shops have never been required by French unions, since the balance of power did not need to be maintained after reaching a collective agreement. Closed shops were only necessary in the British context where collective agreements could only apply if trade unions were powerful enough to enforce them.

Protected by the French Republic, French trade unionism has never been a mass trade unionism. Certainly, this is not the result of the alleged “radicalism” of the French labour movement, but it is rather a combined effect of the Labour Code, the hierarchy of norms, and the “favourability principle” which facilitate the enforcement and extension of collective bargains over time. Deprived of a massive army of rank-and-files, as allowed by the closed shops system, French trade unionism would be seriously jeopardised if the system of collective conventions, based on the hierarchy of norms, was undermined.

Predictably, the purpose of Macron’s recent neoliberal laws consists precisely in reversing the hierarchy of norms, thus destroying the keystone of Labour laws à la française. Already considerably weakened by the Fillon Law of 2004 (which enables companies to infringe, under certain conditions, the collective agreements) and the El Khomri Law of 2016 (which enables the employer to depart from the “favourability principle” and the company-wide agreement to prevail on the branch agreement in terms of working time), the hierarchy of norms was finally cancelled by the Pénicaud decrees of September 2017. According to the article 2 of the new Labour bill, the company-wide agreement may now replace the branch agreement, and the branch agreement may now replace the law with regards to the characteristics of fixed-term contracts. Such a breaking with the history of French social rights will without doubt leave trade unions aside. It is therefore no surprise that the decrees authorise small businesses to contract directly with a non-elected employee. Until 2017, for employees of small or medium-sized companies within a sector where trade unions’ activity was strong, there was no need to organise in order to benefit from favourable collective agreements. With the Pénicaud Law, those days are gone and thousands of employees in the small and medium-sized companies are plunging into insecurity, depending on their employer’s will.

In the end, a British trade-union without rank-and-file density, as facilitated by closed shops, is the same as a French trade-union without the hierarchy of norms and the favourability principle: an organisation struggling to protect most workers in front of Capital’s greed. Like Margaret Thatcher, Emmanuel Macron is currently destroying the resistance capacities set up by the State and the trade unions since the beginning of the 20th Century. Following the footsteps of British miners, the French workers must give all they have in the struggle if they want to preserve elementary protection provisions in front of their employer. 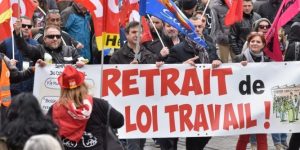 A first battle was lost in September, when the French social movement failed to mobilise effectively against the Penicaud decrees. Today, with the upcoming privatisation of the French railway, a new fight is about to start against the irony and rapacious logic of macronism. Let us hope it will not be the last stand of French syndicalism.

The original version of this article was first published by the French journal Le Vent se Lève in September 2017. It was translated into English by Arthur Borrielo.

The word violence has been institutionalised to serve the interests of capitalism, racism, and patriarchy. Jule Goikoetxea is a Basque professor, writer, and feminist activist What is violence? Starving when there is food. Dying from […]

Franco’s fascist power structures in Spain are alive and well in the EU Toni Strubell  is a former MP in the Catalan Parliament, journalist, and author of What Catalans Want Núria Bassa Camps is a […]