Bulgaria will go to the polls on 4 April for a parliamentary election. Petar Bankov previews the vote and assesses the prospects for each of the main parties.

Petar Bankov is a Postdoctoral Researcher at the University of Glasgow 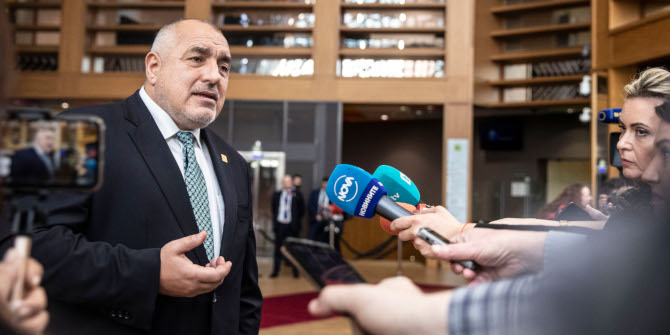 On 4 April Bulgaria will hold its first regular parliamentary election following a decade of snap votes. This election, however, will not spell the end of political instability for the EU’s poorest member state, as it will occur in the aftermath of a major anti-government protest, an ongoing pandemic, and ahead of a key presidential election in the autumn that may redraw the Bulgarian political map.

In fact, such a redrawing is already happening. Contemporary Bulgarian politics remain firmly associated with Boyko Borisov, the leader of the centre-right Citizens for European Development of Bulgaria (GERB). Borisov, who has been Bulgaria’s Prime Minister on three separate occasions, has lost much of his aura following numerous corruption scandals, lukewarm reform efforts, and stalled economic development.

The last year has seen growing friction between the political and economic elites of the country, including a government crackdown against the businesses of the gambling mogul Vasil Bozhkov, a political power struggle between Borisov and the Bulgarian President, Rumen Radev, and a series of leaks and accusations concerning Borisov’s high personal wealth and his government’s alleged use of extortion tactics. These scandals culminated in months-long anti-government protests in the summer of 2020, calling for early elections and Borisov’s resignation. While the protests failed in their aims, they gave a significant boost to some of the main opposition parties.

Meanwhile, the government response to the pandemic has proven ineffective, as its lockdown measures did little to prevent an exponential increase in infection rates and Covid-related deaths in the autumn. Bulgaria’s vaccination rollout has been uncoordinated and extremely slow. The politicisation of the pandemic, however, remains rather limited, as parties have made little mention of it in their manifestoes, although they have included some of the popular faces that have publicly questioned or supported the lockdown measures. The election itself may have a low turnout because of the absence of postal or proxy voting.

The current situation seems to work in Borisov’s favour. GERB is topping the polls, although with lower levels of support compared to the last election in 2017. The past few months have seen Borisov going across the country in his jeep, livestreaming visits to construction sites associated with government infrastructure projects. The party revealed its manifesto only a couple of weeks before the poll with one key message: continuity. Yet, there are potential challenges on the horizon. Its long-standing number two, Tsvetan Tsvetanov, left GERB in 2020 with his loyalists to form a small centre-right competitor, Republicans for Bulgaria. While currently the Republicans are only polling around 1%, Tsvetanov’s strong organisational skills may affect GERB’s performance.

The main political opposition, the centre-left Bulgarian Socialist Party (BSP), is also polling lower than it did in 2017. The party is currently recovering from a prolonged internal battle during which its President, Korneliya Ninova, marginalised her internal critics following her win in a members-wide direct election. Under Ninova, the BSP has become an increasingly conservative party. Its manifesto focuses on the protection of the “Bulgarian family”, improved state support for business, and a progressive income tax as a solution to social inequalities in Bulgaria. In such circumstances, it is questionable to what extent the BSP will be able to mobilise its core supporters.

In contrast, the populist There is Such a People (ITN) is riding a wave of support and sits at around 13% in recent polls. The party emerged following a failed attempt by TV personality Slavi Trifonov to change the electoral and political system of the country through a referendum. ITN offered tacit support to the summer protests via Trifonov’s private TV channel, Seven-Eights TV, which provided heavy coverage. Currently, the channel is voicing strong anti-lockdown views and opinions that deny the severity of the pandemic, which may amplify its performance. Nevertheless, the party manifesto seems to offer more continuity than change: beyond its firm agenda for electoral system reform, ITN’s policy proposals largely emphasise economic prudence and improved business opportunities.

The Movement for Rights and Freedoms (DPS) retains its core support among the large Turkish minority in Bulgaria, having weathered a challenge to its monopoly last time around. The party manifesto contains its trademark liberal policies with focus on an accelerated transition to a green economy and improved use of EU funding. A major absence from its lists is Delyan Peevski, whose election as head of the National Security Agency (NSA) in 2013 caused mass anti-government protests. This suggests that DPS is open to a government coalition.

The liberal right electoral alliance, Democratic Bulgaria (DB), may also enter parliament. Its activism in relation to the summer anti-government protests consolidated the urban liberal vote, and it currently polls around 6-7%. The party campaigns for a Romanian-style judicial reform that ensures judicial independence and enables an anti-corruption crackdown.

Another potential beneficiary from the protests is the centre-left electoral alliance ‘Arise Bulgaria! Thugs Out!’, which is built around Maya Manolova and the formal leaders of the summer protests, the so-called ‘Poisonous Trio’. A former BSP heavyweight, Manolova developed an image as a tough-talking protector of ordinary citizens during her term as the country’s ombudsman. The alliance manifesto focuses mainly on rising personal incomes, stronger support for business and the removal of GERB’s ‘power grab’. While this programme enjoys the support of many former supporters of GERB, the BSP, and the liberal right, it is unclear whether the alliance will manage to repeat Manolova’s strong showing in local elections in Sofia in 2019.

The organised radical right seems set to be the biggest loser from the election. The United Patriots electoral alliance, which entered government following the 2017 election, has collapsed, with the IMRO-Bulgarian National Movement currently polling around the 4% threshold. Beyond numerous policy blunders and internal battles, the radical right has failed to amass large support primarily because most of its competitors have co-opted its views in their manifestos. Most parties promote strong social conservative views and policy proposals that envision the curbing of women’s and minority rights. Aside from this, no party is offering an alternative to the policies of austerity and limited budget deficits, while most manifestoes focus on the continued wellbeing of business with little to no provisions to mitigate the lasting social inequalities or the social effects of the pandemic.

The main question, therefore, is who will govern after the election, as most parties have openly rejected any coalition participation. In such circumstances, Bulgaria will either end up with a coalition based on broken pre-electoral promises, or with an early election in the autumn to coincide with the next presidential poll. The experiences of similar situations from 2001, 2005, and 2014 suggest the former is the most likely outcome. As the BSP’s leader, Korneliya Ninova, is toying with the idea of an internal referendum on the party’s coalition policy, it seems a grand coalition between GERB and the BSP is possible (though this is something she categorically denies). One thing is certain – Bulgarian politics will remain uncertain for the time being.

The euro is not at stake, but the policies that Brussels, with the complicity of national governments, imposed by making the eurozone the area with the lowest growth and the highest unemployment in the developed […]

Commodity traders wreak havoc on global markets and profit from ecological and social devastation. Can they be stopped? Joseph Baines is a lecturer in International Political Economy at King’s College London Sandy Brian Hager is […]