Peter Bofinger approved this draft before the COVID-19 outbreak.

The climate emergency requires massive public investments if we are to avoid catastrophic, civilisational collapse. The irresistible logic of the Green New Deal is starting to collide with the adamantine obstinacy of the economic establishment. Peter Bofinger argues that one of them will have to give.

Peter Bofinger is a Professor of Monetary and International Economics at the University of Würzburg, and was a member of Germany’s five-strong Council of Economic Experts from 2004-2019. This article was adapted from a talk by Professor Bofinger at the University of Texas in Austin’s LBJ School of Public Affairs. The full talk is available on YouTube (here) 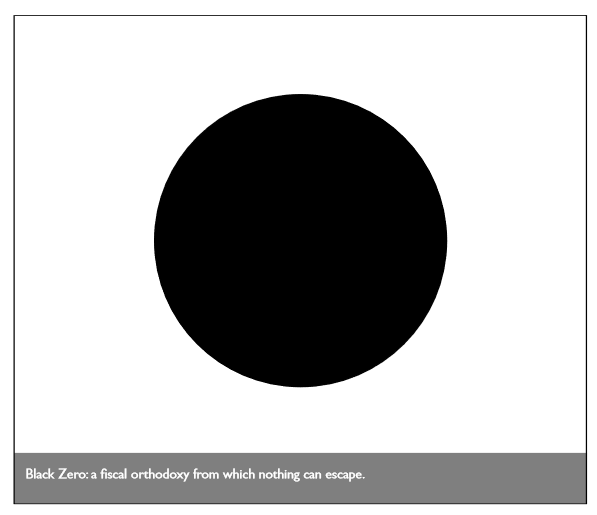 To take climate change seriously, we must completely transform how we generate, transmit and store energy. We need to change the ways in which people and things move around. We must retrofit and refurbish our homes and offices and public buildings, to make them friendlier to the climate. As Jeremy Rifkin has rightly said, we need a Third Industrial Revolution.

This raises a big question. How can we pay for it?

To raise finance on the enormous scale required, only a few options are possible.

The first could be to tax carbon. But the big problem here is that this will tend to make fuel more expensive, which will in turn tend to hurt poorer sections of society the most. When French President Emmanuel Macron tried to impose new fuel taxes in 2018, protests by the Gilets Jaunes (or Yellow Vests) erupted on French streets, eventually forcing him to reverse course. The way around these potentially insurmountable political difficulties is to return the proceeds of carbon taxes (or the revenues from carbon trading schemes, as Prof. Jim Boyce argues in the previous edition of Tax Justice Focus) directly and equally to each citizen, as ‘carbon dividends’. So if such schemes are put in place, the revenues will likely have to flow back to the population, instead of being invested in green projects. Wealth taxes and higher corporate taxes can contribute, but it is unrealistic to rely on them to raise funds at the vast scales required.

Could we finance a third industrial revolution through public-private partnerships, where financial institutions raise the funds to finance green projects?

This may help in some situations, but governments can generally borrow so much more cheaply than private sector actors can, so this is an extremely expensive option. (Elsewhere in this edition, Prof. Daniela Gabor raises additional warnings about relying heavily on private finance.)

The only other solution that is big enough to address the challenge is for governments to borrow to pay for the green transformation. Interest rates are at historically low rates – bonds issued by some governments currently enjoy negative yields. There is no sign of inflation, and ample room for borrowing. So in this environment, government borrowing is by far the best way to pay for the green transformation.

But there is an obstacle. That obstacle is a mindset, which says that governments must not borrow, they must not add to the national debt, and they must not spend more than they receive in revenue. Budget deficits must be zero. We Germans call this Schwarze Null, or Black Zero.

And here is the crux of the current problem facing Europe. If Black Zero says you cannot borrow to invest, then we cannot pay for a credible green transformation, at least without savage, economy-damaging cuts elsewhere.

Yet in Germany there is a broad consensus that, while climate change is important, Black Zero is much more important. We need Black Zero, the thinking goes, to protect our children and our grandchildren from large public debts. Black Zero first, climate second. And Germany is the most powerful country in Europe – so this way of thinking suffuses European policy-making.

Where does this bias against deficits come from? In Germany there are historical reasons for its existence: old memories of hyper-inflation, and more. But in fact, it is taught in standard economics textbooks around the world, and a generation or more of economists has fallen under its spell.

For instance, in his popular book The Principles of Economics, Greg Mankiw says that public debt ’crowds out’ private debt. That is in the main introductory text that millions of students have read, and it’s presented as a fact of life: whenever  a government increases its debt and runs a deficit, this reduces private savings and private investment. The author does not qualify this in any way in this core text book.

But this argument is completely wrong. It rests on the outdated classical logic of a corn economy. The idea is that if a household saves corn, and the government grabs some of that corn, then there is less corn to plant or to eat. That may be true for a household that saves corn. But it is untrue if there is a financial system. The government does not absorb someone else’s money when it borrows and spends. As John Maynard Keynes explained, you don’t have to consume less to get financing: it comes from banks or from capital markets. The financial system creates money. And when the government borrows it spends the money into the economy immediately. (This idea is also embedded in Modern Monetary Theory, by the way.)

Another related theory, known as Ricardian Equivalence, says that the government is like a household, and if it borrows today it must repay it eventually through higher taxes in future years. So, this theory goes, it is kindest to our children to reduce government debt eventually to zero. But again, this makes no sense. If you can borrow money at a one percent annual interest rate, for example, and invest the proceeds in a project that will yield four percent returns, your economy – and likely your children – will be better off. The ensuing growth of your economy means that this productive borrowing could also reduce your debt as a share of your economy. And if you can borrow at negative interest rates – as you can now – this equation becomes even more attractive. Not only that, government bonds are safe assets: people in the financial sector right now are worrying that there are not enough safe assets. To cap it all, there is high demand for green bonds.

The money for a green transformation is there for the taking. Yet this anti-borrowing obsession has been embedded into German and European institutions for decades. For example, in the 1992 Maastricht Treaty that established the European Union it was decided that governments should bring their debts down to or below 60 percent of GDP. But 60 percent is a totally arbitrary number! A doctor who tried to treat a patient on such a basis would be sued. It inflicts pain. If a debt limit means you spend less on the things that matter, then it is almost criminal.

Germany’s climate package approved last December is another case in point. It says that we do not want to tax carbon immediately: we can wait until 2021. If you subtract revenues from trading carbon certificates, Germany envisages spending just 0.2 to 0.3 percent of GDP. This is peanuts. It will not tackle the climate crisis effectively.

China, by contrast, has been running double digit deficits for years (if you include national and provincial government budgets). It has borrowed enormous sums, and spent more on renewable energy in the past decade than the United States, Japan and Germany combined, while enjoying large economic growth at the same time. Especially for large economies, there are almost no limits to the deficits that countries can run.

Public debt is a bit like drinking. Excessive drinking is obviously bad. So what is the right amount?

A good way to decide is to avoid textbook theories and to follow the ‘Golden Rule’ for fiscal policy. If governments make investments from which future generations benefit – as with green investments – why should it pay for those from current revenues? And green investments can be highly productive: if we retrofit the whole housing stock for energy efficiency, for instance, there can be major energy savings, potentially making these investments very profitable in economic terms.

There is more good news here. The Euro area could stabilise its current debt to GDP ratio at around 90 percent, while running a 2.7 percent fiscal deficit, assuming a reasonable nominal GDP growth rate of three percent per year. People are talking about a Green New Deal (GND) requiring €150-200 billion per year, which is just 1.3–1.7 percent of GDP. So we could finance the European GND, with plenty left over or other spending priorities, and without even increasing European debt levels. (And even if we did increase the debt, it would likely harm neither us nor future generations anyway.)

We could increase borrowing in several ways. One would be to exclude green investments from the European Stability and Growth Pact, which forces European governments to curb deficits and borrowing. Another way is to issue Euro-bonds with joint liability, justified by the fact that the climate isn’t a national issue but a European (and global) one. A third way, suggested by Paul de Grauwe, is for the European Investment Bank to issue bonds to finance green investments, and for the European Central Bank to then purchase these bonds as part of its long-term asset-buying programme.s

I only see two potential constraints here. One is labour: massive green infrastructure investment requires a lot of labour that cannot be done by robots. But with widespread automation and digitalisation threatening many jobs, job creation is likely to be highly positive for Europe.

The second obstacle is Germany. The mindset on debt in Germany is rigid, even if some economists are at last starting to think differently. This is the real constraint on financing the Green New Deal.

The money is there. The Golden Rule has never been more appropriate than today, when we have such low interest rates, and even negative rates. Almost nothing can go wrong if we borrow more to finance this productive investment.

If not now, when?

Danny Dorling – When will life return to normal after the pandemic?

Just as important is the question: what was the old normal and do we really want to go back to that? Danny Dorling is Halford Mackinder Professor of Geography, University of Oxford Cross-posted from Danny […]

“You have to have a section on war in today’s books because all of your stories about convergence, divergence, global middle class, r>g and the like can be totally swept away by war, and especially […]