A great weekend read. Do not be put off by the British context. 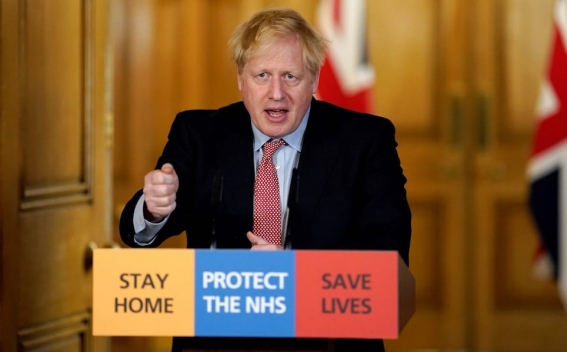 While a recent headline in the Telegraph newspaper happily puts Boris Johnson ‘back at the controls’, I’m willing to bet our noble leader doesn’t know which buttons to press or what happens when you press them. This, at least, has been the view from Europe for a long time. A group of scientists in Spain said our response was putting everybody at risk Andrea Ammon, the director of the European Centre for Disease Prevention said that our progress in tackling the disease relative to other European countries was limited. Given Johnson’s recent history of reckless behaviour, I’m also wondering in which parallel universe the Telegraph headline is meant to be reassuring. At the University of Liverpool, I teach a course in critical thinking and fake news. My hope in constructing that course was that a knowledge of the former would somehow help in the processing of the latter. This hope has proved forlorn. I realise now that it is impossible to change particular types of dogmatic opinion: all you can do is hope that an individual will cleave to them a little less strongly. The phenomenon of motivated and identity protective cognition also means an educational process is not one of spontaneous enlightenment on receipt of new information. It’s important to understand this when thinking about how governments or the public receive scientific information. And it’s important for one simple reason: as Richard Feynman wrote in his review of the Shuttle disaster and all the subterfuge and PR that swirled around it: reality cannot be fooled. And there is such a thing as reality even if Bolsonaro, Donald Trump or Boris Johnson refuse to admit it. What all these people really can’t stand is that they are not in charge of it: the virus is.

The literature of cultural cognition in the understanding of risk does, however, give me a way of understanding the current coronavirus tragedy. Dan Kahan’s work on risk and culture shows how our values shape our understanding of what risks are real and significant and which contrived and overblown. Johnson’s mistake was to confuse the two and the culture that mediated the cognition of the unfolding tragedy was a mixture of arrogance, contempt, anti-intellectualism, coupled with lazy and cynical complacency. Add to this a significant amount of fear, deference, and a refusal to properly question authority (despite all the cornball about ‘freedom loving Brits’) and you produce the perfect storm. These attitudes have become ingrained in British and especially English political culture. There’s a lot of contempt in England towards knowledge and expertise. Or at least there was until the going got tough. After that the head boys (and they are mostly boys) sent in the knowledge workers and hid behind their skirts.

There are huge problems here, although the claim sounds reasonable. It’s important to realise, here, that science itself is not unimpeachable. It takes place in a human context. And science, whether people like Richard Dawkins acknowledge it or not – is a human product. Just like religion. This means it has to exist in a political realm whether it likes it or not. And it is corruptible. Endlessly so. Check out Retraction Watch. Think about the massive development of predatory scientific journals. Now think about scientific progress. It’s not always so speedy. One of the first descriptions of an occupational malignancy was written by Sir Percivall Pott about the soot wart of chimney sweeps. So even centuries ago, there was an inkling that smoke was connected to cancer. Fast forward a few hundred years to the establishment of the grand sounding ‘Tobacco Industry Research Council’. Staffed and stuffed with eminent scientists all of whom were determined to obfuscate and deny any possible link between smoking and cancer. They did it for years. Clarence Cook Little was the chief ‘scientist’ of this group of flunkies and shills, all funded by the tobacco industry. If you look at the cover of Time Magazine in 1937 you will see Clarence all over the front: he’s happily smoking a pipe. In the very process of lighting up. While science might progress technically, moral progress is rather harder to define. Health ‘outcomes’ (what a horrible, pen pushing word) for many sectors of the population have, for far too long, been unjust and unkind and the current and monotonous incantation of the sacrosanct fetish of the minute—science— as in ‘we are following the science’ is, I would argue, partly being employed, not as a way of understanding the issues, but as a rhetorical device to close down debate. Can you give me the papers and the publications? Where are they on PubMed? I’m not a virologist or infectious disease specialist? True, but I know a woman who is and I believe in the social nature of epistemology. So much for transparency. So much for freedom loving Brits.

Fear and trembling and sickness in modern Britain

An act of parliament was established in 1788. It tried to give children hefty largesse. They were not to be employed under the age of eight. Of course, this was long ago and today we live in more enlightened times. Don’t we? That depends. In an extended essay in the London Review of Books, the medical anthropologist Paul Farmer writes movingly about ‘Who lives and Who Dies’ and the iniquities of healthcare funding. Of his work in developing countries, Farmer writes of his growing awareness concerning the political dimensions surrounding the deaths of his many desperately poor patients. ‘But with time and broader experience’, he writes, ‘I was tempted to record the cause of death as ‘weak health system for poor people’, ‘uninsured’,’ ‘fell through gaping hole in safety net’ or ‘too poor to survive catastrophic illness’. Now, I’m sure I don’t need to semaphore the point, but these observations about Haiti, one of the poorest countries in the world, would not be out of place in a certain sceptred isle. In a country that, at the opening of the 2012 Olympics, made a great big song and dance about how it looked after everybody. We can see that’s not true, especially for our BAME (Black, Asian, and Minority Ethnic) friends. And purely medical judgements on the cause of death cover up as much as they reveal. There is the immediate cause and the underlying reality. I have a significant number of Filipino friends, many of whom work in the NHS or social care, and they are dying. I’d like to record the following on their death certificates: ‘were thought not to matter by a managerialist mindset that was all about perception. Were immigrants whom the populace had been taught to despise, even though they were hypocritically ‘clapped’ every Thursday. Were poor. Were black. Were brown. Were old. Were weak. Were thought unproductive. Were neglected. Were lonely. Were isolated. Had a certain postcode. Were unfortunate enough to live in a country that could only feel happy by comparing itself to America, but not fortunate enough to live in a place that wanted comparisons to Germany, South Korea, or Taiwan. Lived in a ‘competitive’ society and a ‘competitive’ economy but didn’t compete on anything remotely important. Didn’t compete on healthcare. Didn’t compete on education. Didn’t compete on social care. Was first among losers with the United States, yet arrogantly kept on trying to weasel out of its lacklustre ‘performance’ by endlessly going on about the ‘complicated’ nature of international comparisons.

‘Aren’t they kind?’ the mainstream media muses about ‘these people’ the Filipinos, who, it’s just noticed, are seemingly ‘dying’ to help us. In Filipino culture there is a concept called Kapwa. It roughly translates as ‘communal belonging’. In England it’s all you: you and yours. Me and Mine. I and me. Heap mountains of debt on the young and sod the old. Warehouse them and throw away the key. Dishonour your past and screw your future. Tweet pictures of yourself clapping NHS workers and examine them on Instagram. That’s the truth and no amount of clapping can disguise it. You voted for it and you’ve gone on voting for it for a long time now. Oh yes, before we forget, back to the Filipinos? It’s also because English managers and administrators —understandably timorous regarding the consequences of whistleblowing – cajole them over their visas. Never mind Vera Lynn and the war. That’s your culture now. Take a good hard look at it.

Are my hectoring judgements unkind? Perhaps. There are decent hearted folk in Britain, but they are not in the ascendancy when it comes to political decisions. Despite neoliberal choice discourse, most people don’t voluntarily ‘choose’ to have their health service run down and their relatives neglected. They don’t ‘choose’ shit jobs in a deregulated, gig economy. They don’t ‘choose’ to work in Amazon ‘fulfilment’ centres where their daily life consists of daily demonstrations of their uselessness. As the great academic philosopher Tony Manero once said: there’s ways of killing yourself without killing yourself. Living in modern Britain, for many people, is one such way. It really is the ‘sick man of Europe’. In Johnson’s death cult we are all going back to work. Soon. The economy needs to be revived? No, that’s people. The economy won’t survive? No, that’s people. The economy is dying? No, that’s people. Even as I write this, Trump is planning to get out the liability free initiatives for employers who make their workers ill. Now that is ‘sick’. That’s how we ‘live’. Some freedom.

In ‘Who Lives and Who Dies’, Paul Farmer states that many of his patients died ‘stupid deaths’. There was a lot of ‘stupid deaths’ and ‘stupid dying’. Now that was in Haiti. So, if the deaths in Haiti were ‘stupid’, what does that make the deaths in a country that could have and should have imagined a better future for its citizens? That’s not stupid. That’s something worse. Far worse. What kind of exculpatory ignorance could forgive such a tragedy? What can we make of a society that suddenly worships a much older man from another generation, who fought for a version of freedom, but at the same time blithely warehouses and mistreats his contemporaries? A society like that is not a society fit for heroes. Perhaps that’s why so many of them are dying? Let’s have the decency to acknowledge this. Please, let’s not roll out the Dulux. Not anymore. If he’s still alive, let’s put Martin Moore-Bick (Chairman of the Grenfell Tower Inquiry) back in his box. No more rediscoveries of the obvious. No more manufactured surprise.

Marshall Auerback – The European Union May Not Survive the Euro

Richard D. Wolff – Why Government Mostly Helps People Who Need It the Least—Even During a Crisis

The government mostly does what its constituents with money and power make it do. Richard D. Wolff is professor of economics emeritus at the University of Massachusetts, Amherst, and a visiting professor in the Graduate […]