In response to a reduction of growth and inflation prospects for 2019, the European Central Bank (ECB) announced new long-term subsidized loans for banks. But why would it work better this time?

For the past few weeks, bad news have accumulated over the Eurozone, leading to fears that the late economic recovery would already soon be over. Today, the European Central Bank’s newest forecasts have confirmed those worries, with a massive reduction in the growth and inflation prospect for 2019: 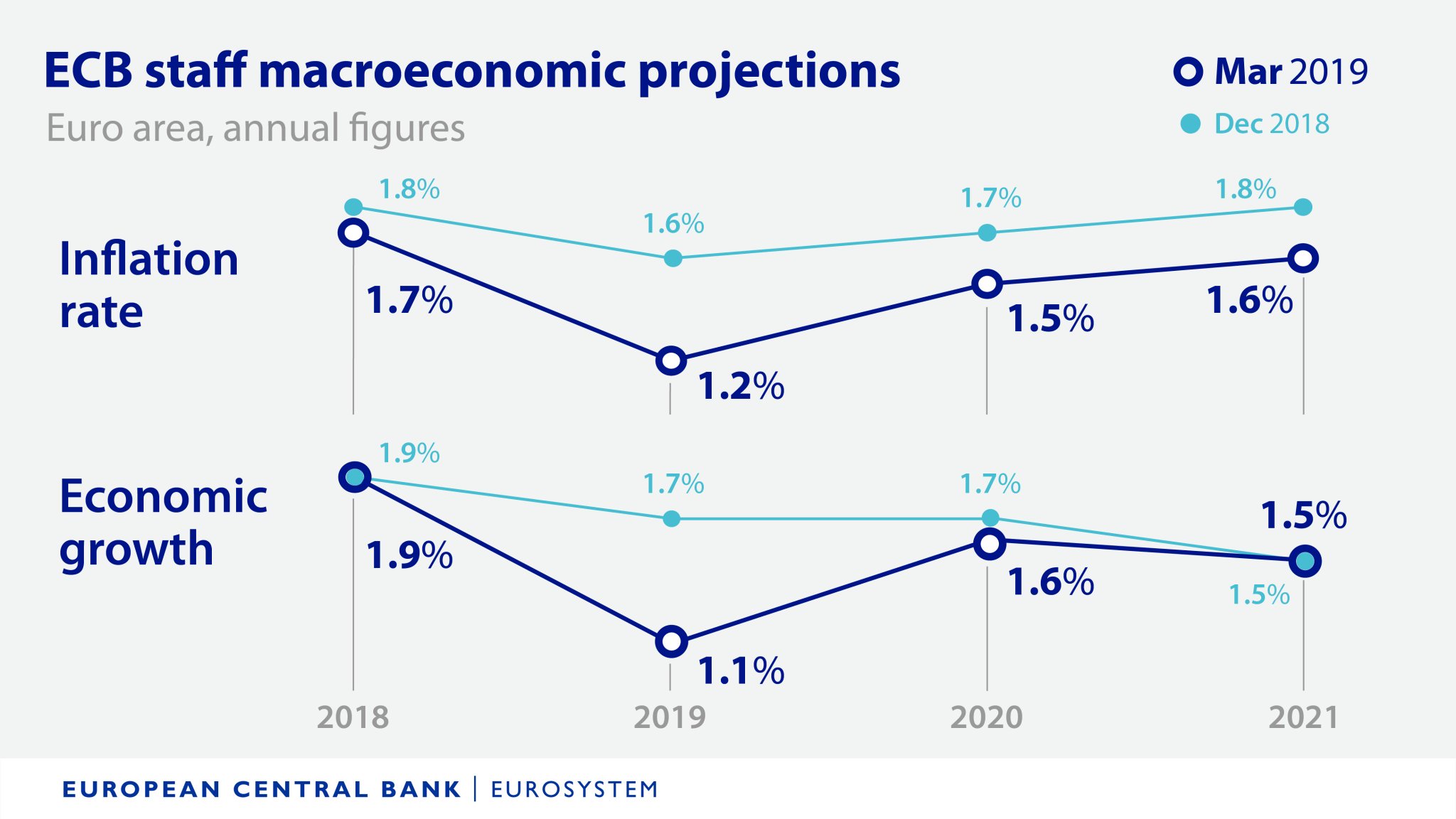 The situation is rather embarrassing for the ECB, since the bank barely paused its gigantic 2,6 trillion euros quantitative easing programme about 3 months ago. After so much money spend to help the recovery, one would expect the Eurozone economy to be on track for a sustainable growth.

Overcoming the embarrassment, today the ECB announced that it would launch in September a new round of so-called Targeted Long-Term Refinancing Operations (TLTRO-III)  – a new version of an old policy first implemented in 2011 and which has been repeated six times since (with different modalities). Hence, today’s announcement comes with a certain taste of déjà vu.

So what are TLTROs?

Under normal times, commercial banks can always access new liquidity at the central bank by pledging some assets as collateral. With TLTROs, the conditions for getting liquidity from the ECB are just easier, cheaper and for longer duration.

The other feature of TLTROs is they are supposed to be “targeted” towards lending in the real economy. In practice, the ECB tries to ensure that commercial banks use the TLTRO money by applying an even lower (sometimes negative) interest rates, if banks can justify they have lent more thanks to the TLTRO. But as we’ll see below, this is easier said than done.

In short: LTROs are subsidized loans from the ECB to private banks. As Mario Draghi said today: “if they were not a subsidy, nobody would take them up.”

So… are TLTROs a good idea?

There are at least four reasons why we are sceptical about the ECB’s move.

First, the ECB’s approach is time-inconsistent. Indeed, if the European Central Bank was really committed to respond to the slowdown already underway in 2019 (as its worrisome forecast showed), then the TLTROs should be ready for activation as soon as possible, not in six months from now.

Second, anyone who understands banking knows that technically, banks do not need ECB money, TLTROs or other or forms of “loanable funds” in order to lend more to the economy, since commercial banks create money when they make loans. Hence, the theoretical logic behind TLTROs appear to be rather dubious.

Which brings us to the third reason: if banks do not need ECB money to issue more credit, why do TLTROs at all? Simply put: we suspect the ECB’s real objective with TLTROs is not so much to stimulate the real economy, but to help crisis-hit banks to have enough liquidity – or to put it more bluntly, to ensure dodgy banks stay afloat.

Fourth, it is very difficult for the ECB to make sure TLTROs are actually “targeted.” The ECB has no technical means to trace and control how banks use the borrowed money. Such control is only carried out a posteriori, and of course it is extremely complex, or nearly impossible, to assert whether the new lending will have occurred thanks to the TLTRO or simply because of other factors.

What else could the ECB do?

If the ECB is really committed in avoiding another recession, it should be seriously exploring other options such as helicopter money. TLTROs directly to households, as proposed a long time ago by Eric Lonergan.

Sadly, today Mario Draghi said the ECB did not consider “helicopter money”. But let’s be optimistic: they have until September to figure the details out…

Do not be frightened away by the term NAIRU. It is rather simple to understand and is explained in the article. Although one of the key theoretical pillars of neo-liberalism is has been found to […]

It took us a long while to find an adequate article concerning the outrage that occurred yesterday in London. This piece by Jonathan Cook brought the most important strands together. Thus we selected this article […]