The Biden tax plan is radically different from anything we have seen from the US for a number of years.

The plan could be summarised as an attack in a single problem, as suggested by this chart within it: 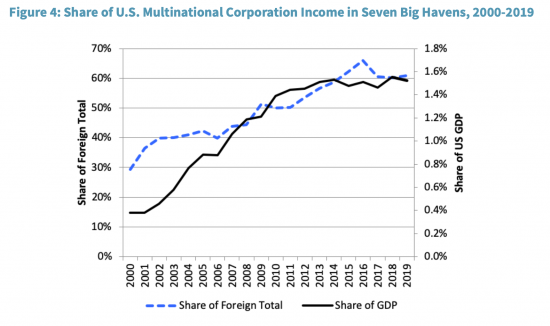 As I have, for longer than most people, been arguing, tax havens have been used to mount an assault on the right of states to tax, and even if the damage has been better contained from about 2012 on it has not been reversed. When 70% of US foreign earnings are in tax havens there is something seriously wrong with corporate behaviour, which can only be explained by a desire to undermine the US tax system.

This has had a real cost, most especially on American labour, which has been asked to make up the tax shortfall: 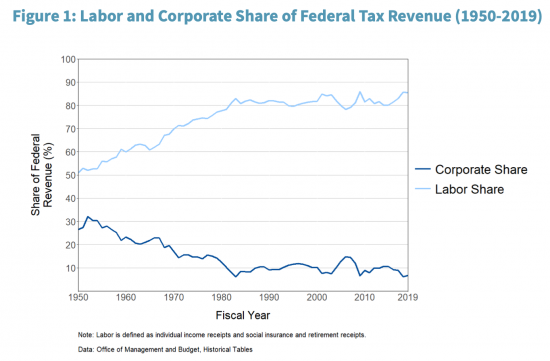 Class warfare has taken place in the USA, and the wealth owning classes won. 20% of the overall US tax burden was shifted from the corporations largely owned by the wealthy onto working people. The tax haven assault was not only on the right of government to tax, it was also on the people of the world. As corporate profits have risen – and they have – corporate tax revenues have fallen: 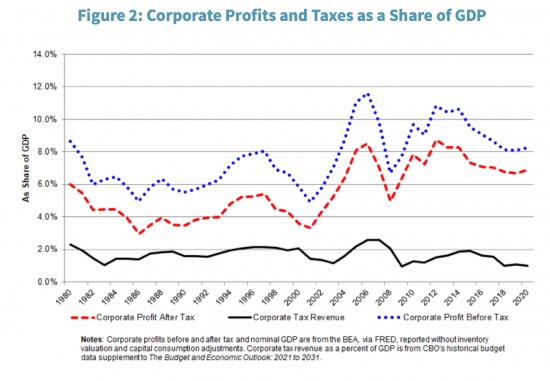 Not many of us thought that Biden would be that left wing. But he’s doing what so many of us wish Labour would do in the UK, and that is stand up against the power of corporations.

So, what does the plan do? First, let me set the political scene.

It’s fair to say that Biden is not the first person to notice this. The US has been well behind the curve in doing so. Trump, of course, set out to make the situation worse. What Biden is doing is seeking to reverse a trend in US policy.

In doing so he is reversing Trump’s opposition to OECD plans to reform international taxation. The OECD plan has two parts. The first looks at how to tax tech companies and cross-border digital services, which is an issue most especially of concern to the US, and the second looks at curbing tax base erosion by profit shifting into tax havens. Trump would not tolerate an attack on US tech companies. And he was opposed to the global minimum corporation tax charge that the OECD proposed as part of the latter.

The reality was that these talks were to a large degree stalled. Technical progress was taking place, most especially on the minimum corporation tax proposal, in which civil society (led, I would suggest by my old friend Prof Sol Picciotto) has played a large part. But without US cooperation they were not going to reach an agreement.

So, in political terms what Biden has done is reopen the door to negotiation. He has not innovated as such. Rather he’s saying ‘let’s talk’. But that’s a big deal, at least after Trump.

What is he proposing then? I’ll use the reports own words. The aim is to:

Building a fairer tax system that rewards labor. In recent decades, the share of national income derived from labor has declined relative to that derived from capital. The plan would counter the incentives in our tax code that contribute to that trend.

The aim is to tackle growing inequality. I welcome that.

And, the further aim is:

But remember, CBCR does not create a tax base in itself. What it shows is when it is likely that profit has been artificially shifted to a low tax jurisdiction. It can even suggest the tax lost, but it does not correct it, by itself. So the next step is vital:

Ending the race to the bottom around the world. Countries too often compete for multinationals’ business by reducing corporate tax rates which makes it difficult for the United States and other countries to meet revenue needs. The President’s plan provides a strong incentive for nations to join a global agreement that implements minimum tax rules worldwide through the denial of U.S. deductions on related party payments to foreign corporations residing in a regime that has not implemented a strong minimum tax. This aspect of the plan is designed to help level the playing field between foreign and U.S. companies.

A global minimum tax rate means that a shift can be made, but that tax will still have to be paid. However, note the orientation within the plan: the aim is to increase US yielded by denying tax reliefs in the US when the overall rate of tax paid is insufficient. There is no plan to help other countries collect tax. Is that sufficient and does this really help developing countries who lose out from this process as least as much as the US? That is an issue to be addressed. I am not clear it will work in their favour, as I would desire, as yet.

The minimum tax rate is supported by this:

Requiring all corporations to pay their fair share. To ensure that large, profitable companies pay a baseline amount of taxes, the President’s plan would impose a minimum tax on firms with large discrepancies between income reported to shareholders and that reported to the IRS. It would also provide the IRS with resources to pursue large corporations who do not meet their tax obligations, reversing a trend toward fewer corporate audits.

Gaming the system is meant to end. So, the indication is that there will be an attack on the abuse of tax reliefs. That would be most welcome.

Perhaps most significant of all is the reference to increased audit. The IRS has been deliberately underfunded by successive tax administrations – a trait also seen in the UK – and that has had consequences. This chart tells the story: 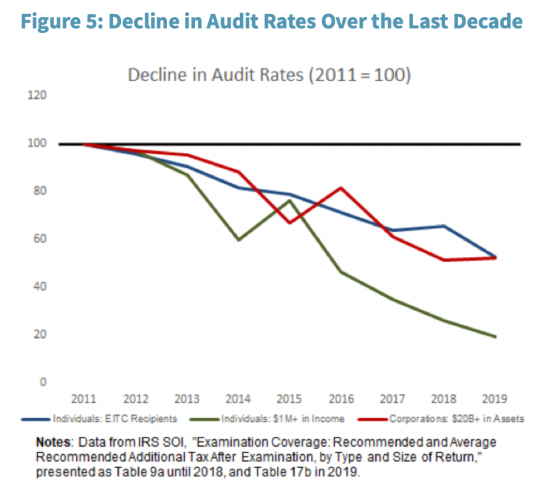 Tax abuse in the USA has been encouraged by this trend, which is to be reversed, I hope.

So, two other issues, before I move on to discuss whether this will work. First, Biden also says the plan is about raising revenue to pay for investment. We know that is not required. The investment could happen anyway. Tax will never as such pay for it. But, although it is not a narrative for the plan is. I would make that narrative all about tax justice. The tax justice story is plenty strong enough to support this change, but it’s not clear that Biden believes that. That he gets this aspect of the narrative wrong is the weakest part of the plan.

A strength of the plan is the focus on green issues:

To complement initiatives in the American Jobs Plan that would change the path of energy production in the United States and provide resources for a new research and development agenda, the tax plan would end long-entrenched subsidies to fossil fuels, promote nascent green technologies through targeted tax incentives, encourage the adoption of electric vehicles, and support further deployment of alternative energy sources such as solar and wind power.

Particularly good here is the implied plan to end what are called ‘patent box’ tax reliefs and to shift support for innovation out of the tax system and into direct subsidy for chosen projects. I warmly welcome that. Tax relief is not the answer to all questions and unnecessary reliefs and much abuse are often facilitated by it.

So, will this work? Not perfectly, of course. The minimum tax suggested is not ideal. The suggestion that it might only apply to the very largest companies is too narrow. The failure to support tax revenues in either countries may be insufficient to achieve real reform. The devil will be in the detail, particularly on how the tax rate will be calculated, although there is ample enough suggestion that this will be linked to reported accounting profits to suggest that the thinking is in the right direction.

But, let me also be clear that I have never felt that reform works on the basis of the detail alone. What matters as much is the direction of travel. The move has to be towards corporations knowing that if they cheat it will not work.

A country-by-country reporting basis of assessment is harder to cheat than existing systems.

A global minimum tax rate of 21% hits hard at tax havens, including the likes of Ireland and Luxembourg, which is especially welcome.

The attack on gaming tax reliefs domestically is a direct assault on the tax planning industry.

The suggestion that subsidies may move outside tax is an indication that pork-barrel politics on tax may end.

The increase in audit, if it happens, will be very important indeed.

The attack on the class warfare waged from tax havens is vital.

The whole measure, seen as a whole, is not about the detail. It is about saying to companies that they should stop playing games because they will not work. That was always the aim of suggesting country-by-country reporting, unitary tax apportionment (implicit in all Biden proposes) and minimum tax rates, which I have long been linked to.

In essence this is a major behavioural shift to change the rules of the game. There will be issues to criticise but this behavioural change is the key issue. It is very welcome.

This is the text of the interview given to Sega Newspaper at the occasion of the publication of “Capitalism, Alone” in Bulgarian. The text in Bulgarian is here. Branko Milanović is an economist specialised in […]

Can workers access their data and use it to build their power? The Gig Economy Project looks at a fascinating case study from Geneva, Switzerland, to find out. Every worker in Europe has the right […]

Notes From Below – Wildcat strike at Amazon

A report of the recent wildcat strikes currently sweeping through Amazon warehouses in Britain, from a worker on the shopfloor. This article was written by an anonymous author who works at an Amazon warehouse Notes […]