As Nicholas Stern wrote in his famous report: “Climate change is a result of the greatest market failure the world has seen”. Extinction Rebellion is trying to defend society it should be: democratic, just, and social. The status quo is certainly none of these. Their only concern is profit. Our planet is nothing more than a commodity for them.

As the Guardian noted yesterday afternoon:

Counter-terrorism police placed the non-violent group Extinction Rebellion (XR) on a list of extremist ideologies that should be reported to the authorities running the Prevent programme, which aims to catch those at risk of committing atrocities, the Guardian has learned.

The climate emergency campaign group was included in a 12-page guide produced by counter-terrorism police in the south-east titled Safeguarding young people and adults from ideological extremism, which is marked as “official”.

XR featured alongside threats to national security such as neo-Nazi terrorism and a pro-terrorist Islamist group. The guide, aimed at police officers, government organisations and teachers who by law have to report concerns about radicalisation, was dated last November. 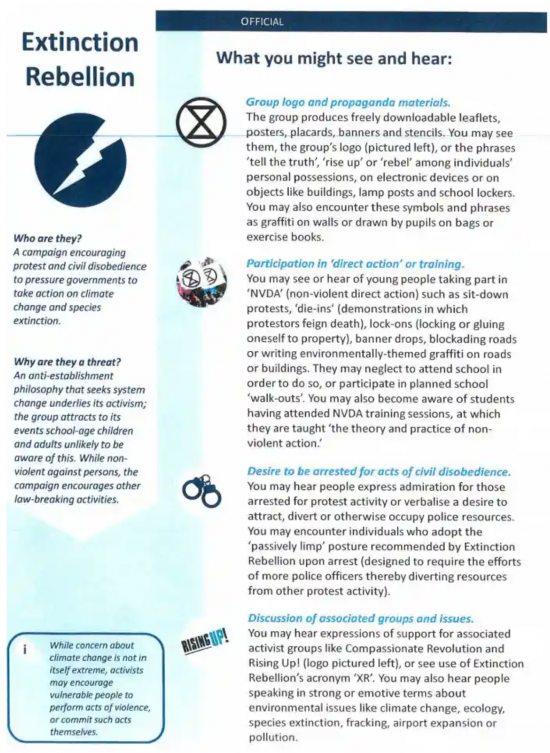 I stress that I am, of course, aware that the police say that this was a mistake. But let me add, of course they would say that. And for the record, let me say that I do not believe them. I am quite sure that someone (and quite possibly a majority) in the police do think XR an extremist organisation.

Also for the record, I have signed up as an XR supporter and so find myself labelled as an extremist. I have, however, never been to an XR event. That does not mean I would not. I think peaceful, non-violent and respectful protest everyone’s right.

I think there are three obvious things to note.

The first is the definition of an extremist used here. Seeking ‘system change’ is the crime. In other words, what we have is normal. Opposing it is a crime. And this is true even when, as is apparent from climate science, maintaining that so-called ‘normal’ has the likelihood of making human life on Earth very difficult, if not impossible because of the stresses it creates.

Second, there is the assumption that change must only take place through the process of asking nicely. If ‘please’ won’t do then the person asking is in the wrong, and so an extremist. And yet change has simply not happened in this way. Change either happens as a consequence of war, which I hope we would rather avoid, or as a result of the actions of those willing to violate existing norms. And since, as a matter of fact, those who created those norms tend to have considerable personal, intellectual and even financial capital invested in them, their reaction to a request to change them is exceptionally  unlikely to be positive. Deviant behaviour of some form is, then, the invariable resort of those seeking change. And since change has actually been the norm throughout human history, it is the defenders of the status quo who should, in many cases, be defined the extremists: it is their behaviour that is usually anti-social. Nowhere is this more true than in the case of climate change.

Third, what I find quite astonishing is what this supposed mistake says about the mindset of those who wrote, authorised and circulated this document (and the fact that many would have been involved completely blows the cover of the ‘mistake’ claim). First they can label compassionate, informing, caring people whose concern is unselfishly focussed on the future of human and other life on our planet as extremists. Then they can claim this was a mistake, when glaringly obviously this description was approved. All that actually happened was that they were found out, so they changed their story, like a common criminal. And, with respect, no one is taken in. The police say that XR might mislead vulnerable people. I suggest it is the police who are deliberately seeking to mislead. And it really does not help their case that they do so. Finding out more about the processes that resulted in this claim being made, and requiring a consequent process of police re-education, might be the most useful outcome of this episode.

One final thought: I was about to use the word fiasco rather than episode in that last sentence. But I can’t. This is not a fiasco. This was part of a deliberate aim is to make climate activism extreme to preserve the current market based destruction of our environment. The question as to who this reveals the real extremists to be has to be asked. And the answer is not XR.

How might a Green New Deal be imagined in the UK context? And what are the challenges that would face advocates of the GND given the current political and institutional climate? Part 1 of Michael […]

War is the Greatest Evil, An Interview with Chris Hedges

Hedges has written another book about the subject titled War is the Greatest Evil. In this new book, Hedges draws on his firsthand experience to tell us the story of the hidden costs of war […]

An excellent analysis of what is coming in British politics, which will see some major changes. But then, Theresa May had much the same message, but continued the Tory neo-liberal policy without blinking. Far from […]