We have one tax scandal after the other. Not only do things not improve, they get worse.

Big multinationals are paying significantly lower tax rates than before the 2008 financial crisis, according to Financial Times analysis showing that a decade of government efforts to cut deficits and reform taxes has left the corporate world largely unscathed.

Companies’ effective tax rates — the proportion of profits that they expect to pay, as stated in their accounts — have fallen 9 per cent (two percentage points) since the financial crisis. This is in spite of a concerted political push to tackle aggressive avoidance. Governments’ cuts to their headline corporate tax rates only explain around half the overall fall, suggesting multinationals are still outpacing attempts to tighten tax collection.

The FT has this chart: 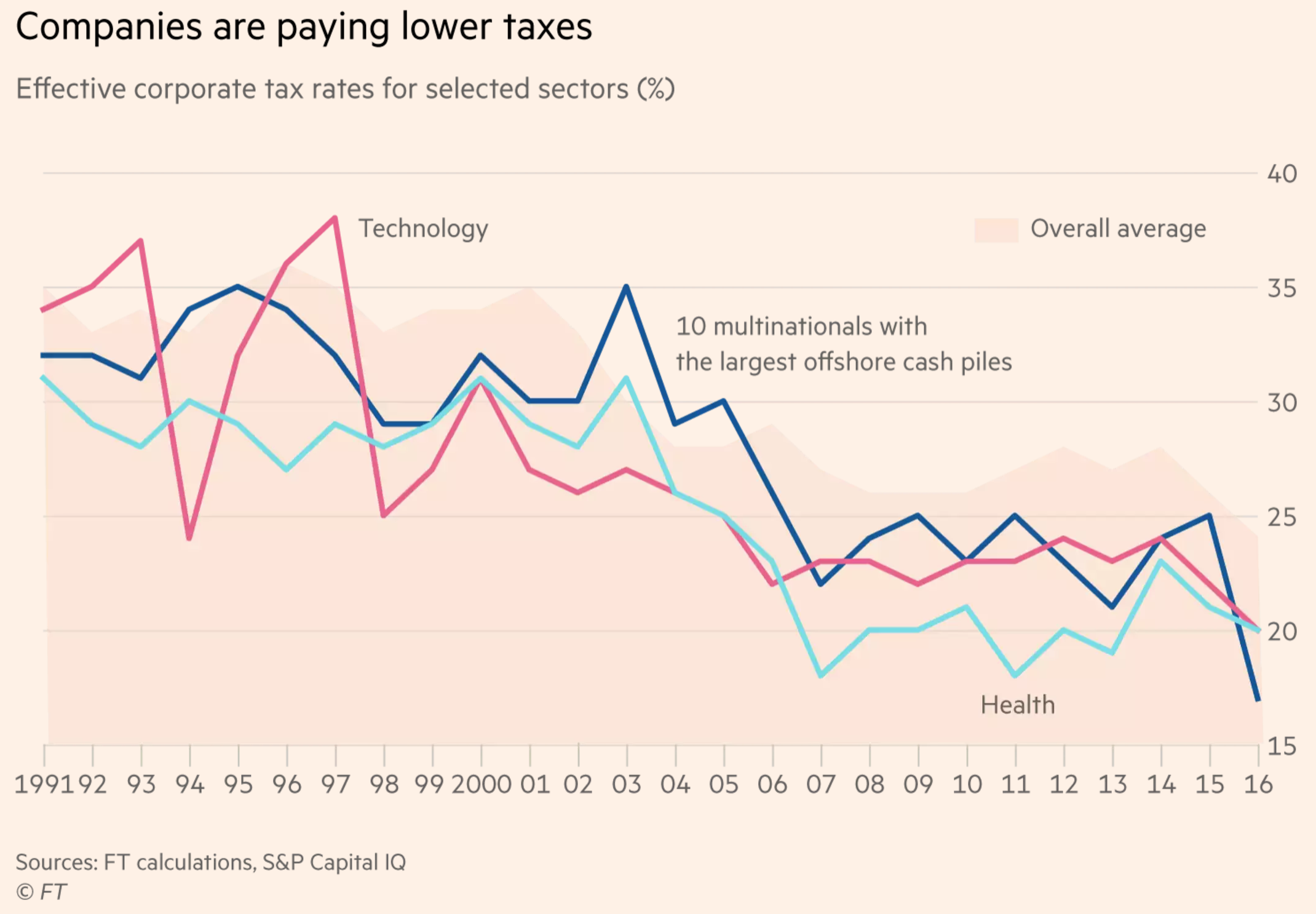 And as they report on methodology:

Drawing on 25 years of financial statements, the FT examined the tax rates paid by the world’s 10 biggest public companies by market capitalisation in each of nine sectors. The tax rates reported by the 10 multinationals with the largest offshore cash piles were also examined. The results show that the corporate contribution to public finances has fallen since 2008 as a proportion of profits — whether measured by headline rates, reported effective rates, or the rates actually paid to governments.

And as they add:

The results highlight how the long downward trend in corporate tax rates set by the countries that make up the OECD continued at a time when taxes on consumers and workers were rising after the financial crisis. Since 2008, countries have cut headline corporate taxes by 5 per cent while governments on average have increased personal taxes by 6 per cent, according to figures from KPMG, the accountancy firm.

So what is happening?

The fact is that despite all the efforts to end international tax abuse by multinational corporations a Faustian pact has been made between these entities and governments, including that of the UK. As a result whilst measures have supposedly been taken to tackle abuse, tax rates have come down rapidly. As I showed recently, this is the plot for the EU, with the UK highlighted: 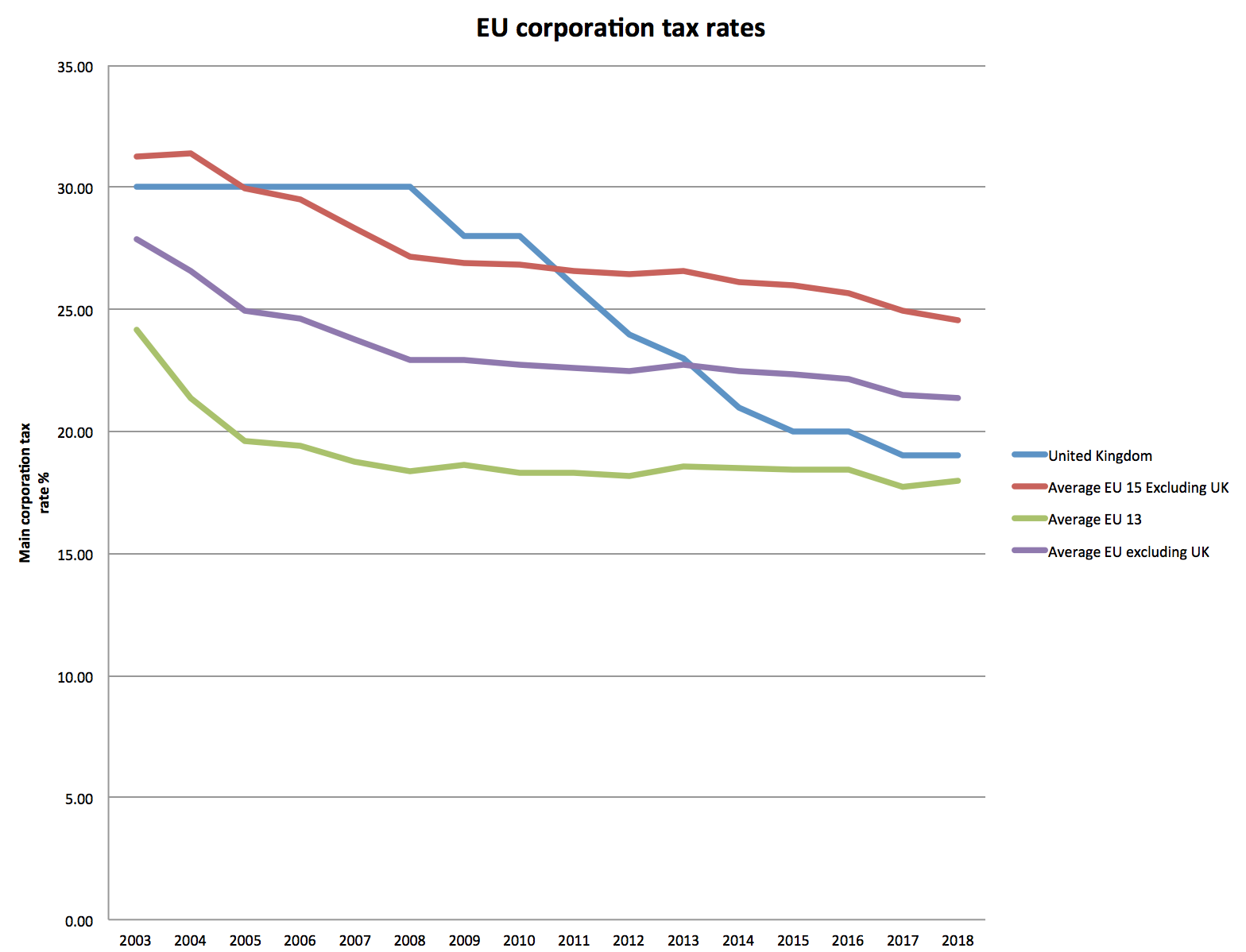 And rates are not the only story. The UK has massively shrunk its corporation tax base since 2009 by taking all dividends from subsidiaries outside the UK form tax, by relaxing its controlled foreign company regime considerably meaning few tax haven subsidiaries are now challenged, by being lax on transfer mispricing and by introducing schemes like the patent box to encourage tax competition and low effective rates of tax.

The UK is not alone in this, of course. But the result is that despite abuse probably reducing yield has fallen further.

And don’t believe the stories that the UK corporation tax yield is rising. That’s the unadjusted figure. Yield is only rising because there are three times as many companies in the UK now as there were in 2000: of course it should have risen as a result. But that ignores the massive cost in lost national insurance as a result of avoidance by contractors that has driven much of this.

The reality is that the UK government has, like others. driven inequality upwards by adopting this approach. Another chart in the FT illustrates the point: 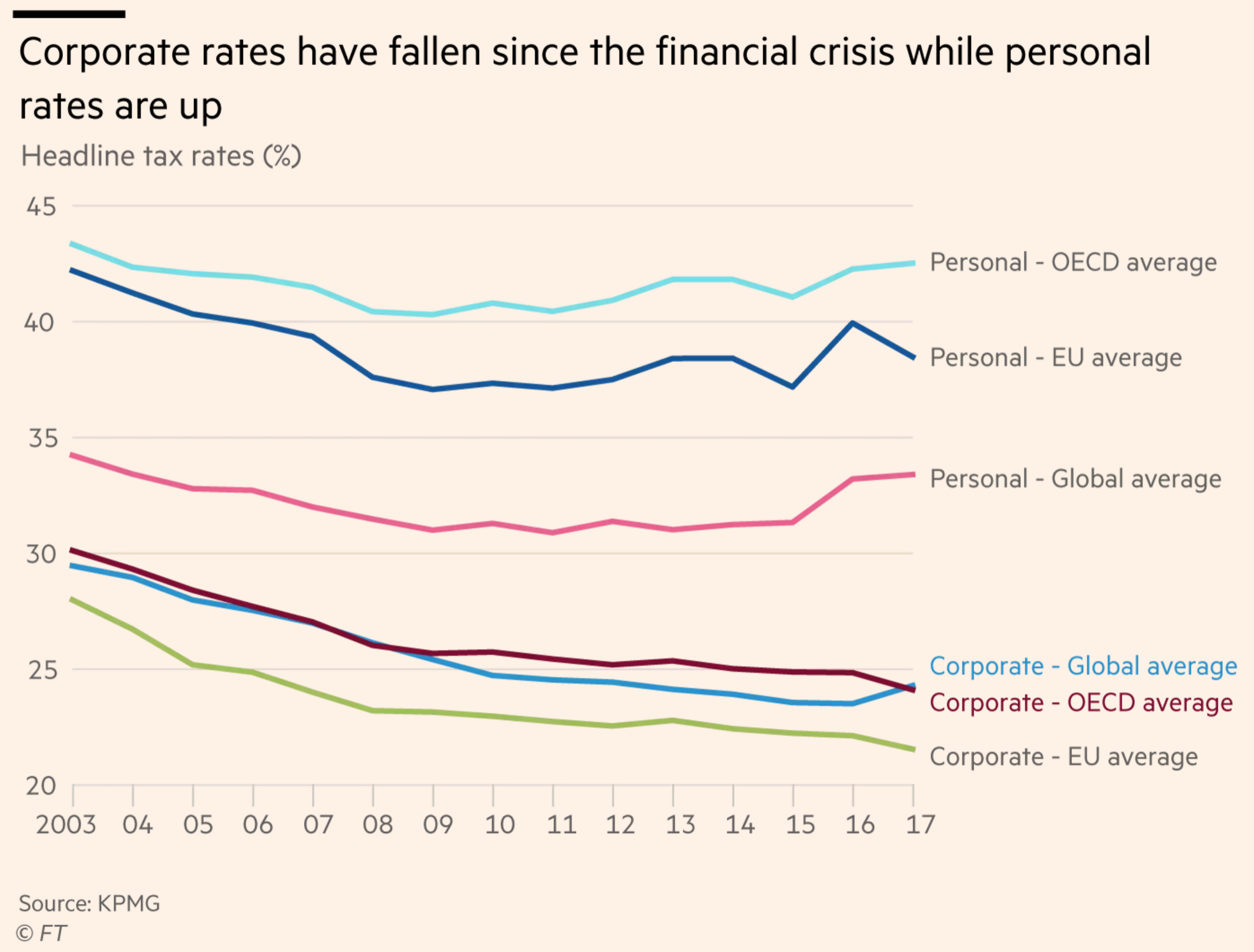 The burden of tax is being shifted from  business to individuals, and from those who do not work to those who have to work for a living.

And then people wonder why populism is on the increase. The reason is obvious: the politics of countries like the UK promotes populism as surely as it promotes inequality, social stress and the injustice that results when austerity is imposed  as tax yield is given away to those who could afford to pay it.

People have a right to be very angry. I just wish they were more so: then we might get change.

A good analysis of the failings of the Japanese economy, which are becoming increasingly similar to those of other developed economies. Michael Roberts is an Economist in the City of London and prolific blogger Cross-posted […]

The importance of political legitimacy. Branko Milanović is an economist specialised in development and inequality. His newest  book is “Capitalism, Alone: The Future of the System That Rules the World” Cross-posted from Branko’s Substack blog […]