Although Richard Murphy is writing about the United Kingdom, this is a pernicious process occuring throughout most of Europe. 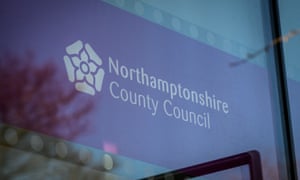 Northamptonshire was first. East Sussex second. There will be a third, fourth, and maybe many more. Local authorities in England are going bust, unable to meet anything more than their basic legal obligations (and, I very strongly suspect, not even that in due course). In the sixth largest economy in the world we cannot apparently afford descent social care, child protection, bus services or the other vital, and very often unseen, services that local authorities provide. Let alone libraries.

This was foreseeable, of course. When George Oborne decided on austerity he imposed it first of all on those furthest from him, so that his (and his Westminster colleagues)  risk of suffering adverse reaction was minimised. He is a politician of the most cynical variety, after all. And that meant he picked on the most vulnerable.

Those were the weakest in society.

And the poorest communities in the country. The following data comes via Naked Capitalism and Thiemo Fetzer: 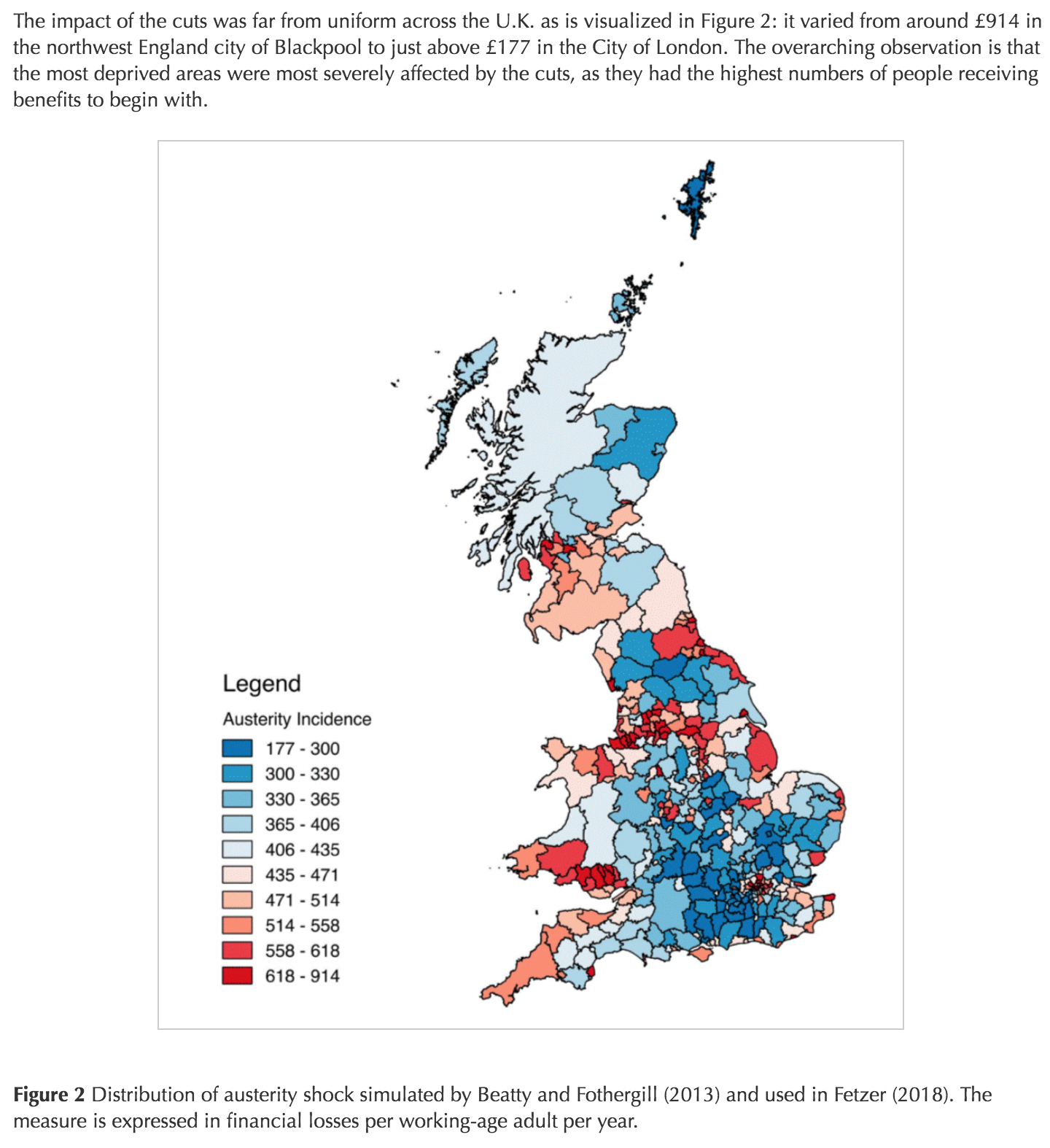 And he picked on local authorities, because he could claim that their spending was not his responsibility. In some cases spending has been reduced by 60% as a result.

And somehow it was assumed that there would be no consequence to this. It was, after all, to use the logic of the Taxpayers’ Alliance that Osborne bought hook, line and sinker,  just the local bureaucrat and the ‘scrounger’, who supposedly validated those council officials role in life, who would suffer for this. The rest of society would, supposedly, be liberated from their interference and the burden that they represented.

The protest of those professionals at the front line was ignored.

The warning that those most vulnerable were really suffering was dismissed: they should stop twitching the curtains and get out to work (yes, Osborne, said it).

The vilification knew almost no limits.

And some councillors actually believed it. And they believed that they should outsource to save money. And cut taxes, because they were a ‘burden’. How wrong they were.

It’s taken eight years but the consequences are now glaringly apparent. We have bankrupt local authorities, effectively unable to function any more.

Local democracy in the UK has failed. Just think about that for a moment. The Tories are literally destroying a tier of government.

But that’s the existential crisis. More directly, children will suffer as a result.

And so will the elderly.

And those who need care.

In fact, almost all those who society should protect, but who Cameron and Osborne thought not worthy of consideration, will now pay the price for their callousness.

And what is the reaction of the government that is imposing this deliberate act of cruelty (no other word will do) on millions? I heard a Minister say this morning that they have increased funding to local authorities this year by £2 billion because of the success of their austerity policies.

I did not swear at the radio. Or cry. Although both could have been justified. I instead struggled to imagine how this person (I did not bother to catch his name and anyway do not wish to make this personal: the whole Tory party is responsible for this) can live with himself. And how he could have had such an empathic bypass that he can talk utter nonsense when the facts scream that what he is saying is not just nonsense, but blatantly wrong.

Whilst Brexit distracts us this country is in a real crisis.

As a democrat I mourn what is happening, and the consequence it will have for local accountability.

But much more importantly it infuriates me that the capacity we have to create money is not being used to solve this crisis. In the world of commerce, and of individual responsibility, we have long learned that although debt forgiveness, by allowing a person (or company)  to go bankrupt is essential if we are to accommodate  the inevitability of failure within society, even if it creates moral hazard,  and yet, apparently, there is no way that we can consider this possible within the realms of government. So the people of Greece have had to suffer for the mistakes of their government,  their bankers,  Goldman Sachs,  German bankers and the European Central Bank. We could, of course,  have waived Greek national debt.  Or it could have been repurchased by the ECB  under its trillion euro plus quantitative easing programme.  But neither was done.  It was thought necessary for the people of Greece to learn a lesson from something that had never been their fault.

And now,  very obviously, this Tory minister and the government that he represents wants to make sure that the people of Northamptonshire, East Sussex, and wherever follows,  will also learn a lesson for which their only fault is voting Tory. But, of course,  many of those who voted Tory will not think that this issue affects them: when (they will think) was the last time their family needed a social worker? They might be surprised:  just wait until someone gets dementia in the family and then you might find out. But in the meantime, just like the Minister,  some will sit back smugly and think this is not an issue of concern to them.

But it is. We live in community. That is inescapable, whatever neoliberals think. And we need, therefore, to act as a community.

So what should happen? The solution is remarkably straightforward. The debt of the councils who are in dire financial straights, in whatever part of the country they are and for whatever reason the issue arose (let’s not play party politics here: the crisis is too big for that) need to be allowed to turn that debt into bonds. And those bonds need to be purchased by the government using a special QE programme created for this purpose. The debt still exists of course. It should be interest-free. It should be due for repayment not less than 100 years hence (by when inflation will have eliminated it,  if nothing else has in the meantime). The exercise is wholly costless, unless the debt to be acquired is due to third parties under PFI and other schemes, when arbitration on the fair value of cancellation of the sum owing  should be resorted to (taking into consideration the fact that the councils in question are  effectively bankrupt and can legally default on their debts without recourse to central government guarantee) . These councils filling be put back on their feet;  local democracy can be restored;  services can be reinstated and, most important of all, the vulnerable in our societies can be protected.

And all this can be done by simply using the power that the government has to create money out of thin air, just as it did to save our banking system.

Bankers bonuses were protected by QE.

So, too,  should the young, the elderly, the vulnerable, those in need of local transport, and others who depend on local authority services where mistakes have been made, just as bankers made mistakes before 2008.

The analogy is obvious.

And it is wrong that when those suffering where the wealthy a bailout was possible and when they’re the most vulnerable in society that is apparently not possible.

Action on this is essential. And possible. Now. We can demand it. Please do. Forget the risk of moral hazard. Get on with caring about those who are impacted.

And if anyone is to be impacted, make sure it is the councillors who let this happen, all of whom who share the responsibility by having been in the administrations that bankrupted their authorities should be barred from public office for lengthy periods of time.

Alpaslan Ozerdem – Turkey’s snap election yields surprises on all sides – what next?

By Alpaslan Ozerdem, Coventry University It was another surreal night in Turkish politics. That the elections were suddenly brought forward by more than a year was a surprise in itself – but the standout surprise […]

Richard Murphy: The banks are using this crisis to demand that we go back to the rules of 2007 so that they can exploit us all over again

This is the real danger, that the financial corporations use the corona crisis to further their interests, not to mention receive hundreds of billions from the state. Read here